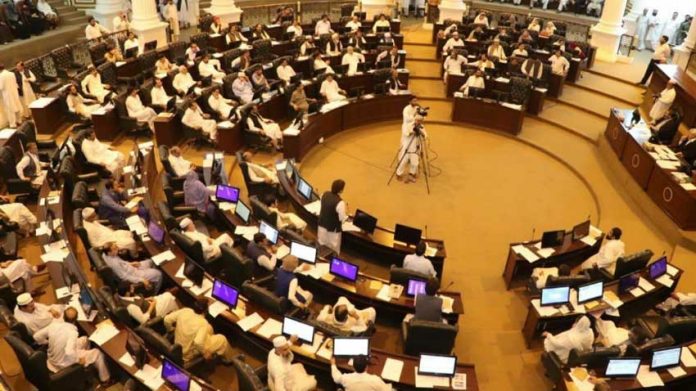 PESHAWAR: The Khyber Pakhtunkhwa (KP) Assembly on Wednesday passed the provincial budget for 2019-20 fiscal year despite the ruckus of opposition members in the assembly.

On June 18, the Khyber Pakhtunkhwa (KP) government had unveiled a new surplus budget for the fiscal year 2019-20 with a record outlay of over Rs900 billion.

At the outset of the budget session of the assembly, the opposition started chanting slogans to halt the government from passing the budget.

The speaker continued the proceeding of the assembly despite the opposition’s protest and the budget was passed.

On Tuesday, the KP Assembly approved three demand grants of different departments worth a total of Rs6.52 billion in the budget. At the same time, the provincial finance department rejected all cut motions proposed by the opposition through a majority vote.

The opposition benches threatened to take the provincial government to court over the budget for depriving them of development funds.

The budget session in the KP Assembly resumed on Tuesday morning to review the 61 demand grants and 680 cut motions. The day’s orders showed that the assembly had approved three demands for grants, including those from the provincial assembly, general administration and the finance department.

A solitary cut motion was submitted from Pakistan Tehreek-e-Insaf (PTI) member Iftikhar Mashwani, but he later withdrew his motion.

They further claimed that even some members of the treasury benches were also annoyed at the budget.

The opposition members expressed their shock and resentment at how they have been ignored in the distribution of development funds, adding that even during the tenure of the previous chief minister Pervez Khattak’s regime, the provincial government had never deprived them of development funds, nor have they ever have declined requests from opposition members to meet.