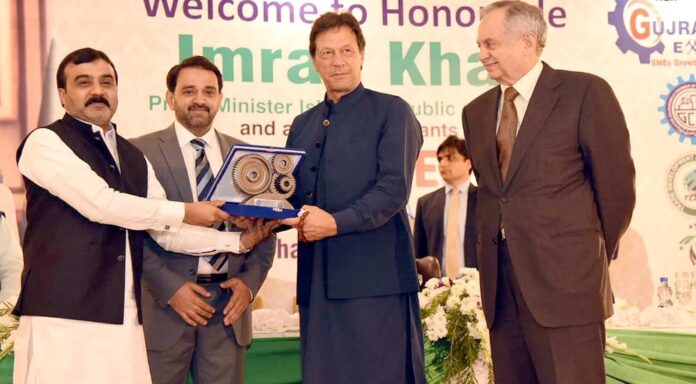 ISLAMABAD: Prime Minister Imran Khan said on Wednesday that he would not give in to unreasonable pressure exerted by the country’s traders and the business community, as it would be traitorous to the country.

“If anyone believes that I will step back after the countrywide strikes by the country’s business and trading fraternity, they should know I will do no such thing,” he asserted while addressing an event organised by the Gujranwala Chamber of Commerce & Industry (GCCI).

The premier said that he had not campaigned over religion to win people’s votes, but had spoken more about emulating the state of Medina.

He said the important rules of the state of Medina included mercy, fairness and justice, and protection of the weak. “However, at present, those who plundered billions are getting air-conditioned services in jails. In contrast, everyone knows how those involved in small crimes are treated in jails.”

PM Khan reiterated that he did not have any property or business abroad and that his life was devoted only to Pakistan.

“They had other interests,” the PM stated, referring to some of the politicians of opposition benches. “Their wealth grew when local currency experienced devaluation. All of their relatives who face cases in Pakistan are abroad.”

The PM said that the country would be unable to progress in future if it remained in the same condition as it was today.

“Some 300 companies pay 70pc of the total tax while the service sector pays one per cent in taxes,” he informed, adding that people had assumed that the Federal Board of Revenue (FBR) was an institution where people’s money was stolen.

“We are going to bring reforms in the FBR,” the PM said.

He warned the country could not survive without taxes and a change of mindset was imperative in this regard.

“We have to bring everyone into the tax net because only 1.5 million of the 220 million people pay taxes,” Khan said. “If we all pay taxes regularly, we will have enough money to pull the country out of the quicksand of loans.”

The premier said his government was creating convenience for the traders and industrialists.

“We are in talks with Afghan officials to curb the menace of smuggling,” he said, adding that the country’s industry could not progress without putting an end to smuggling.

“If the industry is unable to operate [smoothly], how will we pay off the debts we are mired in?”