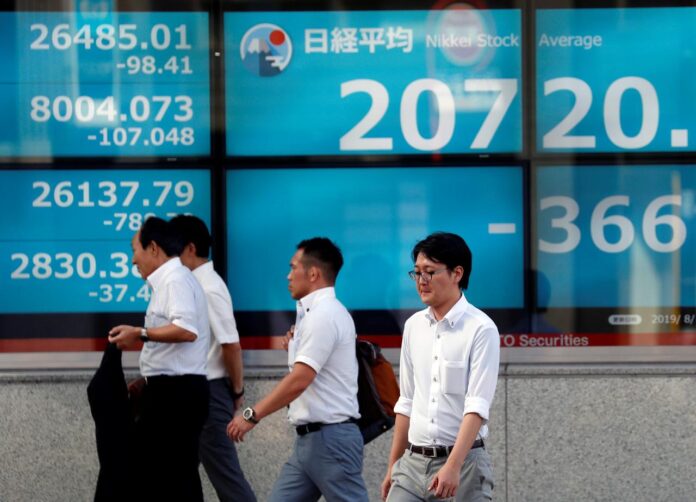 LONDON: A rout in global markets moderated on Tuesday as China kept the yuan on a tight leash after its landmark drop past 7-per-dollar led the United States to label Beijing a currency manipulator.

The trade war between the world’s top economies remained near boiling point, but the heat had been reduced just enough by a firmer-than-expected official Chinese central bank yuan rate overnight to steady some nerves.

Safe-haven assets, including bonds and some currencies such as the yen and Swiss franc, settled down as investors moved tentatively back into the euro, pound and some of the emerging market currencies that have been hit in recent days.

The mood was still fragile though.

“I think the tipping point for a more prolonged negative trend (for risk assets) is quite close,” said SEB Investment Management’s head of asset allocation Hans Peterson, referring to the trade war escalation and other risks such as Brexit.

“We have reduced both European and global equities. We still have a small overweight in EM (emerging market) stocks but just a small one.”

MSCI’s broadest index of Asia-Pacific shares outside Japan had ended down 0.75pc after brushing its lowest since January. It has lost 3.7pc so far this week.

China’s offshore yuan stretched the previous day’s slide, and briefly weakened to 7.1382 CNH=D4, the lowest since international trading in the Chinese currency began in 2010. But it pulled back to 7.0469 after Beijing’s firmer-than-expected yuan fixing on Tuesday.

The Japanese yen, a perceived safe-haven in times of market turmoil and political tensions, touched a seven-month high of 105.520 per dollar JPY= before dropping back to 106.700 in volatile trade.

Brent crude oil futures plumbed a seven-month low of $59.07 per barrel as the trade war raised concerns about lower demand for commodities. Brent last traded at $60.41 for a gain of 1pc as bargain hunting kicked in.