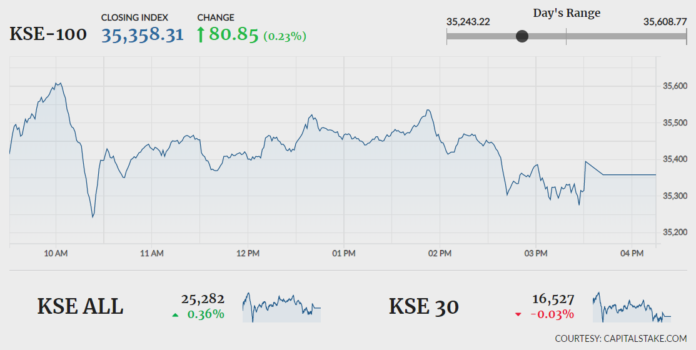 KARACHI: The Pakistan Stock Exchange (PSX) managed to close a volatile session on Tuesday in the green zone. The indices, which opened on a positive note, soon fell in the grip of bears but managed to recover losses in the late hours.

Foreign investors remained net sellers once again on Monday with a net sale of $3.27 million.

On the economic front, total foreign investments in Pakistan increased by 137pc in the first quarter of the financial year 2019-20. Economic Affairs Minister Hammad Azhar, while briefing the media on the country’s economic position, said that the current account deficit has declined by 64pc in the first quarter of the ongoing financial year, whereas the same was down 32pc last year. He said that Pakistan has witnessed a positive foreign portfolio investment of $350 million in the quarter, adding that the stock market rose by 6,500 points during the said period.