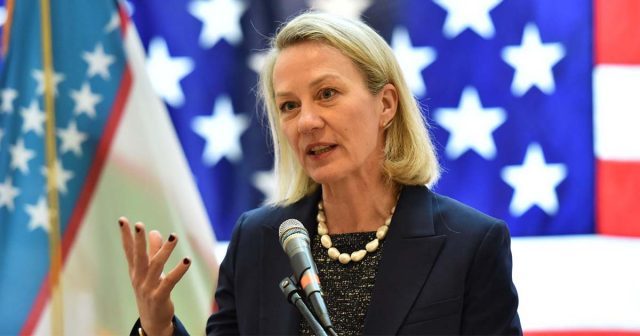 WASHINGTON/ISLAMABAD: The United States has warned Pakistan that it faced long-term economic damage with little return if China keeps pursuing its giant infrastructure push, prompting the Chinese envoy to Islamabad to warn Washington over causing aspersions over something “they don’t have accurate information on”.

The top US diplomat for South Asia, Alice Wells, said on Thursday that the China-Pakistan Economic Corridor (CPEC) — heralded as a game-changer by both Asian countries — would profit only Beijing, adding that the United States offered a better model.

“It’s clear, or it needs to be clear, that CPEC is not about aid,” said Alice Wells, the acting assistant secretary of state for South Asia.

She noted that the multibillion-dollar initiative was driven by non-concessionary loans, with Chinese companies sending their own labour and material.

“CPEC relies primarily on Chinese workers and supplies, even amid rising unemployment in Pakistan,” Wells said at the Woodrow Wilson International Center for Scholars.

The corridor “is going to take a growing toll on the Pakistan economy, especially when the bulk of payments start to come due in the next four to six years,” she said.

“Even if loan payments are deferred, they are going to continue to hang over Pakistan’s economic development potential, hamstringing Prime Minister (Imran) Khan’s reform agenda,” she said.

The United States has gone on the offensive against China’s Belt and Road Initiative, a signature project of President Xi Jinping which aims to build ports, highways and railways around the world.

But Wells’ speech was unusually specific in warning of risks to Pakistan, a historic ally of the United States which has had a turbulent relationship with Washington in recent years over Islamabad’s alleged ties with Afghan Taliban.

While acknowledging that the United States could not come to Pakistan with offers from state-run companies, Wells said private US investment, coupled with US grants, would improve the troubled economy’s fundamentals.

“There is a different model,” she said. “Worldwide we see that US companies bring more than just capital; they bring values, processes and expertise that build the capacities of local economies.”

She pointed to interest in Pakistan by US companies including Uber, Exxon Mobil, PepsiCo and Coca-Cola, with the soft-drink makers together investing $1.3 billion in the country.

“If the US is really concerned about the lack of electricity in Pakistan, why didn’t American companies come to build power stations before 2014,” Ambassador Yao said.

The Chinese ambassador said he was ‘shocked and surprised’ at Wells’ remarks over CPEC which he said ‘fully exposed’ her ignorance of Pakistan-China relations.

He said that both Pakistan and China agreed that all projects related to CPEC are “clean and transparent”.

“We welcome American investments in Pakistan and we don’t have a problem with it. But the US should not cause aspersions over something they don’t have accurate information on,” said Ambassador Jing.

He said 75,000 Pakistanis are directly employed in CPEC projects while there are 200,000 indirect beneficiaries and that over 100 Pakistani companies are involved in CPEC projects, which will generate 2.3 million jobs till 2030 and will contribute 2-2.5pc to Pakistan’s GDP.