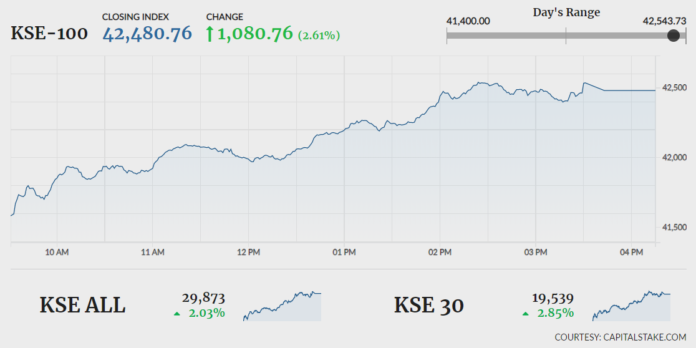 KARACHI: Bulls of the Pakistan Stock Exchange (PSX) continued with the positive momentum on Thursday, as the indices accumulated gains all-day long, helping the benchmark KSE-100 Index cross the 42,000 mark.

Foreign investors remained net sellers in the previous session with a net outflow of $1.88 million.

The KSE-100 index closed the previous year as one of the best-performing indices in the region with a 10pc return. This news particularly bolstered investor sentiments and sparked a rally on the very first trading session of the year and continued for the second day as well.

Meanwhile, the inflation reading for the month of December was largely in line with market expectations hence the mood at the bourse remained unchanged during the day.

JDW Sugar Mills Limited (JDWS 0.00pc) released its financials for the year ended September 30th, 2019. A final payout of Rs10 per share was also announced by the company. Sales surged by 31.81pc YoY, while the company’s gross profit margin increased from 8pc to 10.6pc, which improved its earnings per share from Rs-3.40 in FY18 to Rs9.26 in FY19.