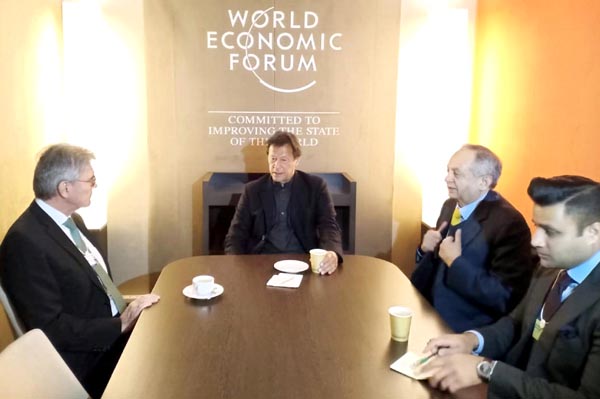 In the meeting held on the sidelines of the World Economic Forum (WEF), Klein “expressed SAP’s commitment to train young software engineers in Germany and using them for software development in Pakistan”, a tweet from the Prime Minister’s office said.

Klein made the comment after Prime Minister Imran offered SAP to establish software labs in Pakistan.

PM Imran is in Davos to attend this year’s WEF. Earlier today, he spoke at the Pakistan Strategy Dialogue, where he said that Pakistan was considered one of the most dangerous places in the world when his government took over but that “we had decided to partner with peace”.

This year marks the 50th anniversary of the WEF where political leaders, business executives, heads of international organisations and civil society representatives will deliberate on contemporary economic, geopolitical, social and environmental issues.

Joe Kaeser, CEO of Siemens, called on Prime Minister Imran Khan at Davos, on the sidelines of WEF.

While appreciating the long association of Siemens with Pakistan’s energy sector, Prime Minister Imran stated that skills development of youth is among top priorities of the government. In this regard, the prime minister expressed his desire for Siemens to introduce high technology skills training programs for Pakistani engineers under the ‘Hunarmand Jawan’ programme.

The prime minister emphasised that skills development will ultimately lead to employment generation and economic growth in the country. He also invited Siemens to support Pakistani universities.

Prime Minister Imran also extended an invitation to the CEO of Siemens to visit Pakistan.

According to a press release, discussions on utilising digital platforms for building Pakistan’s image were held. The Pakistani entourage also discussed the possibilities of promoting tourism, education and attracting investment through digital platforms.