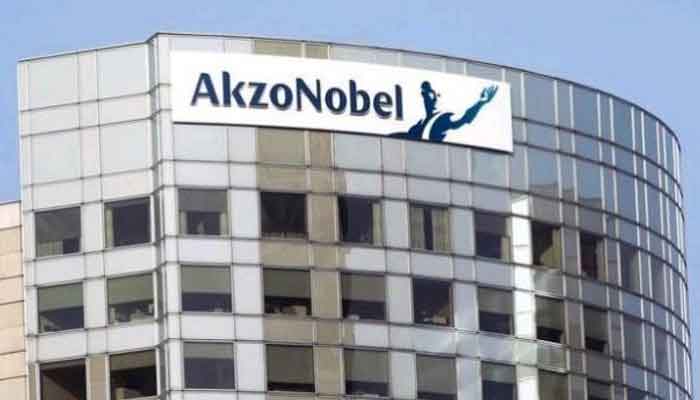 It has been a rough few years at AkzoNobel Pakistan, but there may finally be light at the end of the tunnel. Profits have begun to rise again, and the company is beginning to operate at significantly better efficiency levels than it has been in the recent past.

For the financial year ending December 31, 2019, the company announced that it had achieved revenues of Rs5,611 million and net income of Rs549 million. While revenues were actually down by about 3.5% compared to the previous year, profits had grown by an astounding 41.8% over the same period last year, the highest growth rate in the company’s profits since 2013.

It represents a remarkable turnaround for AkzoNobel, which has been going through a considerably painful period of restructuring and a general slowdown in the construction industry, which has caused demand for its products to sharply decelerate.

AkzoNobel is a paint manufacturing company headquartered in the Netherlands. Its Pakistani subsidiary is among the leading manufacturers of paint in the country and has been a leading supplier to the Pakistani construction industry.

What is particularly impressive about AkzoNobel’s results in 2019 is that they have come as the result of the company’s ability to curb its costs, particularly with respect to selling and distribution costs. AkzoNobel Pakistan CEO Saad Mahmood Rashid has presided over a restructuring exercise that has resulted in a reduction in the company’s headcount in the country, in addition to a reorganisation that has resulted in each division of the company becoming more closely integrated with its global business units in order to be better coordinated across the world.

Rashid has served as the CEO of AkzoNobel Pakistan since November 2017. He had previously headed the company’s decorative paints business, its core business line in the country, a position he held for three years. Prior to that, Rashid worked for 10 years at Reckitt-Benckiser in a variety of sales roles. He previously worked at PepsiCo Pakistan and British American Tobacco’s local subsidiary, Pakistan Tobacco Company.

That a person with primarily sales experience has been able to lead the company at a time of operational transformation is a particularly impressive feat, and one that speaks to the versatility of the CEO in being able to pivot from being focused on growth to becoming focused on consolidation of operations and bringing efficiencies to an organisation that desperately needed it. 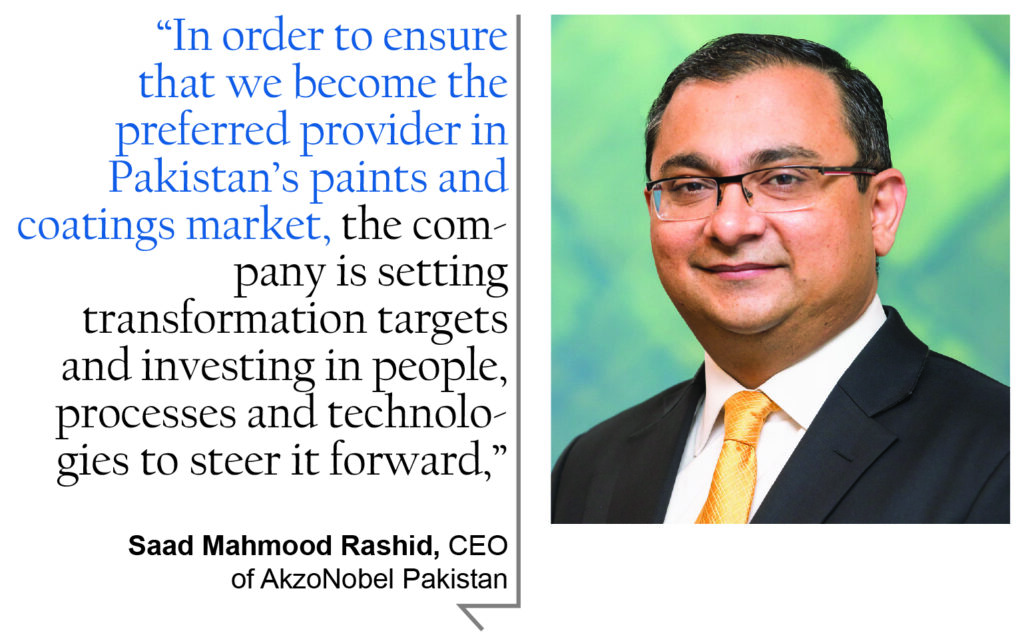 AkzoNobel Pakistan’s margins have improved significantly over the past year, particularly its operating margin, which went from 10.7% in 2018 to 14.2% in 2019. While it is still below its 2013 peak of 18.5%, the company’s performance in 2019 represents one of its best single-year improvements.

Largely on the back of those operational improvements, the company has been able to improve its net profit margin, which grew from 6.7% in 2018 to 9.8% in 2019.

Profit has previously reported that AkzoNobel Pakistan may be interested in restructuring itself, and may also be in the process of evaluating an acquisition of one of its local rivals. “In order to ensure that we become the preferred provider in Pakistan’s paints and coatings market, the company is setting transformation targets and investing in people, processes and technologies to steer it forward,” said Rashid, in an interview last year with Profit. “This has resulted in a few changes including creation of multiple new roles, that would help rebuild a more stable and effective framework to eliminate inefficiencies, in turn driving us forward.” 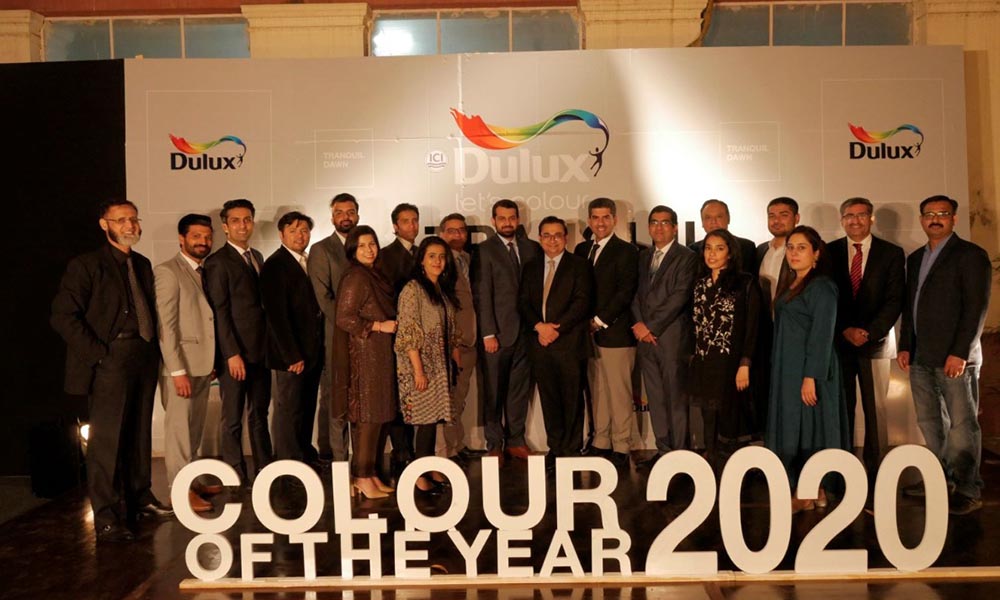 At a time when PPG made its first bid of €83 per share, AkzoNobel’s shares were trading at approximately €60 a share on the Amsterdam-based Euronext stock exchange. PPG subsequently raised its bid twice, first to €88.72 and then to €96.75 per share. AkzoNobel’s board rejected the bid on two grounds: the price was too low, and the merger of the largest and second largest paint companies in the world would likely attract significant antitrust regulatory scrutiny that would significantly complicate the benefits of any merger.

Having rejected the bid, however, AkzoNobel’s board was in a bind: they had to prove to their shareholders that they had the ability to create the same value for the company that PPG was offering through its acquisition offer.

AkzoNobel’s history in Pakistan starts with its January 2008 global acquisition of the UK-based Imperial Chemical Industries, better known by its acronym, ICI, the legendary industrial giant that was, for decades, the largest manufacturing company in the United Kingdom.

ICI’s history in Pakistan starts even before Partition, in 1944, when it started the production of soda ash, a precursor to several industrial chemicals, in Khewra, in district Jhelum. Following independence and Partition, ICI incorporated its Pakistan assets under Khewra Soda Ash Company Ltd, set up in 1952. The company was renamed ICI Pakistan in 1966. At least one ICI subsidiary has been listed on the Karachi Stock Exchange since July 1957.

ICI has always grown in Pakistan through a combination of organic growth as well as acquisitions. For instance, in 1965, they acquired the Lahore-based Fuller Paints, which was later renamed Paintex. The company also created Pakistan PTA Ltd in 1998, which was then spun off into a separate entity in 2000.

In 2008, the global parent ICI was bought out by Dutch paints and chemicals giant AkzoNobel, following which ICI Pakistan became part of AkzoNobel worldwide. In 2010, the company made a decision to focus on the paints business, AkzoNobel’s global specialty, and spin off the chemicals business.

The spin-off, labelled a “demerger”, was completed in May 2012, creating two separate companies: AkzoNobel Pakistan and ICI Pakistan, though at the time, both were owned by the global AkzoNobel. The process to find a buyer for ICI Pakistan began in June 2012, and ended with the Yunus Brothers Group – the industrial conglomerate that owns Lucky Cement, Yunus Textiles among others – won the bid to buy out the industrial chemicals business that was the new ICI Pakistan.

Coincidentally, ICI was the result of the 1926 merger of four companies, one of which was Nobel Explosives, which has its origins under Alfred Nobel, the Swedish explosives manufacturer. Another of Nobel’s subsidiaries became one of the component companies of AkzoNobel.

However, two recent announcements by the company can have a major impact on how the company performs going forward. One pertains to Rashid’s decision to accept another job outside of the company starting next month and the other about the company’s decision to delist itself from the local stock exchange. This is not the first time that the local subsidiary of a multinational corporation has decided to delist itself from the local bourse and this might not be the last. Unilever Pakistan delisted itself from the Karachi Stock Exchange in 2013, and Colgate-Palmolive Pakistan is currently in the process of doing so as well. Resultantly this could well be the last time that we will be reporting on the financials of AkzoNobel Pakistan.

AkzoNobel collaborates with fire association to spread awareness on safety