Negotiations lag on $1tr stimulus for virus-hit US 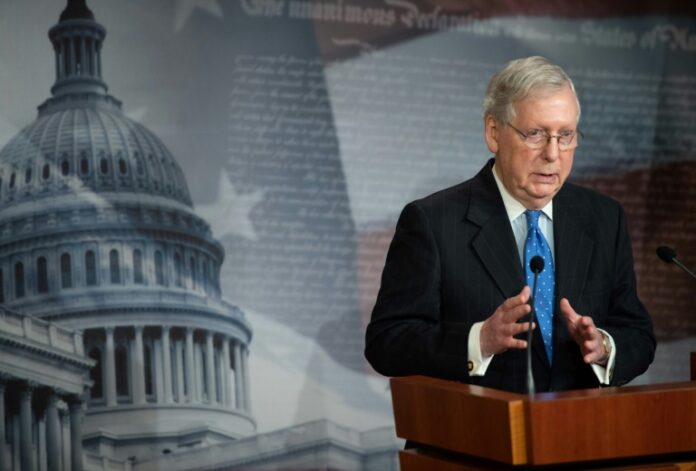 WASHINGTON: US lawmakers urgently negotiating a $1 trillion emergency package to salvage an economy ravaged by the coronavirus missed a Republican-imposed deadline to reach an agreement by the end of Friday.

Senate Republicans were seeking a rapid deal in order to hold a final vote Monday on a bill aimed at allocating vast sums of federal dollars to American households as well as for industries that help form the backbone of a suddenly teetering economy.

But Democrats have been pushing for stronger worker protections and more substantial outlays for families devastated by the crisis, and the party’s top Democrat Chuck Schumer said the Republican package was “inadequate” for millions of Americans facing dire straits.

Senators said they would work through the weekend, and if a deal is struck Saturday then a first procedural vote is likely Sunday.

Negotiators held talks with Treasury Secretary Steven Mnuchin and other administration officials to thrash out a compromise over the massive federal intervention.

McConnell’s proposal includes onetime “recovery rebates” of up to $1,200 for most adults, and hundreds of billions of dollars in loan guarantees to industries hit by the crisis, including airlines, and to small businesses.

“That would allow a bipartisan package focused on immediate challenges to pass the Senate Monday” before it goes to the House of Representatives, McConnell said.

The top Democrat in Congress, House Speaker Nancy Pelosi, joined some of the negotiations by phone. Afterwards, she said McConnell’s proposal “puts corporations ahead of working people.”

“As written, it is a non-starter,” she said in a letter to Democratic colleagues.

Schumer, warning that more dramatic assistance would be necessary, called for a beefed-up worker support plan.

Republicans have signalled they could come back with an additional emergency funding bill after this Phase Three legislation passes Congress, but Schumer rejected that approach.

The race to approve a relief package came as New York and Illinois became the latest states to order residents to stay at home, after California issued similar dramatic containment measures.

The need for rapid government intervention became more apparent as unemployment claims for the week ending March 14 shot up well beyond consensus forecasts due to layoffs from the coronavirus crisis.

President Donald Trump said he spoke by phone with Schumer and that they had a “very good” conversation.

“There’s tremendous spirit to get something done,” Trump said.

The top Republican priorities in the bill are “direct financial help” for Americans, relief for businesses, stabilization of the economy and job protection, according to McConnell.

“None of that is in (McConnell’s) bill,” Schumer told reporters. “We’re going to fight hard to get them in.”

Schumer suggested a deal could be reached, despite chasms of disagreement.

“We’re going to have to work across the aisle… to produce momentous legislation in the span of a few days,” he said. “We will do it, because we must do it.”