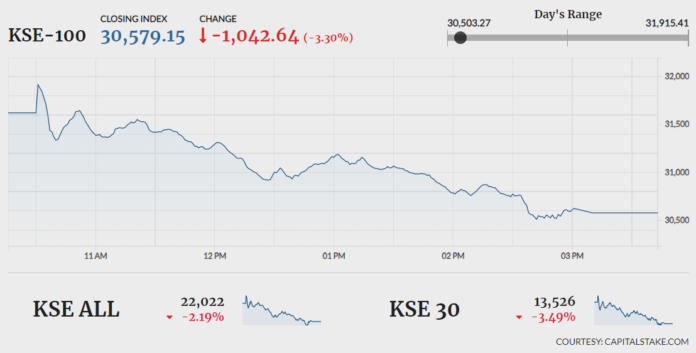 KARACHI: The Pakistan Stock Exchange (PSX) witnessed a volatile start to the week, as the benchmark KSE-100 Index failed to sustain gains accumulated in early trade and crumbled over 1,000 points to fall below the 31,000-mark.

According to analysts, continuation of countrywide lockdowns amid concerns over the increasing number of coronavirus cases in the country triggered selling pressure at the bourse on Monday.

Meanwhile, among other developments, global oil prices sunk following a delay in the meeting between Saudi Arabia and Russia to discuss output cuts that could partly alleviate oversupply in global markets. Brent crude slipped close to $30 per barrel while WTI fell by 3.50pc intraday.

Moreover, in a notification to the exchange, DG Khan Cement Company Ltd (DGKC -4.62pc) announced that the company has resumed production at its Khofli Sattai (DG Khan) plant in view of relaxation allowed to the construction industry from the prevalent lockdown.