Is another policy cut on the horizon? Analysts certainly think so

Profit survey of 16 brokerage houses shows that many believe a cut of 100 basis points is likely, based on decreasing inflation 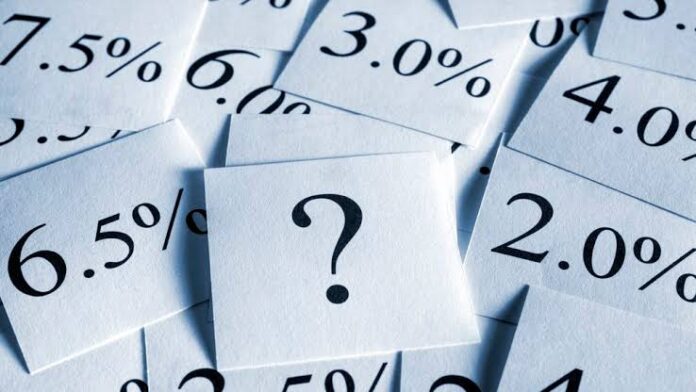 KARACHI: With the State Bank of Pakistan (SBP) announcing on Monday that the yet another Monetary Policy Committee (MPC) meeting would be held on Friday, the question on everyone’s mind is this: is another policy rate cut on the cards?

Analysts certainly think so. Profit surveyed 16 brokerage houses in the lead up to Friday. Of those, 14 were under the impression that the SBP would cut the interest rate further, while a minority of two believed that the interest rate would remain steady. Predictably, not one house said there would be an interest rate rise. 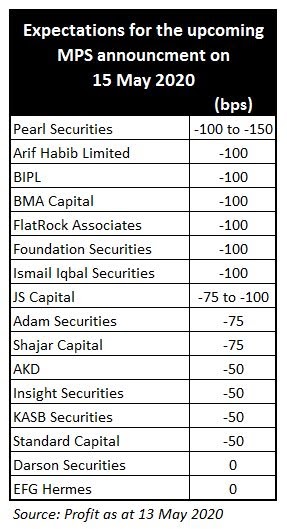 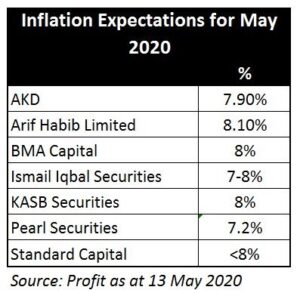 It has been a volatile few months for Pakistan and the world, as the COVID-19 global pandemic has wreaked havoc with global economies. As countries, including Pakistan, have instituted varying degrees of lockdowns, businesses have been shut and workers have stayed home, impacting supply chains and depressing aggregate demand for goods.

Central banks around the world have slashed interest rates, though perhaps none as aggressively as Pakistan’s SBP. In the space of just five weeks between March 17 and April 16, the SBP cut the policy rate by a whopping 425 basis points, from the relatively high 13.25pc to 9pc.

According to a recent report by Bloomberg, Pakistan has cut its interest rates the most this year, out of a survey of nine countries, including the US, Peru, South Africa, Turkey and Ukraine.

It is a marked departure from the SBP’s actions in the last year. At the start of 2019, the policy rate was 10pc. Subsequent policy reviews – in January, March, May, and July – increased the policy rate by a total of 325 basis points to 13.25pc. The central bank kept the policy rate unchanged in its reviews in September and November in 2019, and again in January in 2020, until finally decreasing it in March.

What is the reason for this flip? Well, when the SBP initially raised the interest rate to 13.25pc all the way back in July 2019, it had cited rising inflation as a cause. In fact, by January 2020, the inflation rate had hit a record 14.56pc, according to data released by the Pakistan Bureau of Statistics (PBS). That was the highest level inflation has hit since the current government of Pakistan Tehreek-e-Insaf took office in August 2018.

But then the inflation rate slowed to 12.4pc in February, and then to 10.24pc in March, finally settling at 8.5pc in April.

As part of the International Monetary Fund’s (IMF) loan agreement, Pakistan has been given strict instructions to maintain positive real interest rates (nominal interest rate minus inflation rate). The rapidly decreasing inflation rate has given the SBP wiggle room to decrease the policy rate. 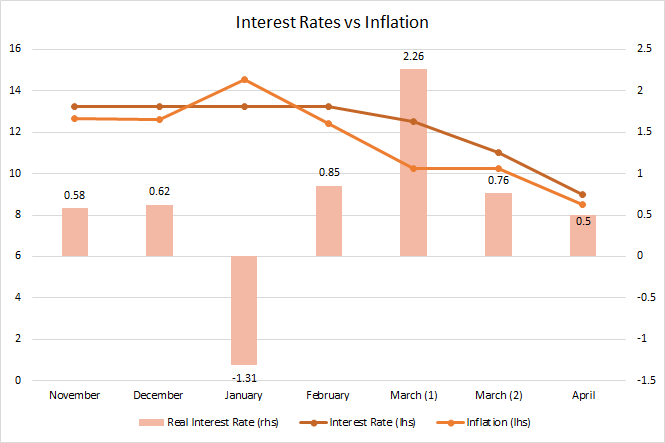 For its own part, the SBP in its monetary policy statement on April 16, the State Bank said that inflation was also expected to be closer to the lower end of the previously announced 11-12pc range this fiscal year, and to fall to 7-9pc range next fiscal year.

These reasons are enough for many to expect another cut in the upcoming MPC, particularly given that the SBP has itself maintained that the inflation rate is mostly driven by cost-push inflation due to supply side shocks. Actual demand-pull inflation is much lower, with some estimating it at 5pc.

For Saad Hashmi, Executive Director at BMA Capital, inflation forecasts for next fiscal year are inline with the SBP’s expectations for 5-7pc.

“Low energy prices will lead to a decline in inflation,” he said. “The key risk in this analysis is dollar-rupee parity remaining stable, and exports and remittances staying relatively stable.” While the latest remittances numbers were stable, there is concern there might be a 20 to 25pc decrease in remittances in the coming months, that might increase volatility in inflation.

Kamran Nasir, the CEO of JS Capital said “The primary function of monetary easing is to control the pandemic we are facing. The role of the SBP is to ensure that there is a stimulus in the economy.”

Nasir also said he was wary of comparisons to other countries, and their interest rates. “People often give the example of the US. But let’s compare what the inflation is in the US and what it is in Pakistan. Let’s not compare our economy to those in the western world; they are financially sound.

Luqman Nadeem, chief investment officer at FlatRock, said “For now, inflation will remain low and continue to fall due to a drop in demand and a drop in oil prices. If the lockdown drags on for an extensive period of time our FX reserves are in a dangerous position.”

He, however, was concerned if the policy rate would have an impact on demand. “Slashing the policy rate will obviously have no meaningful impact because since monetary stimulus alone has had no impact in the developed markets it is highly doubtful that it will help much in a country like Pakistan. We need fiscal intubation but unfortunately, Pakistan is not in a position to provide such fiscal stimulation because of the depressed state of its economy,” he noted.

Arsalan Hanif, equity analyst at AHL felt that an interest rate cut was already imminent. “it seems the fixed income market has already incorporated rate cut as treasury bills of 3M, 6M and 12M are trading at 8.39%, 8.00% and 7.75% which are lower than current policy rate of 9.00%.”

Sateesh Balani, director of research at Ismail Iqbal feels that anything less than 100bps could be a sentiment dampener for the equity market.

Arslan Soomro, managing director at KASB Securities, said he expected inflation to decrease to around 6pc in July. “Yes, the real interest rates would remain marginally positive. In previous war time when the governments are expected to give high fiscal support and run deficit, the only way is to offer government cheaper debt. Pakistan may not resort to monetizing of the debt (when central buy directly buys from the government) since we are still under the IMF program,” he noted.

However, he too was a little concerned about the SBP’s impact: “The aggregate demand will remain depressed even if the cut is +100 bps in the short term. The principle idea here it to borrow the time window emancipating from falling energy prices, to keep the businesses alive which are going to eventually create more jobs and keep the system functioning. On government books, the cut in policy rate will keep the Fiscal Deficit reduced to otherwise double digit numbers, however, IMF and true performance is Primary deficit, that too should be contained.”

Naushad Chamdia, CEO at Standard Capital said, “Slashing of policy rate will boost demand in certain industries viz. cements, long steel, trucks given housing needs and ongoing four big hydro projects. Many related industries will get relief.” He also commended the SBP in creating three month wage accounts for corporates to pay staff, deferring repayments of loans for one year which is helping in difficult times.

Umer Farooq, economist at AKD, was concerned about the SBP’s balancing act. “The MPC of the SBP faces a dilemma, with a need to strike balance between providing immediate relief to the economy and preserving macro stability over the medium term. Benign inflationary backdrop in the near term coupled with the need to kickstart the economy or at least alleviate debt servicing burden merit some easing action from the central bank,” he said.

He further noted: “No amount of stimulus is enough given the enormity of the crisis, but the SBP’s policy response so far has been adequate and timely considering its capacity. However, there’s a need to further ease the process of getting loans under the Rozgar scheme.