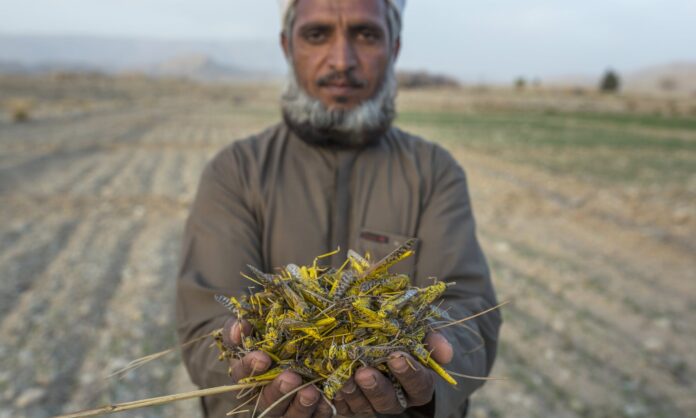 LAHORE: Pakistan is currently witnessing the worst plague of locusts, which has caused huge damages and losses to the farmers, who fear long-term food shortages in the country.

“Locust attacks are likely to cause Rs800 billion loss to the country’s agriculture produce this year and this will be due to the government’s incompetence and lethargic attitude, as it failed to carry out ariel spray effectively,” said former federal minister Awais Leghari.

Meanwhile, speaking to Pakistan Today, Malik Shabbu, owner of a mango orchard in Muzaffargarh, said, “I am totally ruined… I recently bought a 10-acre mango orchard from a zamindar of mauza Budh. But in March and April, rain and hailstorm destroyed my orchard and now, locusts have arrived to devour the remaining fruit left on trees.”

He said he has employed one person only to beat utensils to scare away the pest.

“This is my last effort. Otherwise, I will literally lose everything,” Malik Shabbu said.

Swarms of locusts on Monday attacked the mango and cotton belt areas of Punjab, including Multan, Shujaabad, Muzaffargarh, Bahawalnagar, Jhang, Kot Addu, Layyah and Rojhan. In addition, the locusts also attacked and damaged cotton, mango, and other farms in Balochistan, KP and Sindh.

Malik Tahseen, a landlord in Alipur, feared the recent locust attack would leave him penny less, as he was unsure as to how would he survive the pest attack. “The government must help us by sending a team to spray our fields where locusts are flying in droves,” Tahseen added.

Ghulam Ali, a mango farm owner in Shujaabad, said he had arranged drum beaters to ward off locusts, which had badly ruined the standing crop of mango. “I am completely shattered to see my crop being destroyed.”

Moreover, Mir Balach Khan, a cotton farmer in Balochistan who cultivated the commodity on 55 acres, told Pakistan Today that this was the worst locust attack he had seen in his entire life, as it completely ate and destroyed his cotton crop.

Talking to this scribe, agriculture expert Ramzan Sheikh said that the desert locust was one of about a dozen species of short-horned grasshoppers. They were unique in the way that they change their behaviour – turning from singles to group/social insects that come together into a swarm to hunt for food together.

Sheikh stated that this swarm originated in the horn of Africa, where excess rain triggered a breeding boom. The current swarms in South Asia, especially Pakistan, now have another breeding in Iran, Balochistan and parts of Pakistan’s desert belt, he informed.

The expert said that 40-80 million locusts were estimated in a swarm that spreads over 1 square kilometre. “These many locusts can eat/destroy crops equivalent to the feeding need of 35,000 people in a day.”