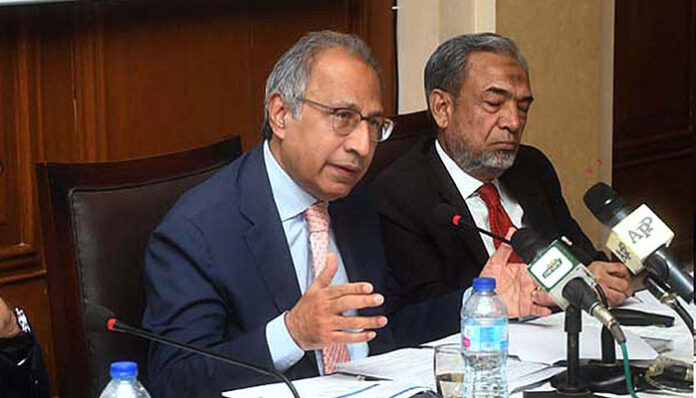 ISLAMABAD: Limiting the scope of work for the Prime Minister-formed Think Tank, the government on Tuesday asked the forum to focus only on three priority areas instead of the six domains identified earlier this month.

During a special meeting of the think tank with Adviser to PM on Finance and Revenue Dr Abdul Hafeez Shaikh in the chair, it was informed that the prime minister wished the body to focus only on three specific areas: boosting social safety nets (Ehsaas and allied initiatives), boosting role of banks and financial institutions in appropriately designing incentives for market participants, and kick-starting low and medium-cost housing projects.

Earlier, the body was asked to prepare their proposals on six selected six broad priority domains which included food security and safety of supply chains, making PSDP and Provincial ADPs responsive to labour intensive propositions and business facilitation through fiscal interventions. Though food security has become an important issue due to a looming threat of locust, flood and other natural hazards in this season, the forum was asked to skip it and give their inputs on other priority areas, sources informed Pakistan Today.

The work done by the banking and finance committee remained the primary focus of the meeting, in addition to feedback from the Committee on Social Safety Nets.

Sultan Ali Allana presented the joint work of the Committee on Banks and Financial Institutions, wherein different improve liquidity and credit for individuals and businesses.

PM’s advisers Abdul Razak Dawood and Dr Ishrat Husain sensitised the need for due diligence with reference to adverse effects of the new scheme on existing remittances/ products, FATF concerns, and harmonisation of all initiatives aimed at the promotion of digital economy.

It was suggested that the experience of the Pakistan Banao Certificate should be kept as a benchmark to plug potential loopholes while offering a new product.

Meanwhile, Arif Habib’s proposal for a reduction in NADRA’s data verification fee received an endorsement from the members, as this wholly public-owned entity should not keep profit as a primary motive in its operations.

The SBP governor appreciated various recommendations of the committee in improving liquidity for individuals and businesses and shared that the central bank, in collaboration with the MoF and the CDNS, was in the final phase of launching a “savings product” for overseas Pakistanis.

He said most of the backend work has already been completed in this regard.

Ishrat Husain, along with other participants, raised concerns over the level of automation and digitisation within Central Directorate Of National Savings (CDNS) and stressed the need for combining tech proposals of the SBP and the committee to offer a more robust and legally compliant solution.

Shaukat Tarin said that the committee has held multiple consultative sessions with the Naya Pakistan Housing Authority and other stakeholders on shaping recommendations for boosting investments in the housing sector and promotion of multiple financing options.

It was further informed that the committee report was ready for sharing with the group members to attract constructive feedback.

Dr Ijaz Nabi shared the committee’s assessment on the Ehsaas programme, with reference to key areas of concerns and briefed the participants about various recommendations shaped so far.

Participants felt the need for engaging Dr Sania Nishtar in the next meeting to have a better understanding on moving forward. Provincial coordination issues were also highlighted which need to be resolved for smooth implementation of matters like tax harmonization.

The adviser shared holistic capture of all main arguments presented in the meeting. He advised the finance secretary to organize a meeting of SBP with Shaukat Tarin, Sultan Ali Allana, and Arif Habib so as to have an understanding of the bilateral point of view on the features, processes and allied aspects of Digital Account Scheme, with a view to evolving a consensus on unified practical approach.

Moreover, other committee proposals also need to be deliberated with SBP in the same meeting to have clarity on the way forward, he added.

It was decided that members of the think tank would share feedback on proposals of various committees to synthesise a unified approach. The Committee on Housing Initiatives was requested to share its report for advance feedback whereas Naya Pakistan Housing Authority chairman and Dr Sania would also be invited in the next session to evolve a consensus on respective domains.

It was unanimously agreed that the think tank would meet again owing to the urgency for finalisation of work.

The adviser said the recommendations of the think tank would also be presented before the PM soon so that final directions from the top forum were incorporated into the budgetary process.