'More than 4,000 traders in Peshawar will be at risk of losing millions if the administration continues to seal business centres' 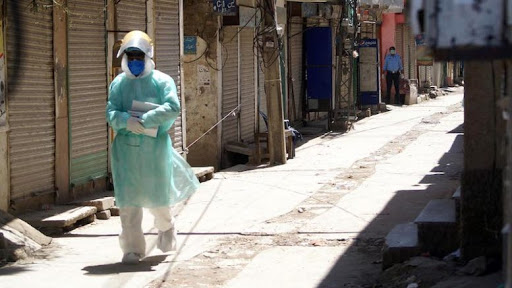 PESHAWAR: The business community of Khyber Pakhtunkhwa has decided to launch an anti-government protest movement against the fines imposed on shopkeepers for violating coronavirus SOPs.

Talking to this scribe, KP Traders Union President Mujeebur Rehman stated that due to the poor policies of the federal and provincial governments, traders were being forced to relocate their businesses to other provinces.

“Under the guise of ‘SOPs violation’, fines of up to Rs100,000 on each shop were being imposed while a number of shops were being sealed,” he said. “More than 4,000 traders in Peshawar’s markets are at risk of losing millions of rupees if the administration continues to seal business centres.”

Rehman said traders were earlier severely affected by terrorism while now they were being robbed in the name of “smart lockdowns”.

The district administration thinks that the imposition of heavy fines on shopkeepers was the best source of revenue generation, he said, adding that in 22 shopping plazas of Peshawar, the administration has so far sealed 3,000 shops.

He recalled that the government had promised interest-free loans and relief in electricity bills to traders affected by the coronavirus outbreak, but none of the promises materialized into reality. “We’ve met the opposition leaders in the province and asked them to work out a plan of action to protect traders from the government’s exploitation.”

Meanwhile, sources said the district administration was sealing the entire market even if they found one or two shopkeepers failing to follow the Coronavirus SOPs.

They said the business community had fully cooperated with the government during the lockdown, but as the restrictions have been lifted, they should be allowed to do their businesses with any hindrance.

The district administration did not respond to a request for comments.

ISLAMABAD: China Thursday expressed its readiness to work with Pakistan to start investment in new projects in the fields of industries, livelihood, agriculture and...
Read more
- Advertisement -