74pc of digital video ad spending in APAC is through mobile: PubMatic

Having made the first contact with the pandemic, the APAC region was the first in the world to either stabilize or contain the situation, resulting in relatively faster economic recovery.

Compared to the rest of the world, the Asia Pacific (APAC) region commands the lead with 74 percent of all video spending occurring on mobile devices. Despite the impact of C19 on the global economy, total mobile ad spending soared in the second quarter of 2020, rising by 62 percent year over year and 30 percent quarter on quarter. The findings are part of the Q2 Quarterly Mobile Index from PubMatic.

Given that the APAC region reacted faster to C19 and recovered or stabilized the outbreak relatively quickly, compared to the Americas and EMEA region, PubMatic believes that growth in the APAC region was more robust, adding that the continual rise in the cost of advertising in the region is also a factor.

In a bid to tackle digital advertising fraud, PubMatic noted that app publishers leaned on fraud prevention initiates to boost revenues, with 44 percent of the top 1000 industry apps publishing app-ads.txt files as of mid-July 2020, largely driven by Android transactions.

“There was a notable spike in adoption during the early pandemic months, before a return to its original, steady trajectory,” said the report. “App publishers and developers continue to rely on these mobile industry standards to protect inventory quality and maximize revenues.”

Introduced by the Interactive Advertising Bureau in 2017, Ads.txt is a text file that app publishers and websites would add to the root directory of their websites to disclose which exchanges were authorized to sell their inventory. Take the ProPakistani Ads.txt directory for instance – each line contains three items — the name of the exchange, the sellerID of that domain on the exchange, and the type. This directly for the yellow journalism site shows that it relies on over a dozen direct and indirect exchanges to sell its inventory. Media verification in the APAC region is just starting to gain momentum, where the initial focus has been on eliminating fraud, according to the Global insights Report 2020 from DoubleVerify.

“Brand Suitability strategies are just beginning to be adopted and refined,” says the report from the digital media authentication solution. “Overall brand suitability incident and block rates increased dramatically in these regions. We anticipate these rates to decline over time, as brands employ pre- and post-bid brand suitability strategies in an effort to increase campaign efficiency.”

Both reports from PubMatic and DoubleVerify insist that digital media verification and its adoption measures are relatively new to the APAC region, with the latter company reporting that the overall brand suitability rate increased 66 percent year on year to 11.4 percent — outpacing the more mature markets of North America and EMEA where rates are generally lower.

“This trend was led by high brand suitability rates in both Malaysia and the Philippines,” said the DoubleVerify report. “That said, the post-bid fraud rate declined 49 percent YoY, most likely due to the increased usage of pre-bid fraud protection. Overall video viewability remained relatively stable – although the rate for Malaysia rose by 78 percent, Vietnam by 31 percent, and Australia by 14 percent, and mobile app video viewability rose by 48 percent overall.” 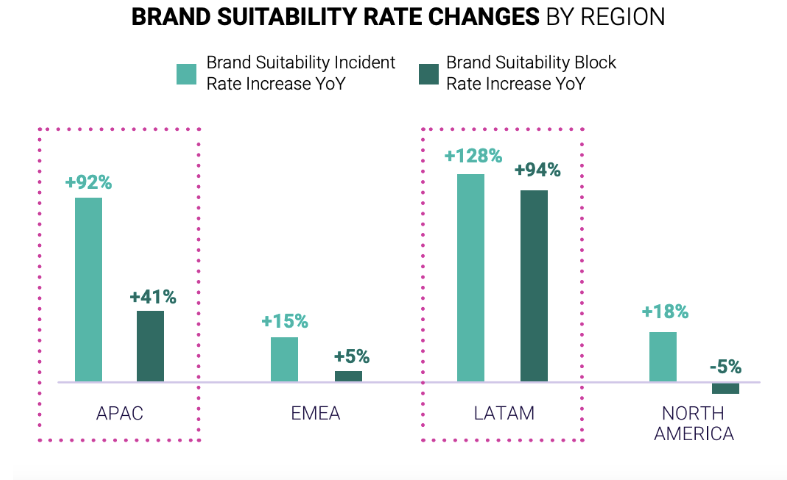