Vehicles stranded at Torkham to be cleared within 10 days: SAPM 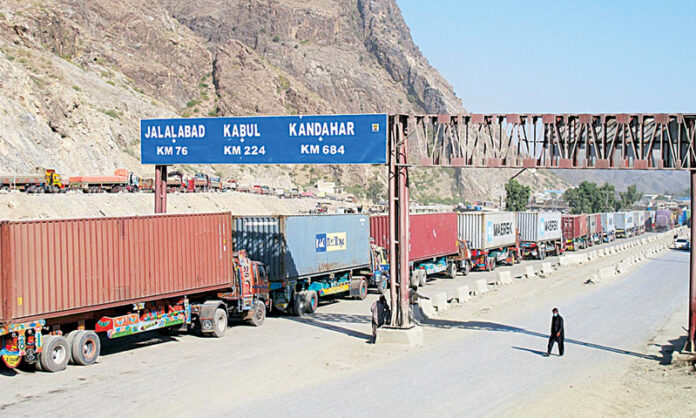 PESHAWAR: Special Assistant to Prime Minister Shahzad Arbab informed on Thursday that as many as 3,300 vehicles loaded with goods had been left stranded on Peshawar-Torkham Highway owing to the corona-led closure of the Torkham border.
Addressing a press conference following a meeting with the provincial high ups, the SAPM said that the relevant departments have been tasked to clear all stranded vehicles within the next 10 days, adding that till Tuesday, 700 to 800 stranded vehicles would be cleared, while parking areas were being specified to accommodate these vehicles.
He said that Hamza Baba Complex in Landi Kotal has already been handed over to the Customs dept, while more space would be provided near Torkham in the next two to three days. Similarly, in Mattni (Peshawar) and Karak, more parking lots were being specified for stranded vehicles.
Arbab said that around 200 vehicles would be cleared from Kharlachi border on a daily basis, while Ghulam Khan border would also be activated by next week after bilateral agreements.
He maintained that Islamabad wanted to strengthen its trade ties with Kabul by increasing the existing bilateral trade volume to $3 billion in the near future.
Referring to the Angor Adda border, he said that the border had remained closed in the past due to the absence of Customs staff. “However, the government has decided to deploy the staff at the border point so as to make it operational.”
He said Karak, Angor Adda, Mattni, Ghulam Khan and Hamza Baba were backward areas and business activities in these areas would provide employment opportunities to the local youth.
“Peace in Pakistan is linked with peace in Afghanistan… if peace and development is restored in Kabul, it would pave the way for Pakistan to access Central Asian markets, which could usher a new era of prosperity and development in the region.”

Arbab said Prime Minister Imran Khan was committed to utilising all the available resources to strengthen the country’s trade ties with all neighbouring countries.