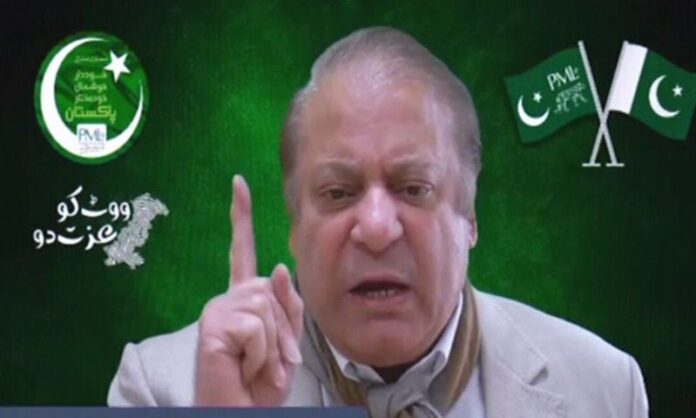 ISLAMABAD: Pakistan Muslim League-Nawaz (PML-N) supreme leader Nawaz Sharif on Thursday criticised the Pakistan Tehreek-e-Insaf (PTI) government over its apparent failure in controlling inflation and poverty, adding that his party was not acting against the prime minister, but that they were working for the people.

Addressing a meeting of PML-N’s Central Working Committee (CWC) via video-link, the former prime minister said he was “pained” to see the existing state of affairs in the country where the poor were unable to afford food and send their children to school.

“Is this what the ‘state of Medina’ looks like?” he questioned, adding that the PTI government had failed to fulfil its “tall promises”.

“You have destroyed Pakistan in every field,” he said while addressing the government, and asked where the 10 million jobs were that it had promised to the people.

“Where are the people who brought you into power? They should answer to the nation as well.”

He reiterated that the opposition’s fight was not against Prime Minister Imran Khan, who supposedly “stole the election”.

“We do not give any importance to him. He is a selected prime minister which you have imposed upon this country […] Those who brought this gift to us should answer … why did they steal the election and mandate of the Pakistani people?” he questioned.

“And no one should try to shut me up. Because I will not,” he said amid applause and cheers from party workers.

The former premier claimed that the Pakistani people were prosperous until 2018 and the PML-N had started development projects in all sectors during its tenure.

“There was adequate electricity again, terrorism ended, the economy was skyrocketing, poverty was ending, the gas too became available, people were getting employment [and] Pakistan was on its way to join the G20,” the former premier said.

However, he commented that at the moment, Pakistan is the most backward country in South Asia and that no other country is ready to stand with it.

He said the PTI government had spent more funds on the Peshawar Bus Rapid Transit (BRT) project than the combined cost of the Lahore, Islamabad and Multan Metro bus projects started by the PML-N.

“Our growth rate was 5.8 per cent and today it is nearing -1.4 per cent,” he remarked, adding that the PML-N government had kept the dollar exchange rate and prices of everyday commodities under control.

Referring to the motorway and Nankana Sahib rape incidents, he said criminals were “roaming freely” today unlike during the PML-N tenure.

Yesterday, the PML-N supremo claimed he has been informed that “someone else” was running the parliament houses, in lieu of its members.

The address to the CEC of the PML-N comes almost two weeks after Nawaz, who has been residing in London since November last year on the pretext of medical treatment, marked his return to the political ring almost after two years through a fiery speech to a gathering of the opposition parties, taking the military establishment head-on.

In his second virtual address in less than two weeks, Nawaz said, “People tell me that someone else is running the parliament. Other people come and give directions about the day’s agenda and voting on bills, etc.”

“However, our spirits will not be dampened by what is happening,” he said, adding that the party would double its efforts. “We are proud that our party workers are facing the current situation with courage. There is no example in the history of the treatment meted out to our children,” he said.

He added that Shehbaz Sharif has shown unparalleled strength and courage during these times and paid tribute to his brother for serving the nation with honesty. “He worked day and night to set up power plants in Punjab.”

The federal government on Tuesday had decided to take steps for the repatriation of former prime minister Nawaz and PM Imran had directed his legal and Federal Investigation Agency (FIA) teams to take steps to immediately contact the British authorities to help produce Sharif in a court of law.

Sharif, who has been residing in London since November last year on the pretext of medical treatment, marked his return to the political ring last month after almost two years through a fiery speech to a gathering of the opposition parties, taking the military establishment head-on.

In a similar speech yesterday, Nawaz claimed he has been informed that “someone else” was running the parliament houses, in lieu of its members.