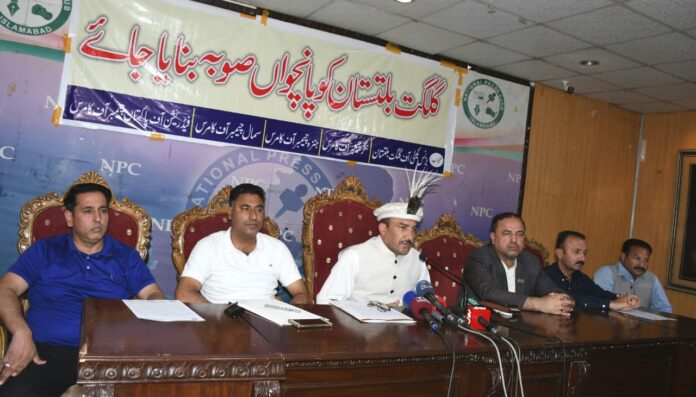 ISLAMABAD: As proposed by the incumbent government, the grant of provincial status to Gilgit-Baltistan, the gateway of China Pakistan Economic Corridor (CPEC), will guarantee success for the multibillion dollar corridor, besides opening new ways of investment in the strategically located northern part of the country.

Addressing the press conference, FPCCI Vice President and GB Excise and Taxation caretaker minister Muhammad Ali Qaid said the grant of constitutional provincial status to GB would facilitate those foreign investors to invest in GB who were reluctant to invest due to the existing disputed status of the area.

“The provisional provincial status for GB will ensure success for the CPEC, as a number of already approved/planned mega projects under CPEC were waiting for foreign investment.”

He said the provisional provincial status would not affect the Kashmir issue, as GB, under the proposed reforms, would be able to participate in the plebiscite of Kashmir, whenever it is held.

Showing a set of resolutions passed by the legislative assembly of GB, he said that the unanimous resolutions of the assembly demanding provincial status are evidence of the demand of people of GB, who are deprived of their due rights for the past 73 years.

“We are thankful to the government, political parties and Pakistan Army for deciding about fulfilling demands of the people of GB. I request the government and opposition parties to grant the new status to GB even before the election, scheduled in the mid of next month,” he added.

He recalled that in 1947, the people of GB liberated the whole region from Dogras and unilaterally joined Pakistan. “You all gained independence and established your independent state there, but we offered selfless love and ideological relationship with Pakistan,” he added, “We are considered Pakistani and now we want to be a part of Pakistan – constitutionally and the time has come that Gilgit-Baltistan will be the fifth province of Pakistan.”

Speaking on the occasion, GB Caretaker Law Minister Muhammad Yaseen said that proposal of provisional provincial status for Pakistan was the outcome of an extensive study and discussion by a high-level committee constituted by previous government under the head of Sartaj Aziz. There was consensus developed among all stakeholders that GB would be made the provisional province pending the resolution of the Kashmir dispute.

“This is the right time to make development regarding GB and delay in the process would benefit those of the country’s enemies,” he added.

“Besides, there is no rationale in the argument that giving constitutional rights to Gilgit-Baltistan would harm the Kashmir cause,” Mr Muhammad Qaid  of Nagar Chamber of Commerce said adding, “We stand with the Kashmiri people for the Kashmir cause and I believe that the people of Kashmir too wants to see that our people are getting their rights.”