Is National Savings the right investment vehicle for you?

The government agency sells federal government bonds directly to individual investors and is a favourite among many savers, but some of its competitors are giving it a run for its money

Besides physical cash, bank accounts, gold, and real estate, the one investment vehicle that most middle class Pakistanis have at least heard of, if not used themselves, is National Savings, the government department that sells a variety of government bonds directly to individual investors through a network of 376 branches spread throughout the country.

All told, Pakistanis have invested Rs3.4 trillion in National Savings. To put that into context, that is the same amount of money as the total deposits in Habib Bank, the largest bank, and Allied Bank, the fifth largest bank, combined.

When you invest in National Savings, your money is backed by the full faith and credit of the Government of Pakistan. Our government may not have an investment grade credit rating globally, but domestically, we know that it has the ability to print the Pakistani rupee, which means there is a guarantee of being paid back if you lend money in Pakistani rupees to the Government of Pakistan. So it is understandable that people like parking their money in National Savings.

But is it the best option? As we will explore in this article, in some circumstances, it makes sense to put your money in certificates issued by National Savings, but for many other people, there are other options that they should consider. We will lay out when National Savings is right for you, which certificates to choose from (there are three main options), and when to put your money somewhere else.

Who should invest in National Savings?

Anyone looking to park their money in a fixed income instrument that yields steady, monthly interest payments should at least consider National Savings as an investment option. That is usually people who are retired, or people who can no longer earn (possibly because of a disability or illness), or else people were dependent on an earning partner who is no longer with them, either because they passed away (widows/widowers), or because of divorce.

What all of these people have in common is that they have a fixed sum of money that is usually a large amount when seen in isolation, but it is all they have, meaning they need to put it in an investment that will safely provide them with an income every month. They have few, if any, other means of earning an income.

For people like that, regardless of how much they have in assets and what economic strata they belong to, National Savings is almost always something that should be at least part of their portfolio. And for some, it may even make sense to put the majority of their money into National Savings. Which certificate? We will explain shortly.

But for people who invest in fixed income instruments as a means of parking their short-term cash reserves and want to get a better yield than the meagre returns offered by savings accounts, we have some news: you are probably better off leaving your money elsewhere under most circumstances (though there may be some cases in which it may make sense to use National Savings).

If we had to distill the rule as to who should invest in National Savings and who should not: in general, people who need their savings to give them a steady current income should consider National Savings, and those who are saving for any other reason should generally avoid it.

What are the alternatives?

As a result, we examine only investment that offer those same risk-free returns, and the category that we have come up with are fixed income mutual funds that invest exclusively in government bonds. Our comparison with National Savings, therefore, is then like-for-like: we are comparing investments with the same risk-free profile.

Across both conventional and Islamic funds, there are a total of 10 fixed income funds that invest only in government bonds, two of which are Islamic and the remaining eight are conventional. In order to provide a long-term analysis, we restricted our comparison pool to the five funds (two Islamic, and three conventional) that have a track record of at least 10 years as of June 30, 2020. All yields for mutual funds were examined net of fees.

The three conventional funds we examined are the MCB Pakistan Sovereign Fund, the HBL Government Securities Fund, and the NIT Government Bond Fund. The two Islamic funds (and the only two Islamic options available to Shariah-conscious investors) are United Bank’s Al Ameen Islamic Sovereign Fund and the Meezan Sovereign Fund. NIT’s fund is the only one not managed by a bank-owned asset management company.

On the National Savings side, we compared primarily the two main income certificates: Behbood Savings Certificates and the Regular Income Certificates (RIC). We excluded the Defence Savings Certificates from our analysis because the DSCs are effectively zero-coupon bonds that are meant to be a savings instrument rather than yielding regular income. We examine what these instruments are appropriate for later in this story.

Here are our findings: there is absolutely no government bond fund (or frankly any fixed income fund of any kind) in Pakistan that compares favourably to the Behbood Savings Certificates. If you want a regular income, Behbood is the champion in terms of yield, despite the fact that it is lower risk than some of the bond funds that invest in higher-risk corporate bonds as well.

Over the 10 years ending June 30, 2020, Behbood Savings Certificates yielded 12.3% per year on average, compared to 10.2% average yield per year for the next best alternative: the MCB Pakistan Sovereign Fund. Coming in third were the Regular Income Certificates, followed by all of the remaining mutual funds. The two Islamic funds, as expected, rank dead last in terms of average yields over the past decade. 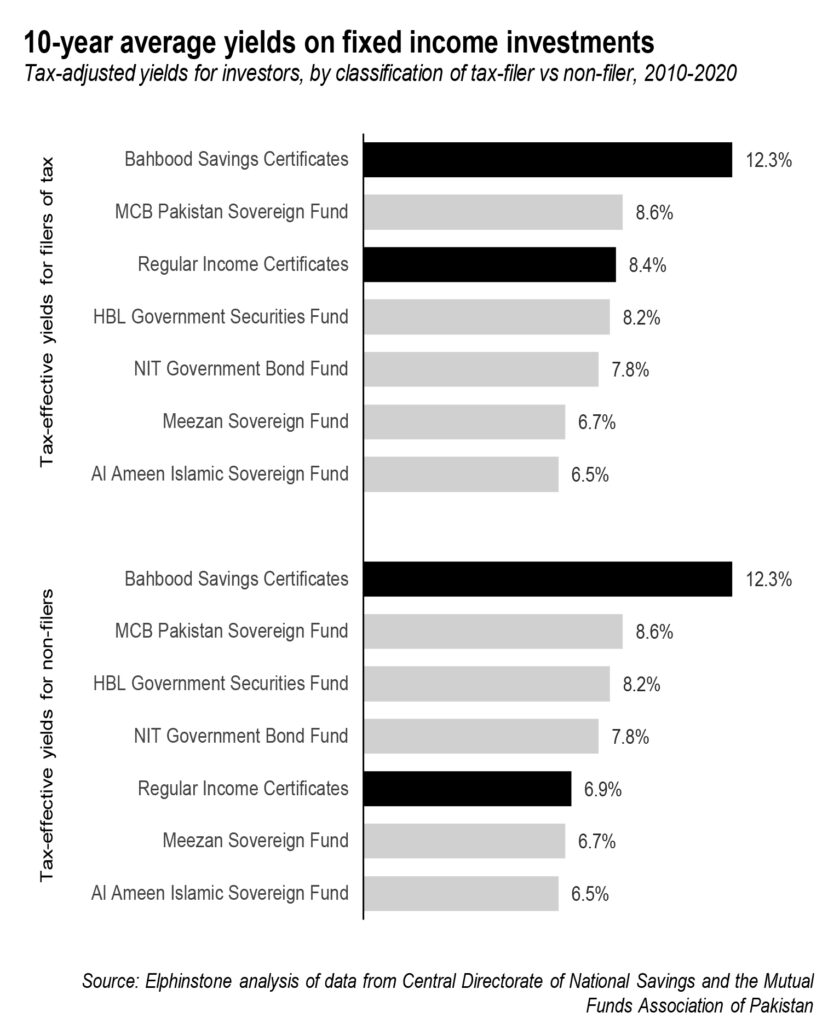 Here is where things get even better for Behbood: it is completely tax free. Every other investment you can make in a fixed income instrument of any kind is taxable, and the tax is usually deducted at source by the financial institution that manages it. But Behbood incurs no tax liability whatsoever.

Behbood was originally launched as an instrument for just widows without an earning partner or disabled persons, though in 2004, that was expanded to senior citizens over the age of 60. That is the limit on who can invest. And even among that population, they can only invest up to Rs5 million for an individual, or Rs10 million for a couple, both of whom have to be eligible investors.

That means that, at an average yield of 12.3% per year, a couple who invests Rs10 million (1 crore) in Behbood can get a maximum of Rs102,500 per month on average from Behbood. That is effectively a middle-to-lower-middle class income in most cities in Pakistan, though it could be a comfortable income in some smaller cities or rural areas.

Behbood, in other words, is a product that the government designed to deliberately provide higher-than-market-average returns to people who need them the most: the needy, or the elderly who do not have much else by way of income sources. It serves its purpose to do just that, and is explicitly designed to exclude anyone else. Everyone else must get the market rates.

The effect of filing your tax returns

Aside from that group of people, and even for people eligible for Behbood who have more in savings than the legal limit for Behbood, you need other options. And that is where the comparison between the Regular Income Certificates and the mutual funds comes in. And which one is best for your needs depends on whether or not you file your tax returns.

The tax rates are lower for people who can demonstrate that their income from fixed income investments in a given year was less than Rs500,000. In that case, for non-filers, the tax rate goes down to 20%, and for tax filers, it goes down to just 10% of interest income.

Taking into account those tax rates, the tax-effective yield on the RIC goes down to 6.9% per year on average over the past decade, compared to the MCB Pakistan Sovereign Fund, which sees its tax-effective yield – impacted by just a 15% tax – go down to an average of 8.6% per year. One Rs1 crore of investment, the RIC will yield Rs57,500 per month, while the MCB fund would yield Rs71,667 per month.

If you file your tax returns, however, the difference between the two fund narrows: the tax-effective average yield stays at 8.6% still for the MCB fund, but goes up to 8.4% for the RIC. Crucially, unlike in the case for non-filers, among non-filers, the MCB fund is the only fund that outperforms the RIC. The HBL and NIT funds both underperform the RIC.

In short, you are probably better off investing in the MCB fund than you are in the RIC if you want an income over and above the amounts allowed by Behbood.

Why mutual funds outperform, and why exclude DSCs

Two quick technical notes before we go: how do mutual funds, which have management fees that National Savings does not, outperform the RIC? Simple: the RIC is a variable rate bond, whereas the mutual fund companies invest in fixed-rate Pakistan Investment Bonds (PIBs), which can vary in price based on movements in interest rates.

Skilled fund managers can see those interest rate movements coming and can trade in and out of various PIBs to take advantage not just of the cash yield of those bonds, but also of price movements resulting in capital gains. As a result, well-managed mutual funds investing in government bonds can outperform direct investments into government bonds, even after paying the management fees of the mutual funds.

And why exclude DSCs, which outperform all of the mutual funds? Because the DSC is not an income instrument. It is a zero-coupon bond, which means it yields nothing in the period that you hold it and pays out the entirety of its profits when you encash it. That does not make it a comparable investment to the others, which all have a monthly income payment option.

A zero-coupon bond is good for a relatively limited set of circumstances, but that is the subject of another story for another day.

(Disclosure: The author is a founder of Elphinstone, a fintech startup that is working to create a free tool called SmartRupee that will allow users to set up automatic deposits into curated, diversified investment portfolios, based on their financial goals.)

Interested in learning more about fixed income investments? Have another question about personal finance? E-mail your questions to [email protected] Your identifying information will be kept completely confidential.