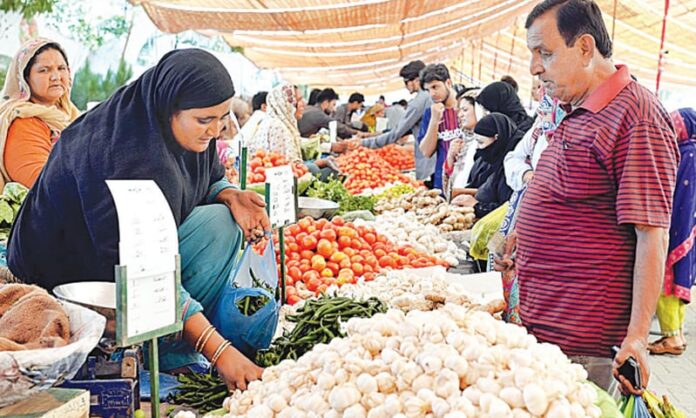 PESHAWAR: The prices of essential commodities including sugar, rice, ghee and pulses in Khyber Pakhtunkhwa (KP) have risen by 10 to 30 per cent over the past week, while many commodities in utility stores have gone missing after sudden hike in prices.

At present, the rate of sugar in the province stood at Rs105 per kg, whereas despite the provincial government’s increase in wheat quota for flour mills, price of a 20kg flour bag has exceeded Rs1,350.

After a rise in food prices in the general market, people of Peshawar flocked to utility stores only to find out that ghee, cooking oil, dry milk, soap, red pepper, salt, spices, beverages, toothpaste, and even shoe polish were being sold at rates similar to the rest of the city.

Meanwhile, citizens complained that there is no effective mechanism on behalf of the district administration to keep a check markets and provide relief to the masses against the artificial increase of grocery prices.

KP Flour Mills Association Chairman Naeem Butt told Profit that the province requires 12,000 tonnes of flour or wheat on a daily basis, however, the provincial government has fixed a quota of 7,000 tonnes per day, while the remaining 5,000 tonnes is being supplied from Punjab.

Butt added that provincial flour mills have been issued a list of selected dealers from the deputy commissioner’s office according to which all mills are to supply them with flour and wheat as per the subsidised price list.

“Nobody can increase wheat or flour prices arbitrarily. There is no increase in the prices of local flour at the provincial level; however, the prices of fine flour, which is being supplied from Punjab, has increased in the local market,” he explained.

Speaking to Profit, Adviser to Chief Minister on Information, Kamran Bangash, said that the provincial government has issued strict instructions to district administrations to take effective action against hoarding.

He said that demand for wheat in KP is high while its production low, which is why the province is dependent on Punjab. “Our demand is 4.3 million tonnes per annum. To meet this demand, the provincial government has assured that 1.2 million tonnes of wheat is procured from the Pakistan Agricultural Storage and Services Corporation (Passco), while the commodity would be imported as well,” he added.

- Advertisement -
Facebook
Twitter
Linkedin
WhatsApp
Email
Previous article57 killed in deadliest Israeli strikes on Syria in years: monitor
Next article‘We will not accept the supremacy of institutions in the country,’ says Fazl