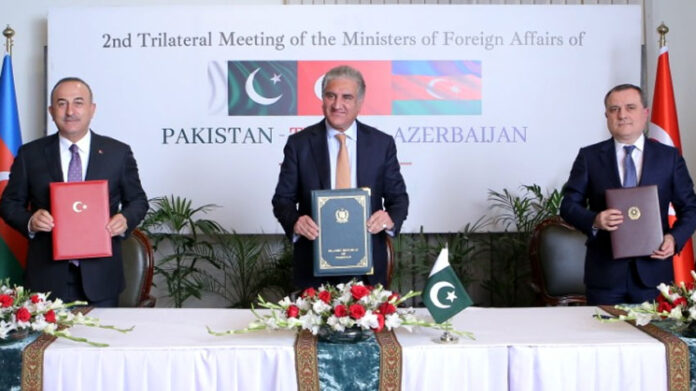 ISLAMABAD: Pakistan, Turkey and Azerbaijan, in the second trilateral meeting between the countries on Wednesday, expressed determination to continue cooperation to promote peace, stability, and development in the region.

Addressing at a joint press conference of the foreign ministers of the three countries after concluding the second trilateral meeting of the forum in Islamabad, Shah Mahmood Qureshi said that Pakistan enjoys cordial and brotherly relations with Turkey and Azerbaijan.

He said that a host of topics, including trade, investment, security, connectivity, and strategic cooperation, came under discussion during the meeting. The FM added that the trilateral meeting also discussed global and regional security environment, crimes against Muslim minority in various countries, the challenges of growing Islamophobia and Covid-19 pandemic.

“We want to enhance [our] linkages through parliamentary exchanges, enhanced media interaction and collaboration between our think tanks, artists and tourists,” Qureshi said.

Qureshi told media persons that the foreign ministers exchanged views on enhancing cooperation in the field of energy, environment and people to people contacts. He added that a special emphasis was placed on increasing parliamentary and media exchanges among the three countries for better understanding and harmony.

On the occasion, Qureshi thanked his Turkish and Azerbaijan counterparts for their support on the Kashmir dispute. He explained that, during the meeting, the gross human rights violations in the Indian Occupied Kashmir (IOK), the prolonged military siege in occupied Kashmir and India’s unilateral actions to change demography of the area were also discussed.

Talking about Nagorno-Karabakh issue, the foreign minister called for resolution of this dispute peacefully. He said that Pakistan believes that all regional and global issues should be resolved through peaceful means and in light of the relevant international laws.

Turkish Foreign Minister Mevlut Cavusoglu said that Pakistan has unique space in the hearts of the people of Turkey. He maintained that both countries support each other through difficult times.

The Turkish FM told the media that the current trade volume between the two countries is $800 million, stating that this is far below than the real potential of the two countries. This volume needs to be enhanced, he said.

He further said that over 100 Turkish companies are currently working in Pakistan in diverse fields. We are encouraging more companies to come and invest in Pakistan, he added. He informed the media that both countries are cooperating in the sector of defence production.

Cavusoglu extended his country’s full support to the people of IOK and called for resolution of the Kashmir dispute in accordance with the relevant United Nation Security Council (UNSC) resolutions.

“We express our full support with Kashmiri brothers in the face of worsening human rights situation and demographic change especially during the last two years,” the Turkish foreign minister said.

He also thanked Pakistan and Turkey for extending their full support during the second war for the liberation of Nagorno-Karabakh.

“They raised their voices in the international arena to restore justice and we highly appreciate this principled position by Turkey and Pakistan,” he said.

Islamabad Declaration was signed on the conclusion of the second round of trilateral meeting of the foreign ministers of the three countries.