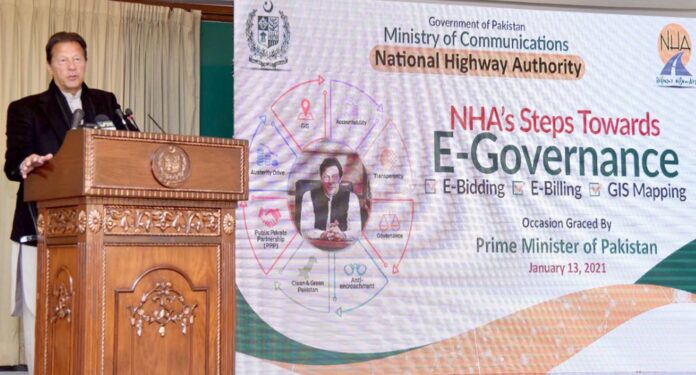 ISLAMABAD: Prime Minister Imran Khan said on Wednesday that the e-bidding and e-billing system will take the country towards modernity and digitalisation.

He was addressing the inaugural ceremony of the E-bidding, E-billing and GIS Mapping System of the National Highway Authority (NHA), which aims to ensure transparency in the process of award of contracts.

“E-bidding will reduce human interaction in awarding contracts of various projects and will eliminate corruption and bribery from the country,” he said. “We can never make progress if bribery and corruption continue in the country.”

The prime minister expressed resolve to digitise the Federal Board of Revenue (FBR) by July this year. “We can ensure more tax collection by introducing automation and digitization in the FBR,” he added.

The premier said that other ministries will also be encouraged to move towards e-governance so that utmost transparency can be ensured.

Talking about the Broadsheet controversy, the PM said the whole system of the country becomes corrupt when the ruler himself is involved in corrupt practices.

Earlier, Communications and Postal Services Minister Murad Saeed said that the NHA has started an e-bidding system that will make the bidding process transparent, efficient and easy. “NHA is endeavoring to undertake road building projects on public-private partnership (PPP) basis,” he added.

Separately, Prime Minister Imran Khan on Wednesday directed the authorities concerned to take all possible measures to bring down the prices of essential items across the country.

Presiding over a meeting of the Pakistan Tehreek-e-Insaf (PTI) spokespersons, Imran Khan directed to take immediate steps to import sugar, adding that the government has taken some important decisions with regard to sugar and power.

Industries and Production Minister Hammad Azhar, Science and Technology Minister Fawad Chaudhry and Human Rights Minister Shireen Mazari had briefed the meeting on the above.