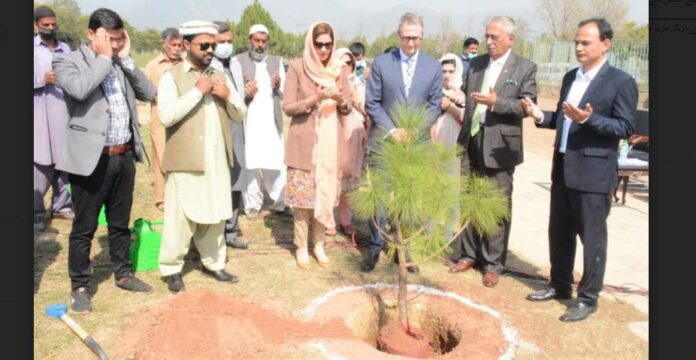 The Australian High Commission has gifted a Miyawaki forest to Islamabad’s Fatima Jinnah Park as part of an initiative organised by the Capital Development Authority (CDA) to support Pakistan’s Miyawaki forest and the Spring Tree Plantation Campaign 2021.

Speaking at the tree plantation ceremony, Dr Geoffrey Shaw said, “This Miyawaki forest is a gift from the Australian government to the people of Pakistan. I hope that the trees and shrubs planted here today help regenerate not just the environment of Islamabad but contribute to making Pakistan cleaner and greener.”

“Green initiatives such as this are becoming ever more important in the face of the growing impacts of climate change affecting our region – something both Australia and Pakistan are keenly aware of and taking action on,” Dr Shaw said.

In his address, CDA Director General Naveed Tareen said that Miyawaki is one of the techniques to develop forests quickly and Prime Minister Imran Khan has taken keen interest in its implementation. “We all are aware of the threat of global warming and how it’s already affecting our lives. Right and timely initiatives like this are much needed,” he added.

Australia is committed to combating climate change and is on track to beat our 2030 emissions reduction target under the Paris Agreement, having achieved 17 per cent reduction in emissions since 2005, the statement read.