PM says no trade with India until IOK’s autonomy restored

ECC had allowed private sector to import sugar, cotton from India on March 31 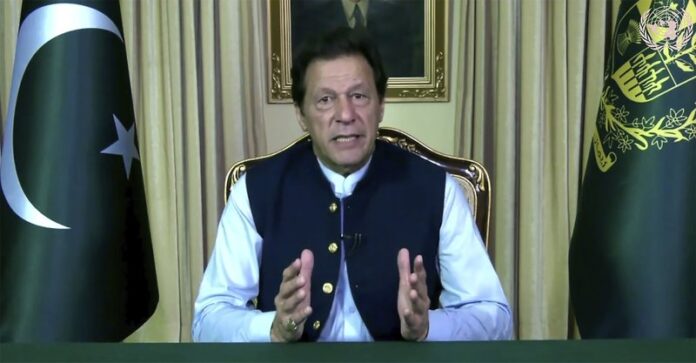 ISLAMABAD: The federal government Friday decided not to open trade channels with India until the pre-August 5, 2019 status of Indian Occupied Kashmir (IOK) is restored.

Chairing a special meeting on economic diplomacy, Prime Minister Imran Khan said that relations with India could not be normalised without giving the Kashmiri people the due right of self-determination.

“We will not trade with India till India restores the pre-August 5, 2019 status of Indian Illegally Occupied Jammu and Kashmir. Our principled position is that there will be no trade with India without resolving the Kashmir issue,” said the prime minister.

“We will not move forward unless India reconsiders its wrongdoings. The decisions of the Economic Coordination Committee [ECC] are submitted to the cabinet for ratification and final approval. This should have not been shared with media prematurely,” the source quoted the prime minister as saying.

The meeting was given briefings by Minister for Foreign Affairs Shah Mahmood Qureshi, Minister for Finance Hammad Azhar and other officials on the merits and demerits of opening trade channels with India.

The meeting discussed economic policy and resumption of relations with other countries, including India. The meeting also discussed ambiguity over the approval of a summary on cotton and sugar imports from India.

Sources said that the prime minister was unhappy over the way the decisions of the ECC were shared with media without approval by the apex body, including the Foreign Ministry and Ministry of Information and Broadcasting.

According to the source, the prevailing rules of the government, various proposals are considered in the ECC. However, the way the ECC’s proposals were shared with media without the approval of the federal cabinet was inappropriate, the source added. The source also said that alternative sources of imports should be explored immediately to facilitate various sectors especially imports of sugar and cotton yarn.

On the occasion, Finance Minister Hammad said that the final decision of any policy is taken by the cabinet but when a policy is formulated, it is decided by the ECC.

The federal minister further said that there are alternative options for sugar and cotton imports. Prime Minister Imran was informed only about the economic aspect but there was no detailed discussion with the PM regarding trade.