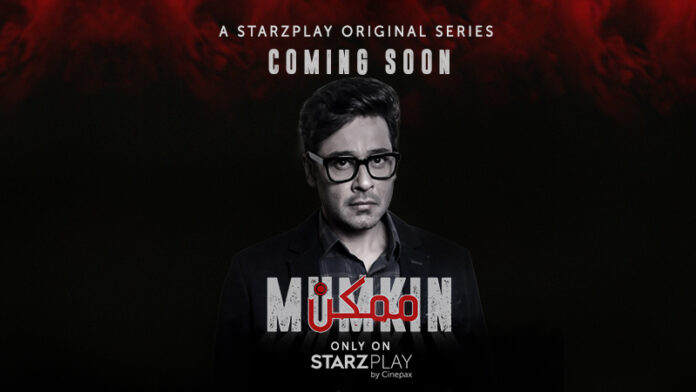 Launched in 2018, STARZPLAY by Cinepax has gained recognition as the fastest-growing streaming service in Pakistan. The service offers Convenient payment methods (Telenor, Ufone, Credit card, Vouchers) and streaming in 4K and Full HD on multiple devices.

STARZPLAY is incredibly excited to announce that its new original web series, Mumkin, is launching soon. Starring Faysal Quraishi , Saleem Meraj, Irsa Ghazal, Sunil Shankar, and other notable actors, Mumkin is set to be a show for the ages, showing how far someone can go for those he loves. The story focuses on a man going up against powerful enemies in search for revenge.

With the star of hit drama series such as ‘Dil e Momin’ and ‘Bashar Momin’ leading the way along with an incredibly talented cast, Mumkin definitely promises to reach great heights as a Pakistani web series. Arif BaigMohamed, Chairman Cinepax Cinemas, added, “With the launch of our exciting new crime show Mumkin, we have stayed true to our commitment to produce top notch local web series and promote local talent.”

The Director of ‘Mumkin’, Shahid Shafaat shared his views on the new series, “It is my first experience working with an OTT platform and it has been a great one. In our experience in working with STARZPLAY, we have had the delightful opportunity to work on a subject considered taboo for television. The advantage of working with an OTT platform like STARZPLAY is that we can explore unconventional topics which are usually not available for our audiences. Mumkin will be one of the many web-series to come.”

STARZPLAY has been creating original web series since its inception. Here is a quick recap of what the streaming platform has done so far.

Karachi Division: This crime drama series was the first of its kind venture for STARZPLAY and it quickly rose to become the top most-watched web series on the platform. Directed by Pakistani film veteran Shamoon Abbasi, Karachi Division describes the story of two rival gang leaders at war for domination over Karachi.

Kaash Keh: ‘Kaash Keh’ is a collection of short dramas with a common theme mainly addressing taboo topics in Pakistan.

Khel Tamasha: Directed by Jawad Bashir, the series follows the on-set misadventures of a film cast and crew as they try to wrap up the production of their film. The hilarious plot and amazing acting by the stars was thoroughly appreciated by the audience.