Yes, the banks messed up but are they entirely at fault? Did forward guidance misguidance play a significant role? 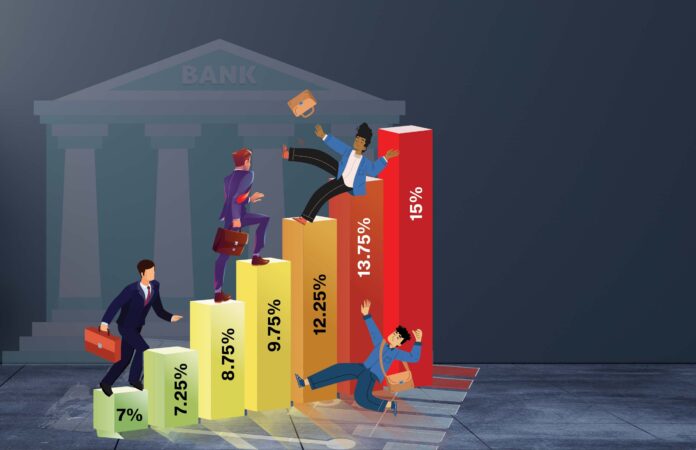 All through last year, the State Bank of Pakistan (SBP) was involved issued what they called “forward guidance” on interest rates. It is, to be fair to the SBP, a pretty standard practice among central banks around the world. Forward guidance was their outlook on where inflation, and interest rates, were likely to go in the future.

The practice has been around in different shapes and forms since the 1990s, but was introduced as “forward guidance” by the Bank of England in 2013. Essentially, the concept is that if the central bank announces its outlook of the economy and what monetary policy course it will likely be taking, it gives households, businesses, and investors early insight into what the interest rates are going to look like, allowing them to take precautionary or proactive measures.

In the SBP’s case, however, taking the nation into confidence over its outlook of the economy has backfired at times. Largely because, as experts and market participants have complained time and again, the SBP’s guidance has been ambiguous and ineffectively communicated.

Essentially, the markets just didn’t believe in the way they should. This issue aggravated further when the SBP played just a little fast and loose with the purpose of forward guidance and tried to use it to calm the markets by assuring them that the policy rate would continue to be accommodating. As a result, banks felt that investing in PIBs and MTBs was the right choice. Some are locked in longer tenors. Some of those banks, however, are suffering more than others.

For instance, BOP, HBL, MCB, UBL, BAFL, ABL, NBP, and SBL increased their reliance on PIBs compared to MTBs if we look at it in terms of the proportion of investments. Some banks chose to rely on PIBs more than others such as BOP, MCB, and BAFL. You can see this in the “Investment in instruments as a proportion of total investment” table. 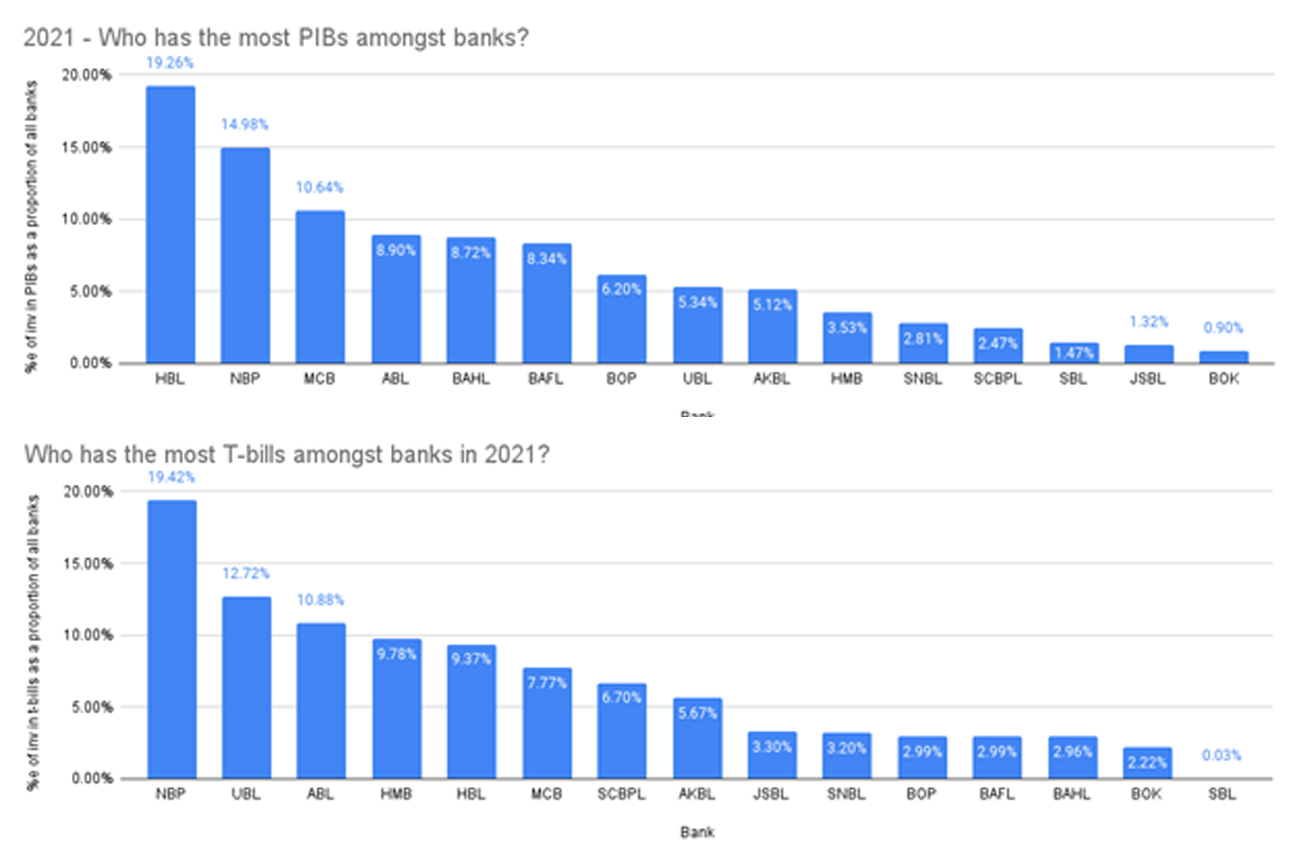 In its Financial Stability Review, the SBP noted that the market showed high interest in government securities. The SBP reported that Banks’ investments grew by 22.0 percent. This was noticeably lower than the recorded growth of 33.5 percent last year.

While the pace of investment slowed down, the share of investments in banks’ assets grew to 48.4 percent by the end of Dec-21 from 47.5 percent a year earlier. What is important is that more than 90 percent of the total investments were made in Federal Government Securities during CY21.

Investments rose in PIBs while the stock of MTB remained muted in CY21 which goes in line with the government’s goal to increase the debt maturity profile. In the previous 5 years, a notable rise in MTB investments was last observed in CY17 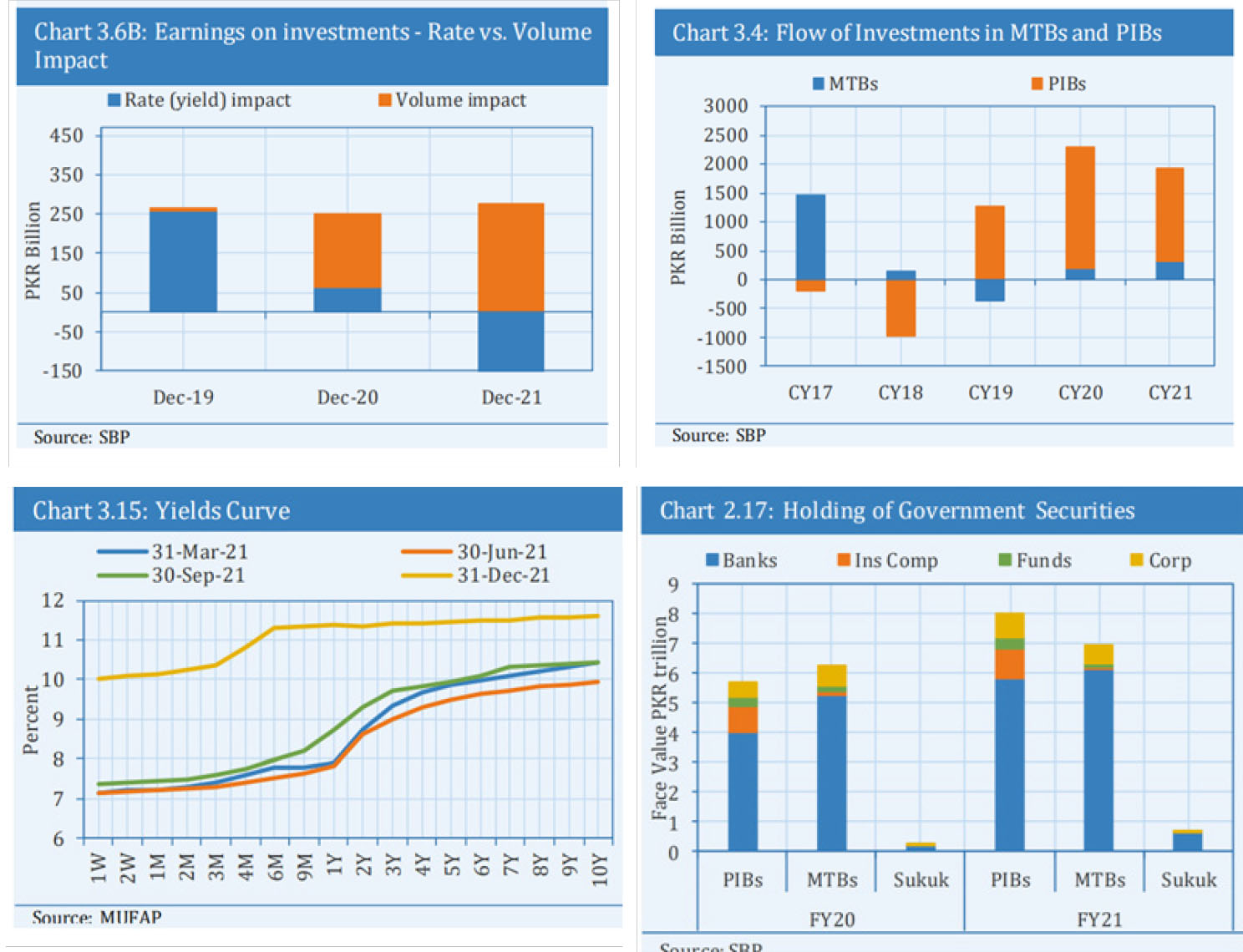 The SBP adds that combined offers in all tenors of fixed rate PIBs were almost 4 times, with an offer to target ratio of 3.9, in auctions of Q2CY21.

The market’s interest in fixed-rate PIBs remained intact after the rise in the SBP policy rate in Q3 and Q4 of CY21. In response to the hike, banks offered higher bidding rates as they built in the expectation of further policy rate hikes. As a result, the government picked up fewer PIBs than its target in H2CY21. This is roughly the same time you probably heard Shaukat Tarin boil down on banks and threaten Koonda.

However, after an increase in the policy rate and a change in forward guidance, the market showed increased interest in quarterly coupon floating rate PIBs in Q3CY21 and Q4CY21. As per the SBP, the offer to target ratios were 3.45 and 2.45 respectively. Keeping the high rates in mind, the government also accepted higher than target amounts of floating rate PIBs in H2CY21. This is seen as a strategy to lengthen the maturity of the government’s borrowing profile.

Banks, however, chose to strengthen their position by moving away from their favorite 3-year quarterly-coupon floating rate bond in Q3CY21, and moving into 2- a year floating rate bond in Q4CY21. This is because the rate of return on this 2-year bond is reset on a fortnightly basis and paid quarterly. This brings down the duration risk of changes in interest rates.

A rate-and-volume variance analysis reveals that lower interest rates adversely influenced interest earnings on investments while the rise in earnings was solely driven by volume.

As a result of this “forward misguidance”, some banks are having trouble meeting their Capital Adequacy Ratio (CAR) and loss-making bonds are eating into their equity.

Banks bought fixed-rate bonds when the policy rate was lower. However, following a rise in the policy rate, the return of the bond seems meager. This becomes important when you keep the inflation rate in mind and the negative real interest rate available.

Currently, not only have the bonds fallen in value, but the difference between the bond’s yield and the rate at which it is being financed, the carry, is also negative. Banks want these loss-making bonds reclassified to Held to Maturity (HTM) at cost. Right now they belong to the Available for Sale (AFS) portfolio.

Every time the AFS trades at a discount to the book value, banks lose out on Tier 2 Capital. This is important because Tier 2 capital ratio helps determine how much risk-taking activity the bank can undertake, such as giving out loans or fresh investments in securities.

Without reclassification, banks will have their hands tied concerning lending and investments. The reclassification will make it easier for them to meet their CAR and also help keep tier 2 capital ratio up, say treasurers at banks.

We’ve covered this in detail previously. 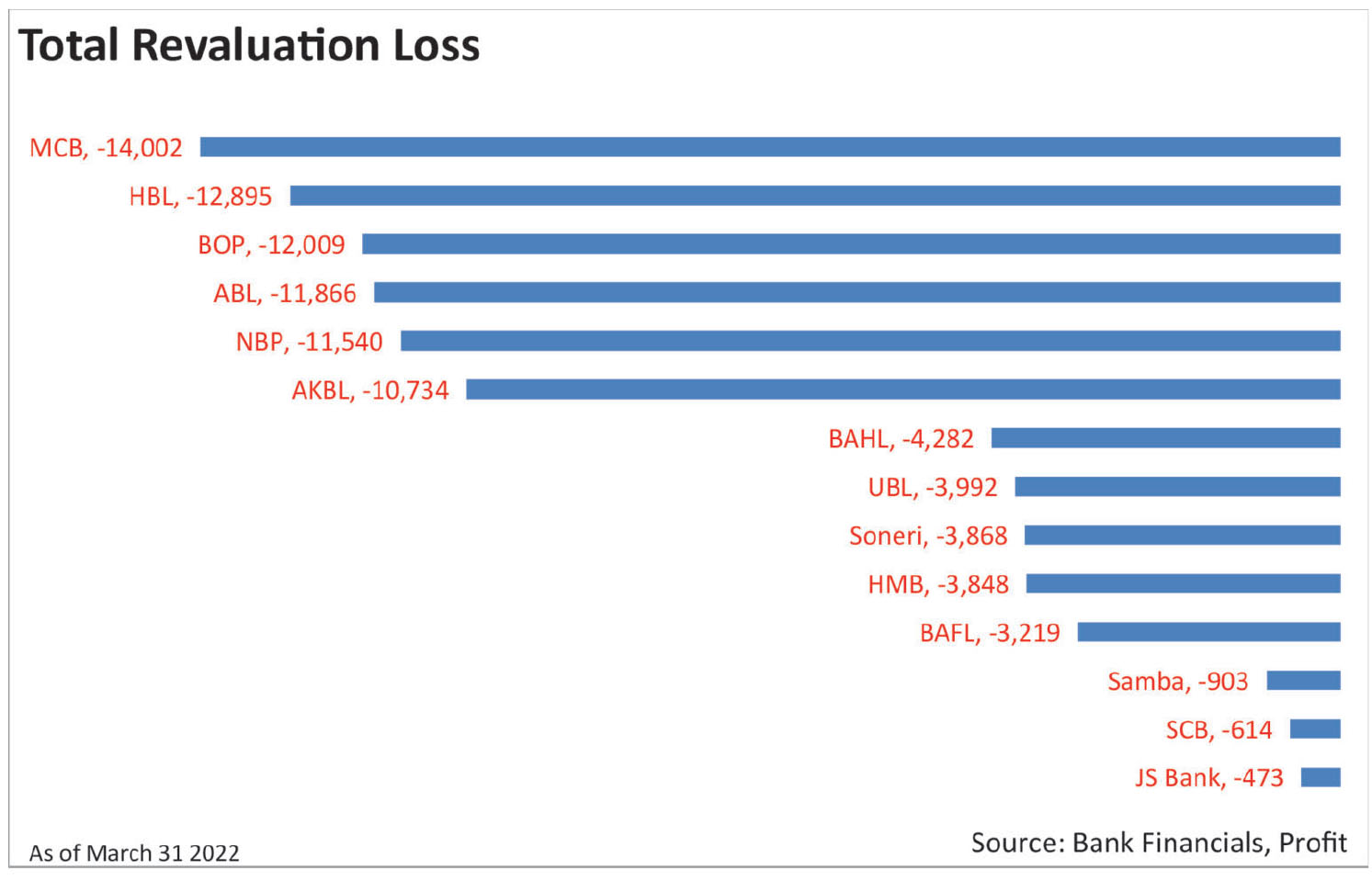 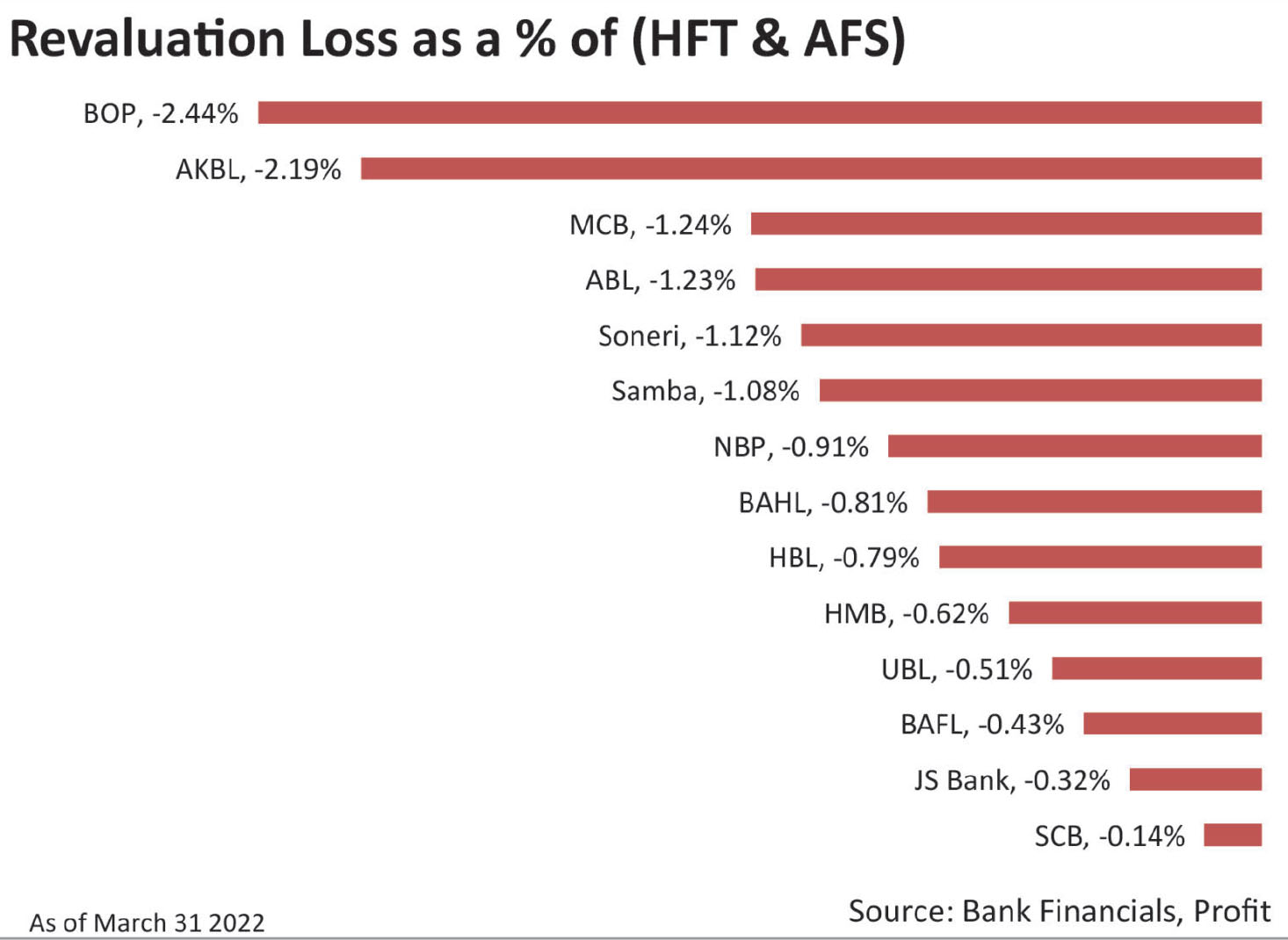 Is the SBP really the hero?

Believe it or not, several treasurers have confirmed that the SBP’s forward guidance resulted in them going heavy into PIBs and in longer tenors at the beginning of CY21. Treasurers claim that sometimes the decisions to go long in PIBs were influenced by the SBP urging them to do so. “The pressure to into PIBs was considerable, especially given the repeated forward guidance being issued by the State Bank and their forecast that inflation will remain in the 7-9 percent range over the medium term” one executive from the treasury of a big bank tells Profit.

Essentially, following the ballooning revaluation needs of banks, the SBP is allowing a one-time reclassification of the loss-making bonds to the HTM portfolio. Profit has not received any confirmation from the SBP about this. However, sources explain that permission for revaluation will be granted on a case-to-case basis. Because it is not for the entire banking sector, there is no need for a circular to be issued.

You would assume that the SBP is a hero because it is letting banks reclassify their losses, essentially a loss-making endeavor on their part. You might also be thinking that profits and losses are part of the game and the SBP is being extra kind to the banks by allowing this reclassification. However, treasurers claim that the SBP’s forward guidance and push on intense push on treasurers resulted in these decisions being made.

How was the SBP so chill?

If we look at the available data, released by the SBP itself, it seems like the SBP did not expect rates to rise the way they did.

As per the SBP Financial Stability Review, “The banks remain largely immune to interest rate risk due to both adequate capital cushions and contained exposures to interest rate risk (in terms of relatively short repricing duration and maturity) of these securities, which mainly comprise short-term MTBs and floating rate PIBs and have deep and active secondary markets.”

In December the SBP claimed, “On an aggregate basis, due to strong capital cushions, the banking sector has adequate capabilities to withstand any severe shocks to interest rates.”

In the Financial Stability Review, the SBP talks about a sensitivity analysis which shows that even though the banking sector faces a decline in its aggregate CAR (from 16.7 percent at the end of Dec-21 to 15.2 percent) under a severe but hypothetical shock to interest rates i.e. 300 bps increase in the yield curve (up to 10-year maturities), most of the banks continue to meet the minimum CAR requirement. 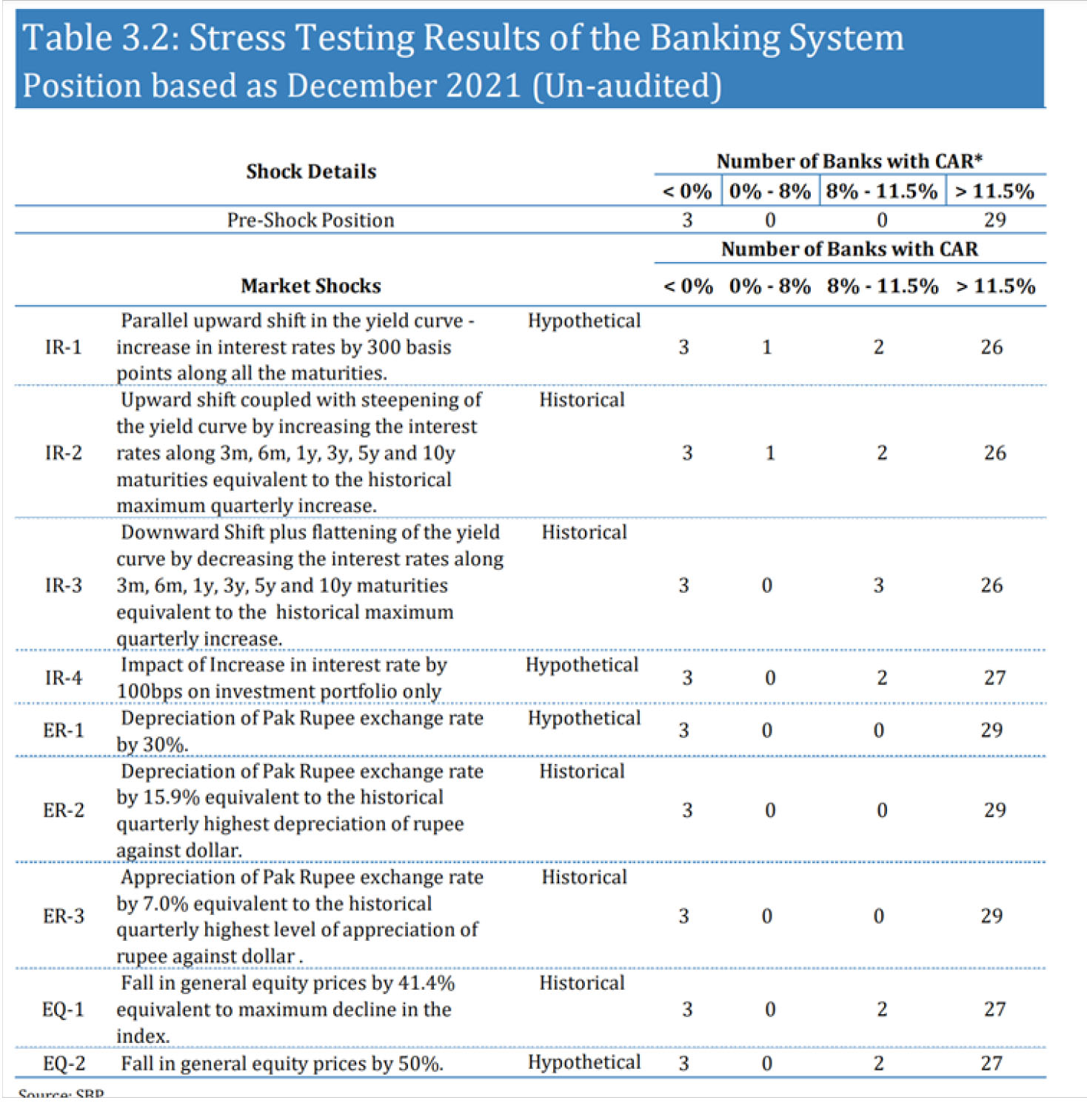 It is important to note that the policy rate has increased by 525 basis points since December 2021 which has also moved the yield curve upwards. Moreover, back in December 2021, the country had a negative real interest rate.

“There is a reason it’s called a stress test.  Considering the volatility in our interest rate cycles, a 300 bps nudge is a walk in a park, not a stress test,” says Ammar Habib Khan, Economist. Khan adds, “300 bps is what was needed to go back to baseline considering the negative real rates, this isn’t a stress test appropriate for that time period.”

The hypothetical analysis shows just how vulnerable some banks are as a result.

All you need is to sacrifice dividend

One such bank executive availing of the reclassifying facility confirmed to Profit “We would certainly avail it as this would provide us necessary leeway in our balance sheet and ratios to continue to grow and also protect us against any further unprecedented/ unusual shocks, if any, from the market.  There’s no downside of using/ availing this confession for sure”.

He added that the SBP would caution the banks to a dividend limitation. However, that too is not set in stone. “That’s the only constraint but for that SBP requires prior approval from them. If the ratios are good then the SBP will not stop from paying dividends.”

The source however clarifies that the approval for the dividend is not explicitly mentioned but that’s generally the case.  “The dividend can be paid other than the leeway that this concession will create in the retained earnings of the bank,” says the source.

This however proves to be a lesson for the banks to not take the SBP’s words at face value. Conducting risk analysis, being realistic about the macroeconomic environment, and doing your research are important in making the right banking decisions. After all, if banks can’t manage to do well while investing in the safest form of investments, then that leaves a lot to the imagination.