Banks need the SBPs help to cut their losses

Banks want the SBP to come in as a superhero and save them. Some banks need the SBP more than others 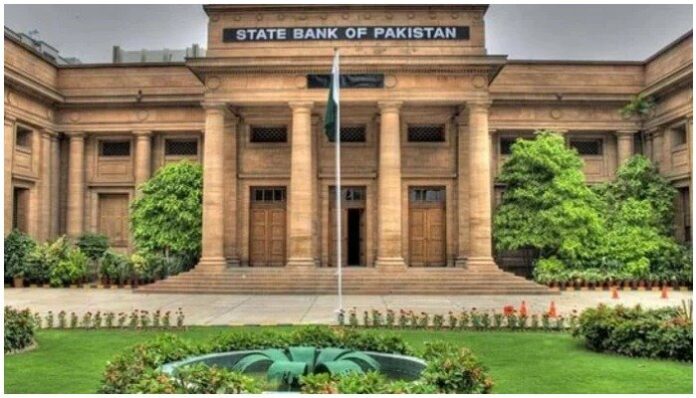 There’s been a lot of to and fro happening between banks and the State Bank of Pakistan (SBP) over reclassification of loss-making bonds. Loss-making bonds are those whose present value in the secondary market is lower than the book value on the banks’ balance sheet.

The question is, why do banks want to do this? Well, some banks are having trouble meeting their Capital Adequacy Ratio (CAR) and loss-making bonds are eating into their equity.

Sources claim that the lobbying for this is done through the umbrella of the Pakistan Banks Association (PBA). The PBA is said to have asked the SBP to allow a one-time reclassification at the original cost of the bonds in order to help banks out with meeting their CAR.

“The reason banks have gone to SBP through the PBA is that their CAR is either short or will be by the time they publish June financials. Based on their financials, some banks need this more than others such as Bank of Punjab, JS Bank, and Askari Bank,” a high-ranking source in the banking industry told Profit.

While it was expected that the SBP and banks would come to an agreement regarding this by the end of FY 2021-22, it is still in the works. Informed sources say that once implemented, it will be applicable retrospectively from June 30, 2022.

How are banks making a loss on a sovereign-backed asset?

Currently, not only have the bonds fallen in value, but the difference between the bond’s yield and the rate at which it is being financed, the carry, is also negative.

Banks want these loss-making bonds reclassified to Held to Maturity (HTM) at cost. Right now they belong to the Available for Sale (AFS) portfolio. AFS portfolio instruments are revalued daily at a benchmark published by the Financial Markets Association of Pakistan called PKRV. It is named after the Refinitiv Eikon page on which this benchmark has been published since the practice began.

Banks do not revalue HTM securities. They are not incurring any losses in this category for now. This is why banks want to move AFS at the cost at which they acquired the asset to HTM

What does this mean for the books?

Every time the AFS trades at a discount to the book value, banks lose out on Tier 2 Capital. This is important because Tier 2 capital ratio helps determine how much risk-taking activity the bank can undertake, such as giving out loans or fresh investments in securities. Without the reclassification, banks will have their hands tied with regards to lending and investments. The reclassification will make it easier for them to meet their CAR and also help keep tier 2 capital ratio up, say treasurers at banks.

CAR is calculated by dividing the Eligible Regulatory Capital by the total Risk Weighted Assets (RWA) as the denominator. This indicates the robustness of the bank’s overall capitalisation and balance sheet strength.

Currently, banks/Development Finance Institutions (DFI) are required to maintain a minimum CAR of 10% on an ongoing basis on both a standalone and consolidated basis.

What options do banks have?

Banks have the option to sell bonds at a loss to book value. That, however, materialises the loss and banks will have to realise it. Logically, banks are averse to this idea as it impacts their earnings. This will bring down their profits and their capital.

However, if banks do not sell the bonds, the loss is temporary as the value of the security approaches maturity. Banks might be able to reverse their losses eventually as they near maturity if they don’t reclassify. This can happen if interest rates start falling once again. Banks will have to decide this based on the tenor of bonds they have invested in.

Reclassification is another option banks might have. If the talks go well with the SBP, this won’t be the first time banks have been allowed reclassification. The SBP allowed the reclassification of securities from AFS to HTM when Basel II was adopted in 2006. Then, the SBP instructed banks that they could not use the HTM securities to obtain repo financing and had to fund them from their own capital deposits. Repo financing is basically an OMO.

It is important to note that the reclassification allowed at that time was because of a change in banking norms through the adoption of Basel II. This time around banks are asking for help to reclassify bonds because they made a bad business decision. This implies there will be implications.

As per informed sources, it is likely that the SBP may restrict banks from paying dividends to their shareholders for a specific number of years in case a bank chooses to reclassify.

This restriction on dividends is however to preserve capital, as preserving capital through reclassification and draining through dividends would be counterproductive. In other words, if you’re complaining about loss-making bonds eating through your capital, you shouldn’t be out there paying dividends, which is eating into your retained earnings. Moreover, there are bound to be repercussions to bad business decisions.

This cap on dividends may impact the performance of these stocks on the Pakistan Stock Exchange (PSX). Investors usually hold onto banking stocks for the very purpose of receiving dividends.

Not all losses are the same. Which banks will be hit the most?

The current revaluation losses cannot be estimated with accuracy as we do not have access to the bank’s current portfolio. Visibility on that will be possible when banks publish their final accounts. 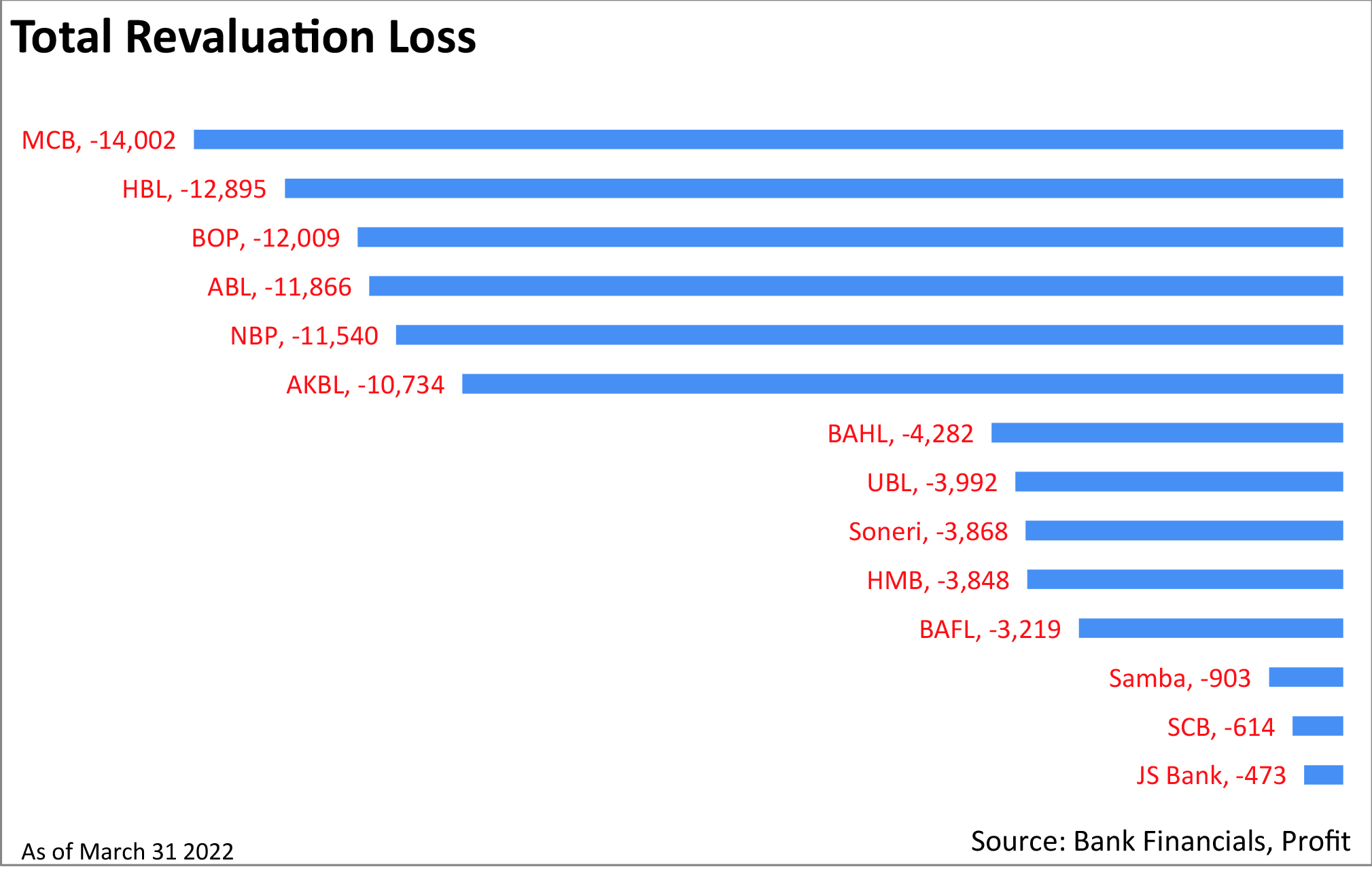 Another way to look at this is by ranking the deficit as a proportion of the investment portfolio at banks. The investment portfolio is basically the sum of the HFT and AFS. The biggest impact is on BOP, followed by AKBL, MCB, ABL, and Soneri. Standard Chartered Bank is the least impacted based on this metric. 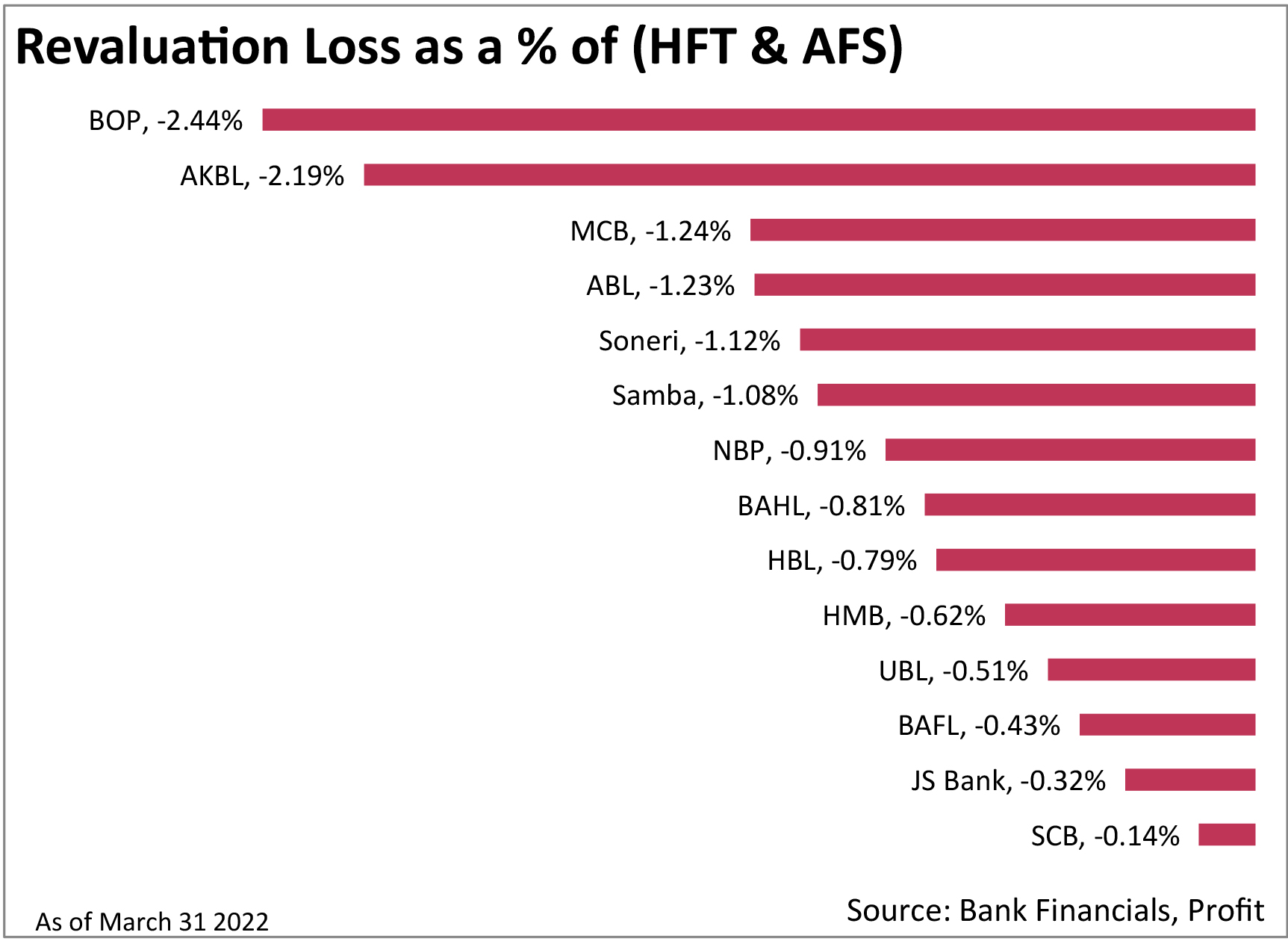 However, it is important to note that while larger banks like MCB and HBL are incurring larger losses, they also have significant equity. What this means is, that while the losses are bleeding out, it is unlikely that the CAR or the Leverage Ratio (LR) for these banks will be impacted significantly or materially.

Smaller banks such as BOP and AKBL, having losses equivalent to the larger banks are having a tough time considering their CAR and LR are hovering near the threshold.

What does this mean for the banking sector?

This shows the banking sector in an unflattering light. The numbers show that nearly all banks are bad at risk management. The only difference is that some can afford to be bad at it; while others cannot.

The decision to allow banks to reclassify loss-making bonds, however, is seen critically by analysts and sources in the banking sector.

“The SBP is allowing banks to make losses on bonds and then letting banks brush their losses under the carpet. As a result, banks will never fully learn to fix their risk management,” opines a source.

“Banks are supposed to have robust risk management in place, especially in cases where they simply earn off the safest form of investment – government lending,” he adds.

A source at the SBP, on the condition of anonymity, explains they are sympathetic to banks having trouble reaching their CAR. Despite that, this decision bails out banks from their regular day-to-day business decisions that went wrong. “This removes the repercussions of bad-decision making.”

“The SBP saving the banks every time they face a loss just sets a wrong precedent, especially at a time when the banks are taking the SBP and Ministry of Finance for a ride on yields. You’re just showing banks they have more power.”