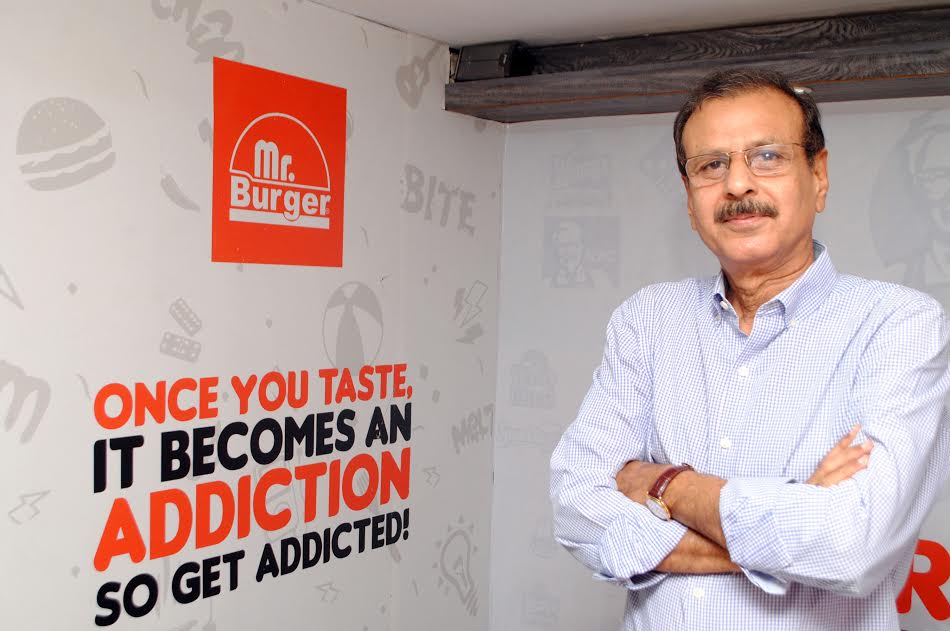 Mr. Burger, which is known for introducing the concept of burgers in Pakistan, has opened for franchising for the first time in its 36-year history – the move comes as a fresh attempt to regain the past glory of what was once the best burger joint in Karachi.

Owned by the Raza family, the Karachi-based burger chain has entered a franchising contract to expand its footprint across the country. It opened its first franchised outlet at Khayaban-e- Badr, Defence in August 2016 and looks set to launch another at Sindhi Muslim anytime this month.

The franchisees Imran Sheikh, Mohsin Abbas, Zubair Mansha and Faisal – who were all bankers previously – will open three more outlets within two years. Later on, the owners plan to expand into other cities of Pakistan by 2018 to grab a slice of what experts say is the world’s eighth largest fast food market.

Taking the franchising game a step further, the family has also finalized franchising deals in Houston, U.S and Toronto, Canada. Although Ashfaq Raza, Managing Director of Mr Burger, did not disclose specific details of the deal but in a telephonic conversation with Profit he confirmed that the burger chain’s outlets will be functional in both the countries in next three to six months. Raza himself will be travelling to U.S and Canada sometime next month in order to settle the paperwork for the deals.

Once a darling for all burger lovers in Karachi, Mr. Burger had been in trouble since the early 2000s with its popularity diminishing. It has opted for the franchise model at a time when the market has already become very competitive because of a strong presence of multinational and local chains.

According to an estimate by Al-Jazeera English, Pakistan’s fast food market is expected to grow 30% by 2017. The market, which industry experts estimate at approximately $1 billion a year, is dominated by the likes of international players such as McDonald’s, KFC and Burger King. On the other hand, local names, such as Burger Inc., Burger Lab, and Burger Shack, which are comparatively newer entrants, are giving tough competition to the pioneers of burgers in Pakistan that are trying to make a comeback.

“Back in 1999 there were security issues and we had to move to the United States; we handed over the management to some people but they didn’t do well thus the business suffered,’’ said Raza, one of the nine brothers who own the company.

The MD and his brother Iqbal Raza – who conceived the idea of a burger joint during his international travels of 1970s as crew member of the national flag carrier – returned to Pakistan 11 years ago to save the falling burger empire of the family.

Reviving an old business after it has hit rock bottom is tougher than establishing a new one, Raza acknowledges. “It is like introducing Mr. Burger again, as we did in 1980.”

Starting from scratch once more, the Raza brothers are determined to take their family business back to the glory days – they are betting on the “taste Mr. Burger has maintained over the years”.

Can Mr. Burger make a comeback amid strong competition both from local and international burger joints? Raza is confident it can. If history is any guide, one can’t rule out this brand, which taught Karachiites the difference between a burger and a bun kabab.

Mr. Burger is said to be the pioneers of burgers in Pakistan – and rightly so: after international burger chains McDonald’s and Burger King had turned down the Raza brothers’ requests for operating a franchise in Pakistan, the latter took the matter into their own hands and decided to open a local burger chain in Pakistan.

As opposed to international chains, which believed Pakistan was not ready for burgers, the Karachi-based burger joint, which opened its Nazimabad outlet in 1980, made a market of its own and that too quite quickly.

“At first, when we gave our customers wrapped burgers they did not know how to eat them! We actually had to tell them not to take off the whole wrapper, it will be easier and cleaner to eat like that,’’ Raza said recalling the struggles of initial days.

‘’People did not know what a burger was, they only knew ‘bun kabab’ (a local version of a burger),’’ says the first generation owner.

Mr. Burger introduced fast food trends to ordinary Pakistanis at a time when the most modernized citizen was defined as one who had been to Europe or America – and there were not many of them.

In a country where Tikka and Bun Kabab ruled the restaurant business, Mr. Burger embraced globalization: a French artist designed their logo – depicting a burger itself with ‘Mr. Burger’ replacing the patty, they imported cheese slicers from the U.S., and produced raw material at a factory in Nazimabad.

Despite the unfamiliarity of masses with burgers, trials and errors to find the perfect recipe, and lack of technical support and staff at the burger joint, Mr Burger’s first outlet in Nazimabad received better than expected response from Karachiites and people from all walks of life became Mr. Burger’s fans.

According to an article published in Al-Jazeera English, the current Prime Minister Nawaz Sharif and former President Asif Ali Zardari have also been Mr. Burger’s visitors and fans of its chicken burger.

However, things started to change for Mr. Burger when McDonald’s and KFC entered the market in the late 90s.

Soon after, the market, which once knew Mr. Burger as its only go-to fast food restaurant found more options to experience the fast food taste. Seeing the popularity of international burger chains, many local investors also jumped the bandwagon and by mid 2000s, the fast food industry itself expanded many folds.

Today, KFC reportedly leads the fast food market with its largest 37 percent share, it is followed by McDonald’s with 26 percent, whereas other foreign franchises such as Hardees etc. hold 6 percent of the market share.

By contrast, the market share of Pakistan’s first local joint had been shrinking rapidly. From its peak of 14 outlets, the business reduced to only eight as of today. Although its flagship store of Nazimabad and the Boat Basin outlet, one of its oldest and most profitable branches remain operational, the famous Tariq Road outlet and the fancy Gulshan e Iqbal outlet, once a cash cow, were closed after suffering heavy losses.

After coming back from the US in 2005, Raza and his elder brother Iqbal were continuously in efforts to regain the lost business. However, due to the stiff competition and inclusion of numerous local chains in the market it was seemingly difficult for Mr Burger to survive.

Raza says, in the end franchising seemed to be a viable option for sustainability and expansion. ‘’Most of the family is in the US now, we don’t have as much manpower as we had in early 80s, franchising was one way we could expand the business and it shares the burden with the franchisee,’’ says the Managing Director.

In last 10 years, the burger joint was either closing its outlets or remained at a stagnant position. However, since the franchising contract, Mr Burger has been able to open two new outlets which have enabled the family to further revamp and restructure the business, Raza says.

Franchising has also provided the burger joint with extra cash-flow as it will get up to 5% of monthly revenue from each franchise outlet, and a (one-time) royalty fee. Moreover, opening up of new franchises will expand its footprint but the investment of over 1 crore will come from the franchisee’s pocket to take care of the outlet’s land, equipment, and staff etc.

Other than franchising, Raza says the family is also keen to upgrade the burger joint’s brand image. This is also an attempt Raza is making on various fronts.

As one walks into Rahat commercial outlet, which is owned by Mr. Burger, he finds a drastic contrast between the present day burger joint and the one from the 1980s. The dull orange and white have been replaced by dark grey, yellows, and funky greens and pinks to suit today’s vibrant palettes. The burgers, which once were sold on the basis of their ‘juiciness’, according to Raza, are now displayed better than before on the large pan flexes hung around the outlet. All this in an effort to regain what was lost to competition.

“We sell around 500 burgers daily at this outlet,’’ Raza said of the aforesaid outlet, which they opened over a year ago – this overwhelming response is, perhaps, the reason why they opened their first franchise outlet within three kilometers of this outlet, a practice that is usually avoided in the franchise model.

‘’Internationally, a minimum distance of five kilometers has to be maintained between two outlets of the same flagship,’’ says Raza. Adding, ‘’However, our franchisees had a good location just three kilometers away and we were confident that it won’t affect sales of either of the Mr. Burger branches, that has proven correct so far, both the stores are making more or less the same sales.’’

“We have got many loyal customers who are visiting us regularly and are very happy that the brand is back in the market with the right approach,’’ Imran Sheikh, one of the franchisee partners, told Profit.

Apart from reopening of closed outlets, franchising and rebranding of the joint, Mr. Burger has also outsourced its social media marketing campaigning to Blue-ex, a digital service agency.

‘’It’s social media’s era, everything is on the internet especially Facebook, we are also focusing on that,’’ Raza said pointing towards his smartphone.

There are already indications of a comeback as this sustainability and rebranding has also brought Mr. Burger back on the leading food delivery portals Foodpanda and EatOye, the same food portals, which had discontinued business with Mr. Burger after complaints of substandard quality and services.

“Mr. Burger’s overall strategy is reviving and we are now operating with them throughout Karachi for all of their outlets. They are doing well,” said Nauman Sikandar Mirza, CEO of EatOye and Foodpanda.

All these efforts have resulted in 100% growth in sales in the last one year and the delivery orders via online food portals have increased the business four folds, Raza says.

Pakistan’s oldest burger chain is likely to face stiff competition amidst many new names, but Raza says he has full faith in his ‘loyal customers’ who have been coming to Mr. Burger since its inception. Some, he says, are so loyal that their love for Mr. Burger has been passing on from one generation to the other.

“A woman recently visited us with her teenage children. She told us that she used to visit the Tariq Road branch everyday when she was in PECHS college, and she was introducing Mr. Burger to her kids here,’’ Raza said – and this transition is taking place on both sides because the 53-year- old himself plans to hand over the business to the family’s next generation once it’s back on track.

‘’Our second generation is excited and ready to join the business any day, we have told them to wait a little till things are running more smoothly; and from there they can take things forward,’’ says Raza.