Clicks instead of bricks 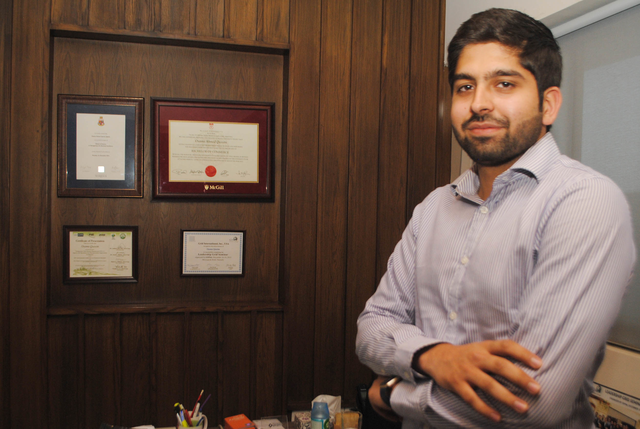 E-grocery, commonly phrased as online grocery is expected to grow 9.5 percent worldwide to become a $9.4 billion industry this year. In another news, retail giant Walmart and E-commerce giant Amazon are both venturing into online grocery segments this year on.

Presumably, the prediction from IBIS World data, the plans of giants like Walmart and Amazon and the presence of 45 million internet users in Pakistan have all given hope to many young entrepreneurs in the country. With the opening of as many as 20 online grocery stores in the country’s $100 million e-commerce market in last few years, the market seems to be taking off from here.

Tazamart.pk, Quick n Easy (QnE), Mycart.pk and Cart.pk are few of the top contenders of the e-grocery segment of the market.

Although the grocery segment represents less than 5 percent of the total e-commerce industry at the moment, the very fact that an average Pakistani household spends 50-60% of income on grocery has made it all too luring for young entrepreneurs to venture into this field.

Some entrepreneurs are not only venturing into this domain but also thriving at their best. One such case is of QnE which is believed to be one of the most powerful players in the industry. Owned by Premier Group of Companies (logistics and pharmaceuticals giant), QnE proudly boasts the 30 percent month on month growth the e-grocer is now experiencing ever since its inception in October 2015.

Brainchild of Osama Qassim, CEO of the company, QnE is currently making a monthly sale of Rs7.5 million primarily because of 100 orders per day. The number definitely seems too small compared to 4,000 daily orders delivered by Big Basket (India) – an e-grocer many Pakistani entrepreneurs look up to for inspiration, but for Qassim who began with 6-7 orders a day, the growth is somewhat satisfactory.

“When I came back [after studies] I was looking at where the e-commerce in the country was going,” says Qassim, a graduate of Warwick University. “There were companies like Rocket Internet with Daraz, and there was Symbios, Dealtoday, homeshopping; they were all into electronics, garments and appliances and nothing like this [e-grocery] existed in the country at the time,” he speaks of the market gap he decided to fill with his e-grocery venture.

“I thought, let’s deliver groceries to doorsteps,” he recalls the first thought that came to his mind.

Today, with a strong backbone of Premier Distributors which deals in brands such as English Biscuits, National Foods and Shield Corporation and an in-house logistics support, QnE is a force to be reckoned with in the small e-grocery industry of the country.

On the other hand, QnE’s major competitor Tazamart.pk is a startup by Arpatech Technology Ventures – a technology incubator. Tazamart.pk currently shelves 8,000 products and maintains a small team of riders to deliver orders in Karachi and Lahore with store being the only operator in both cities currently. Daniyal Akhtar and Muhammad Ali (Founding Members) are the two front faces of the venture that was initially set up by Arpatech after exit of EatOye – the biggest venture incubator owned till date.

Profit sat down with teams of two leading e-grocery stores of the industry to find out what it’s like to operate in virtual space of a country where physical giants such as Imtiaz Super Market, Metro Cash & Carry, Hyperstar and Chase Up Departmental Stores are in tight competition for their fair share in the grocery segment.

‘’Considering that everybody no matter how poor or how rich he is, is doing grocery every month […] we think that there’s huge potential for the strong grocery market which is internationally expected to generate $11.8 trillion by 2020,’’ said Akhtar, the Business Unit Head for Tazamart.pk.

According to Akhtar and Ali, the e-grocery in Pakistan is still in its infancy (estimated $1.5 million annually) especially in contrast to the $7 billion its counterpart made in U.S last year. However, increasing internet penetration and emergence of millennial generation as the primary spenders today are the factors that will help nurture online grocery industry.

This is exactly what both QnE and Tazamart.pk are keeping in mind when it comes to their target market.

For QnE, working women aged 22-32 are the primary customers. “Women who do not have enough time to go out and buy groceries are our target market,” says Farzadaq Ali Shah, Business Strategy Manager for QnE. For Akhtar and Ali it’s the “chunk of hostelites, young males and females […] who are tech savvy and comfortable with online transactions.”

While discussing the target market, Qassim recalled an interesting incident. “I once had to deliver the order myself somewhere in Korangi. When I reached the delivery address, an elderly woman opened the door and upon my introduction she clearly seemed annoyed and her words were: why does he [her son] keeps ordering on internet and gets everything at the door?” the CEO laughed.

“This [e-grocery store] is for young boys too who don’t want to go out for anday (eggs) and doodh (milk) all the time,” Shah jokingly added his own explanation.

Keeping in mind that Korangi is considered to be an area comprising of lesser income households, an e-grocery store’s customer base presence seems somewhat surprising. But for QnE, relatively lesser income areas (earning Rs30,000-Rs50,000 monthly) with usually denser populations are the driving force behind its business.“We receive our orders majorly from Gulshan, North Nazimabad and Federal B Area of the B- and B+ income neighborhoods – areas that lie within the hundred thousand rupees income per month range,” said Qassim.

On the contrary, as many as 50 percent orders for Tazamart.pk are placed from Defence and Clifton area of Karachi and DHA and Johar Town of Lahore – neighborhoods that fall within the relatively higher income brackets.

This pattern goes to show that the e-grocery industry has still a long way to go before the contenders have to worry about each other’s share. As of now, they both have separate clientele which they are catering to swiftly.

According to Akhtar, “the size of the pie is only growing right now.” For now, both Akhtar and Qassim are contented with their own piece of pie which is gradually expanding and creating room for more virtual grocery stores; the competitors are not a problem as of now, they both claim.
However, a major concern for Akhtar is the lack of awareness among general masses regarding the online grocery facility.

‘’Most of our target population doesn’t even know we exist,’’ the Business Unit Head mentioned his foremost challenge. ‘’They need to know that there’s an option and then convincing them to convert from conventional model to the online one is important,’’ he said speaking about his primary agenda.

On the contrary, Qassim is least worried about the conventional grocery stores. For him the conventional stores have their own customer base and online grocery targets a different segment of society. “Imtiaz has its own customers, Naheed has its own; they aren’t grabbing each other’s share. So how can an online store grab their share?” he asked. For Qassim, his niche market is the young generation who now wants to do everything online and he intends to tap the most of it.

To cater to a larger customer base which prefers to do everything online, QnE has also launched a Whatsapp delivery service. This is an additional feature along with the website which receives almost 5,000 visitors per day. And not limiting to clichéd methods of e-commerce, QnE also plans to launch a Snapchat delivery service.

“If a customer wants Coke, all he has to do is send us a picture of an empty Coke bottle on our Snapchat ID,” Qassim said while holding a bottle of the famous beverage. “Our team will get in touch with the customer and deliver him the order similarly the way we do on the website,” the CEO said explaining the Snapchat mechanism.

Profit also spoke to Coca-Cola Pakistan to explore the extent of involvement the company has in e-grocery segment of the market. In an email response received from Coca-Cola Pakistan, Muhammad Iftikhar, Marketing Operations Manager said, “We understand the opportunity that e-commerce presents and are therefore determined to build up our presence in this channel ‘on time’.”

The Marketing Operations Manager also stated that it’s Coca-Cola’s strategy to partner with businesses which specialize in grocery retailing such as QnE and Tazamart.pk in addition to collaborating with existing retail giants such as Metro/ Chase Up that intend to build up an online presence.

This demonstrates that international FMCGs like Coca-Cola are also keen to invest in the e-grocery segment of Pakistan and expect the internet grocery shopping trend to escalate in the coming years.

Other than Snapchat and Whatsapp, both QnE and Tazamart.pk also have Android and IOS native applications.

According to Akhtar, “it’s all about providing convenience to the customers.” For this reason, Tazamart.pk was the first store to launch an application for both Karachi and Lahore customers.

As of today, Tazamart.pk stands out as the sole operator in multiple cities i.e. Karachi and Lahore. However, QnE plans to take over Islamabad by July this year, where Tazamart.pk also plans to head. Following this, QnE will hit Lahore by the end of the year.

The expansion plans discussed by both the e-grocers indicate the faith these young entrepreneurs have in the online grocery market which is predicted to globally grow at a compound annual growth rate (CAGR) of 21.1 percent reaching nearly $18 billion by the end of 2018.

In Qassim’s words, “After all, giants like Walmart and Amazon are stepping into e-grocery, there must be something in this industry, right?” he asks optimistically.

Why would a government venture into the high-risk business of venture capital funds?
Read more
FEATURED