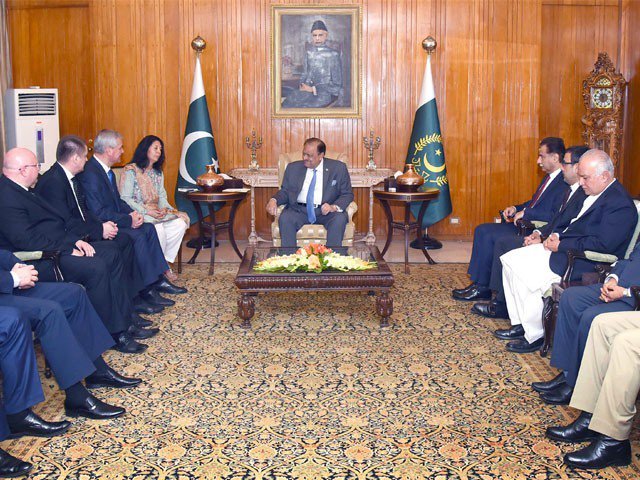 Pakistan regards Belarus as an important country and is keen to further bilateral relations in various sectors to the mutual benefit of both countries, said Pakistan President Mamnoon Hussain on Tuesday.

Talking to Belarus National Assembly House of Representatives Chairman Vladimir Andreichenko, Hussain welcomed Belarus to join the China-Pakistan Economic Corridor (CPEC) hoping it would quicken the pace of development in the region.

He appreciated efforts of the political leadership of Belarus to promote bilateral relations with Pakistan and hoped that the anticipated visit of Pakistan prime minister to Belarus in August this year would be instrumental in furthering bilateral ties between the two countries.

He said positive developments on economic and political fronts between the two countries had provided solid basis to bilateral cooperation, adding that regular exchange of high-level visits and parliamentary delegations was reflective of growing partnership between Pakistan and Belarus.

The president underlined that there was scope for mutual cooperation in agriculture, pharmaceutical, manufacturing of light machinery, oil and gas sectors between the two countries.

Also speaking on the occasion, Andreichenko said his country was desirous of enhancing bilateral relations with Pakistan and called for launching joint ventures in various sectors to the mutual benefits of the two countries.

He said there was a lot of scope for investment in pharmaceutical sector of Belarus and invited Pakistani pharmaceutical companies to take advantage of the opportunities.

Both countries should work together for increasing bilateral trade as envisaged by the leaders of two countries, the Belarus representative added.