Paxi: countering female harassment one ride at a time 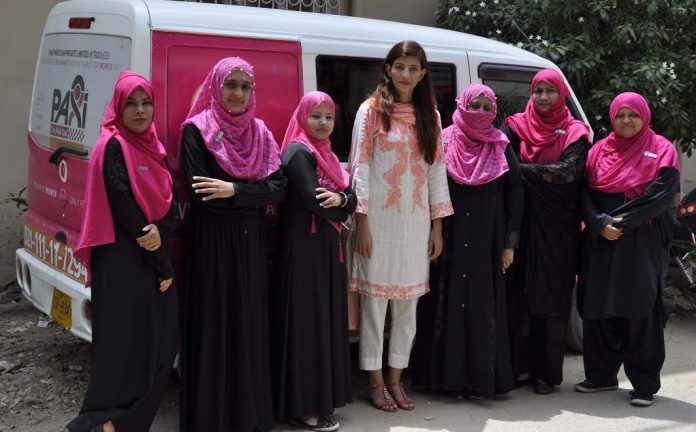 A few months ago after getting her two older children married and sending her youngest son to Malaysia, 47 years old Rubina Naseem did not know what to do with her time anymore. After wandering around to find ‘a new purpose in her life’, as she says, she found a job opening on social media in Pakistan’s first women only cab service – Pink Paxi by Paxi Pakistan.

The popularity of ride hailing services such as Uber and Careem among females and the unsuitable condition of public transport inspired Zahid Sheikh – CEO Paxi Pakistan – to initiate a cab service for women driven by women.

Launched on March 23, in Karachi, Paxi is the first ever private cab service that exclusively caters to women travellers of the metropolitan. With over 7 Suzuki Every Vans and Nissan Clippers – which display the  company’s pink and white branding – Paxi has a fleet of female drivers who are well trained for driving, interpersonal communication and safety measures.

As many as 22 percent of Pakistani women are a part of the country’s workforce. Previously, most of these women used public buses, rickshaws and taxis to commute on daily basis; however with the launch of ride-hailing online cab services two years ago, a large number of women have shifted to the new transport medium.

A correspondent for Profit  carried out an informal survey on a women only group on Facebook, and out of 50 respondents, only 1 had not used any of the online cab services.

“I work as an audit trainee and for my job I have to travel to various parts of the city. Previously I used rickshaws but after the launch of cab services in Pakistan, they are my go to option,” said 23 years old, Habiba Farooqi who considers these services safe, reliable and pocket friendly.

“Women who are travelling for work purposes [or other] usually face harassment, we want to ensure that their travelling can be as safe as possible with their fellow women,” said Iqra Hameed, Marketing manager Paxi Pakistan.

“Harassment is not only physical or verbal, it’s non-verbal, emotional and comes in many forms,” said Hameed. “A rickshaw driver adjusting his rear view mirror to eve tease is also harassment, an inappropriate remark of a conductor in the bus is another form of harassment, we want to counter that,” she added.

It is estimated that as many as 55 percent of women travellers face some sort of harassment while commuting. The international online cab services Uber and Careem has male drivers as well as females but the background check by both the companies and facility of ride tracking that can be shared with family and friends is what draws female passengers to these services.

Paxi Pakistan decided to take a step further and introduced a women only cab service which is driven by trained women drivers referred to as Pilots. “Most pilots belong to the age group of 35 years and above while some younger pilots are also joining Paxi’s fleet”, said Hameed.

Naseem, is also a part of the 15 member fleet that is a part of the newly found venture. With a basic salary of Rs 20,000 ($200 approx.) and performance based cash rewards, Paxi Pakistan is also helping women like Naseem to earn a livelihood.

“I think it’s an amazing opportunity for women like me. With minimum formal education and only on the basis of good driving experience, I was hired for this job which helps me be productive and keeps me busy,” said the Paxi pilot, dressed in her pink scarf and black long-coat uniform.

The pink service is currently available on-call; this is done to maximize the cab’s reach to a larger customer base. Furthermore Paxi can also be hailed on the road, like any regular taxi, however a security code has to be entered by the passenger to start the ride. The company soon plans to launch a mobile application for the tech savvy segment.

Paxi Pakistan started around two months ago and  is offering multiple services. Although the face of the venture remains the women only cab service, the ride company also offers bike service for males, a general cab for both men and women and bike delivery service.  The women only Paxi also offers van service for pick and drop on various routes – mainly for office going women.

“Unlike other cab services, Paxi is not dependent on driver’s availability,” said Hameed. “They have to report at the office at 7 a.m. and from here pilots proceed to their routine pick and drop routes for office going females. Once they are back, they take regular rides throughout the city,” explained Hameed of the service that currently has 18 regular customers using the van service on a daily basis.

However, due to security concerns a few areas have been restricted by Paxi Pakistan for women drivers and passengers to travel to, this according to Hameed is one the many safety measures the company has taken to ensure safety of both the pilot and the passenger.

“We cannot provide a 100 percent guarantee, what we can do is take safety measures and that is something we are working on every day,” said the Marketing Manager. For this purpose, Paxi has trained its pilots to counter any emergency situation; from installation of fire extinguishers to availability of first aid kit, it is taking all preventative measures. Moreover, Paxi Pakistan is also offering accidental insurance to both riders and drivers in case of any incident.

“Installment of CCTV in the cars is our next step, we have also trained our pilots for self-defense in order to maintain their safety and CPR training was also conducted in case there’s an emergency during a ride,” said Hameed.

Despite the novelty of the idea and need of a women only cab service in a country like ours Paxi has been deemed as an ‘expensive’ alternative for public transport by market experts. With a per kilometer price of Rs15 and per minute price of Rs3, many in the market consider the service’s rate higher than its competitors.

“We have done branding on the cars and equipped our cars with extinguishers and kits, we are training our pilots for at least a month before sending them out on the road, these things cost us and that’s why people might feel we are expensive,” explained Hameed.

She further went on to say, “But we know that our quality is up to the mark, even better in some cases, and once the demand is created for a women only cab service, we will lead the market.”

According to Hameed, the demand of the cab service is still on the rise and the recipient of ‘Inspiring Woman Award’ – an award for highest numbers of ride by Paxi – Kiran Rao alone made 24 rides in one week.

“It’s all about capturing the market,” said Hameed of the strong female consumer base which has given a new niche segment to the ride hailing services to focus on.

- Advertisement -
Facebook
Twitter
Linkedin
WhatsApp
Email
Previous article“Newspapers are in trouble, Journalism is not”
Next articleReturn of the Stay-at-Home Mom: The Way Forward

After being frozen in time for three years, the bank is making quick moves to get back in the race
Read more
FEATURED