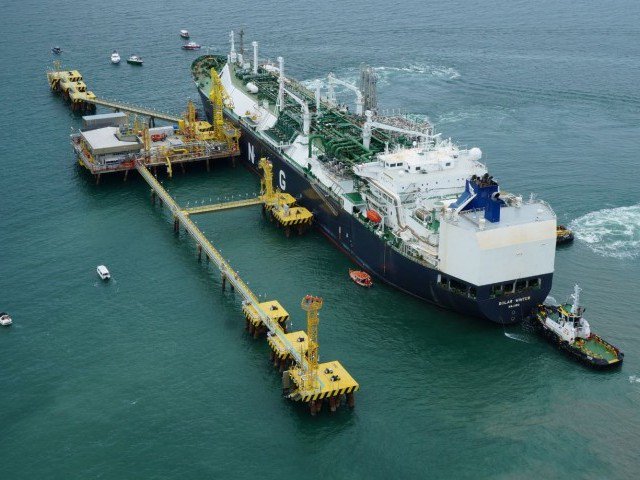 — Pakistan-owned project to benefit power, fertilizer, textile and other industries

The terminal was established by the Engro Terminal Limited within a record time of 330 days and a capacity to regasify up to 600 mmscfd. Speaking at the ceremony, Prime Minister Abbasi said that the government brought this inexpensive source of energy to the country in a record time of less than 14 months.

He said that the previous three governments made several attempts to introduce LNG source of energy but failed. He said that other sources of energy, like oil and nuclear, were considered as expensive means as the country required an integrated and efficient source to overcome its crippling energy needs.

The bids for the whole process were completely transparent and world acknowledged government’s efforts in this regard, he added. He said that the world was thinking that the project would take several years but the government succeeded by introducing the LNG-based energy.

He said that within the short span of the government, the first LNG terminal system had started working. The completion of terminals was necessary for supply of energy, he said and thanked the authorities concerned for making the task possible.

He said that no terminal in the world had been completed in the shortest time with a full re-gasifying facility. The terminal has so far handled 100 LNG cargo ships with 6.1 million tons of LNG. It would benefit power, fertilizer, textile and other industries from huge supplies of Regasified Liquefied Natural Gas (RLNG), he added.

He said that with a capacity to inject 600 mmscfd RLNG in the system, Engro terminal emerged as the single largest gas source in Pakistan. With the supply of RLNG, the country was saving about $1.5 billion each year due to fuel savings when compared with other expensive energy resources like diesel or furnace oil, he added.

The prime minister said with supply of RNLNG, the CNG sector had been revived with ample supply of power for the fertilizers industry. He said that the second terminal would start functioning in November followed by at least three other terminals in the private sector.

He said that it was a good step for the private sector to participate and build their own terminals keeping in view the largest demand and market. Expressing his confidence, the prime minister said Pakistan energy issues would be resolved soon and termed the inauguration of the terminal a great success in the right direction.

It was a Pakistan-led and Pakistan-owned project for energy solution which was made possible within the shortest time when compared with other countries of the region including Bangladesh.

Fehmida said: “We are moving towards the resolution of energy crises that is vital for our growth. This was an unthinkable scenario just a few years ago as despite the LNG policy being enacted in 2006 there had been no practical move to develop the LNG ecosystem,” Jamali said.  Pakistan is saving around 1.7 billion dollars each year due to fuel arbitrage savings between diesel and LNG alone.

She said that with the supply of LNG, more than 2300 megawatts power generation capacity had been brought online or switched from more expensive liquid fuels.

“Similarly, revival of fertilizer industry is also made possible with a substantial increase in production. This contributed significant savings to the national exchequer and had direct contribution to GDP,” Jamali said.

She said that import of LNG and construction of more terminals was the beginning of regular gas supplies which would reduce the gap between supply and demand of the energy and will help in triggering economic growth. This is a great step to transforming the national energy landscape and balance energy mix that is tilted towards oil, she added.

Jamali further mentioned that the local industry was pinning high hopes on the government to tame the energy crisis in order to trigger growth. She urged the government to explore the construction of gas pipelines through the private sector, expedite work on the south-north pipeline and expedite development of the new terminals.