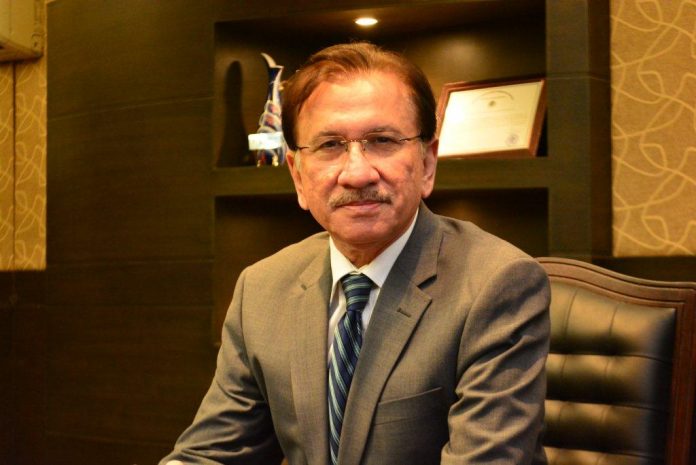 From 52,000-plus, the KSE-100 index’s fall to 41,000 points or thereabouts in under three months, Haroon Askari, Acting Managing Director (AMD) PSX remains unperturbed. To him, PSX is still sound and stable – “I see no panic in the market”, he brushes off whatever concerns an ordinary investor may have.

In an exclusive talk with Profit, the Askari maintained, the ongoing decline has been caused by the foreign investors cashing in their gains. Otherwise, “the PSX system is functioning smoothly, with no incident of default by any broker or clearing agent.”

Having been entrusted with Acting Managing Director’s position on June 16 2017, for the second time in about seven years, Askari claims, Pakistan’s risk management system to be more competitive in comparison with other Asian stock markets owing to the absence of derivative trading. “In markets where derivative trading exists, the risks are higher.”

In the last 50 years, he claimed with a sense of pride, “We don’t remember any PSX brokerage house having defaulted or being unable to pay to a client.”

Having doubled in value since 2013

At around 22,000 points circa mid-2013, despite depletion, the since rechristened PSX is now at almost double the value at 41,000-plus – with the possibility of bouncing back to regain the lost ground. In June 2017, the KSE-100 index had touched all time high to 52,300 points level – making it the best performing market in the Asian continent.

Early in 2017, PSX had suspended licenses of seven brokers from Islamabad and Lahore on the charges of cheating public money. These brokers never defaulted with PSX. The money of the clients was with the brokers and they did not pay them back, therefore, we have to take such measures to cancel the Trading Right Entitlement Certificate (TREC).

Askari further claimed, “The Stock market had paid Rs1.2 billion to the PSX investors in the last few years. The claims we received were thoroughly investigated and the payback was in accordance with the rules and regulations.

“Unfortunately, a few big clients could not get their entire investment back, but the small investors of up to Rs0.5 million or up to 90 per cent of the claims had been cleared. If you calculate in percentage terms, the clients who invested in millions of rupees received bigger sums compared to small investors.”

Having been part of the PSX management since December 2005, Askari says the future outlook of the PSX is based on the fundamentals of national economy. “These are strong. The economy is growing at 5.3 per cent of GDP; the profitability of the corporates has continued to improve in the last few years. Every listed company is sharing its gains with the investors. So, now we can say that overall things have improved and that there should be no panic among the investors.”

Askari blames the recent decline on the investors anticipating far too much from PSX’s induction in MSCI–EM. “Post the MSCI-EM induction, the expectation that international investors will make a beeline for our stocks turned out to be untrue.” Whatever inflows PSX was expecting from the MSCI could not materialize and that turned out to be a dampener.

And those who had purchased the MSCI-backed scrips awaiting appreciation bailed themselves out once upward movement in these was conspicuously absent.

With the main motive being making profit, the big brokers only invest in equities, and never on management, directors or PSX. The brokers know very well in which company they should invest or which company’s share is worthwhile. “It is very difficult to calculate which broker is making an investment in which company, and how much was he investing.” The sale and purchasing of shares is driven by merit, with the investors making their decisions on technical grounds. The investors never see who is the director or MD of the PSX, who is coming or going, they only look at the stock they were buying, the market sentiment, prevailing political trends and the law and order situation.

After induction of Chinese Directors, there is no change in PSX as it is a regulated entity. SECP is its major regulator of PSX and it has the right to do it. It (PSX) runs through a regulator.

The recent federal budget was not good for the local and foreign investors. “The government ignored PSX’s recommendations in the budget for the ongoing fiscal.”

“It is also true that the PSX latest were disappointed by federal finance ministry’s measures, making it one of the reasons for the bearish trend,” he added.

We had requested the finance ministry to look at our recommendations and, we were confident that if implemented, our stock market would surely emerge stronger, to the extent of crossing the 55,000 point level, said Askari.

“After the budget, we have sent a number of missives to the finance ministry as well as the prime minister’s office, with the plea to cut down the Capital Gains Tax. But we have yet to see some positive response from that end.”

With the induction of Chinese directors, the stock market has improved its governance. “The best exchanges in Asia have through a consortium become the PSX partner – which is a good sign for our bourses and our economy. Now our local investors can proudly claim that we are the world’s best market.”

A few months back, in the local media as well as internationally, we advertised for the post of PSX’s managing director, resulting in a number of applications. The Board had shortlisted the name of a Canadian citizen, but nothing is final yet. The next Board meeting shall ponder over it.

Amid so many positives, Askari candidly shared the negative: for the last one year, that is 2016 onwards, the foreign investors have been the net sellers. The reason behind it is that they purchased shares of local companies when the market was at 6,000-7,000. Now they think that this is the best time for them to make hay. Despite their divesting, we are not witnessing any panic in the market, he claimed.

The general observation is that short term buyers were not happy, as the market bounces up and down rapidly. And the investor-base is not on the increase significantly.

By the end of December 2016, the investors’ account of ‘Open End Funds’ were 221,018 while such accounts had stood at 202,018 on December 2015. It clearly reflects that the mutual funds business is growing fast.

Askari has been General Manager of Operations at Karachi Stock Exchange (Guarantee) Limited since December 1, 2005, and has previously served as KSE Acting Managing Director from November 2010 to April 2011. Prior to that, he was one of the directors at National Clearing Company of Pakistan Ltd.