US Senate plan would delay corporate tax rate cut until 2019 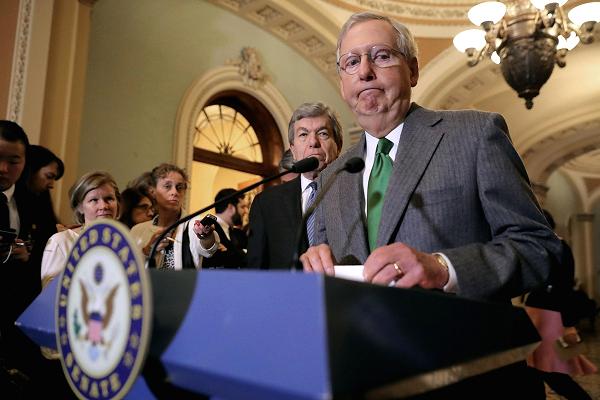 WASHINGTON: The US Senate Republican tax cut plan being unveiled on Thursday would delay until 2019 a reduction in the corporate tax rate and fully repeal the federal income tax deduction for state and local taxes, two key differences with a House tax plan.

President Donald Trump and fellow Republicans who control Congress have promised deep tax cuts that they say would energize the economy, but emerging differences in the Senate and House of Representatives proposals could complicate congressional passage.

As the House tax-writing committee put the finishing touches on its bill to provide the biggest US tax-code overhaul in decades, Senate Republicans were set to announce their separate plan later on Thursday. Congressional Republicans are aiming to pass the legislation by the end of the year.

The Senate plan, like the House version, would cut the corporate tax rate to 20 percent from 35 percent, but would delay this by one year until 2019, said Republican Senator Bill Cassidy, a member of the tax-writing Finance Committee.

The one-year delay in the corporate rate cut and ditching the SALT deduction are measures lawmakers are considering to offset the revenue losses that would result from sweeping tax cuts.

Cassidy added that a repeal of the requirement under the Affordable Care Act, or Obamacare, that individual Americans obtain health insurance or pay a fine would not be included in the Senate plan being unveiled on Thursday.

House Speaker Paul Ryan said he would like to get rid of this so-called individual mandate, which is a key part of the healthcare law that Republicans have tried but failed to repeal, “any way I can.” There were discussions about whether to include the provision in the House tax proposal, he said.

The nonpartisan Congressional Budget Office said on Wednesday that repealing the individual mandate would increase the number of Americans without health insurance by 13 million by 2027.

Cassidy said there would be a partial repeal of the estate tax on inheritance paid by the richest taxpayers in the Senate version.

The Senate plan was expected to add less to the federal deficit and to be more appealing to moderate Republicans in that chamber, setting up the possibility that it, not the House plan, could become the version most likely to be passed ultimately by Congress, said analysts and lobbyists.

Trump, who took office in January and is still looking for a first major legislative success, has made tax cuts a top objective.

Wins by Democrats in state and local elections in Virginia, New Jersey and elsewhere on Tuesday increased the urgency for Republicans, who control both the White House and Congress, to make good on their campaign promises on taxes.

“We’re going to get this over the finish line,” Ryan said.

Republican Senator John Hoeven said the Senate proposal would keep seven tax brackets, differing from the House version, and lower the rate for the richest taxpayers to 38.5 percent. The House version did not cut the top rate, which is currently 39.6 percent.

The SALT issue could be pivotal. There are enough House Republicans from high-tax states to torpedo the tax bill.

Republicans will need to prevent defections in their own ranks to get legislation approved given that Democrats are so far united in opposition, blasting the Republican proposals as giveaways to large corporations and the rich.

Democratic leader Chuck Schumer said repeal of the SALT deduction and other provisions would hurt middle and upper-middle class Americans.

“Passing this plan won’t help Republicans climb out of the hole they are in, it will bury them deeper. … This bill could be your political doom,” he said on the floor of the Senate, where Republicans will need to be especially tightly united given their slim 52-48 majority.

Ryan indicated that the House will not simply pass whatever the Senate approves in order to get the bill to Trump, saying a House-Senate conference committee will have to work out differences between the two versions. The resulting compromise would need to be passed by both chambers before going to Trump to sign into law.

The House bill would add $1.7 trillion to the federal deficit over 10 years, the nonpartisan Congressional Budget Office said on Wednesday. That would violate a congressional budget rule requiring that the tax legislation add no more than $1.5 trillion to the deficit.