Slow start for the week as investors unclear about finance minister 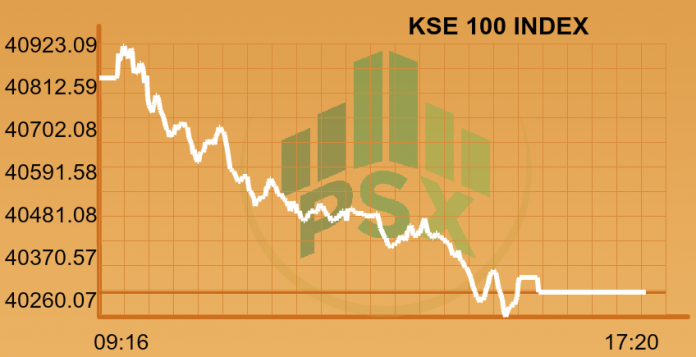 LAHORE: Pakistani equities after a promising start during the day remained in red throughout the day. The market steadily lost ground as selling pressure exacerbated on account of sizable position in future contracts of Rs 9.4 billion requiring settlement by end of this week. Today, investors even did not pay heed to the $ 1.29 rise in WTI oil price to touch $ 56.6 a barrel.

Investors were also concerned about government failure to achieve a breakthrough in negotiations with sit-in protesters. Many fearing further continuation in a deadlock between both the parties might turn the situation volatile. The confidence of investors who have already been reluctant to trade, indicated by low volumes, has taken another blow after the confusion regarding finance minister’s office. The Finance Minister has been getting treatment abroad and the finance ministry portfolio has fallen under the prime minister’s control, as per cabinet rules.

On the sector front; OMC took away 82 points, while E&P further eroded 65 points and commercial banks withheld 63 points while on the flip side Tobacco added 25 points.

The market volumes depreciated to 93.96 million from 115.57 million of the last session. TRG Pakistan Limited (TRG -4.21 per cent) stroked the top of the volume charts with 13.03 million shares exchanged.

Dost Steel Limited (DSL +0.90 per cent) followed with 8.13 million shares traded as they notified the exchange regarding the possible commencement of commercial operations. The company announced the start of operations by the second fortnight of December 2017, barring any unforeseen circumstances.

The food and personal care products sector was the top loser with 4.27 per cent cut off from its cumulative market capitalization. Nestle Pakistan Limited (NESTLE -5.00 per cent) hit the floor and Clover Pakistan Limited (CLOV) was down 4.98 per cent while Treet Corporation Limited (TREET) lost 4.54 per cent.

Sazgar Engineering Works Limited (SAZEW +5.00 per cent) jumped to its upper circuit breaker taking its 1-year return to over 58 per cent. The company informed the exchange of signing a Vehicle Assembly Corporation Agreement with Chinese Automobile Manufacturer for manufacture, assembly, sales and after-sales service of passenger and off-road vehicles.