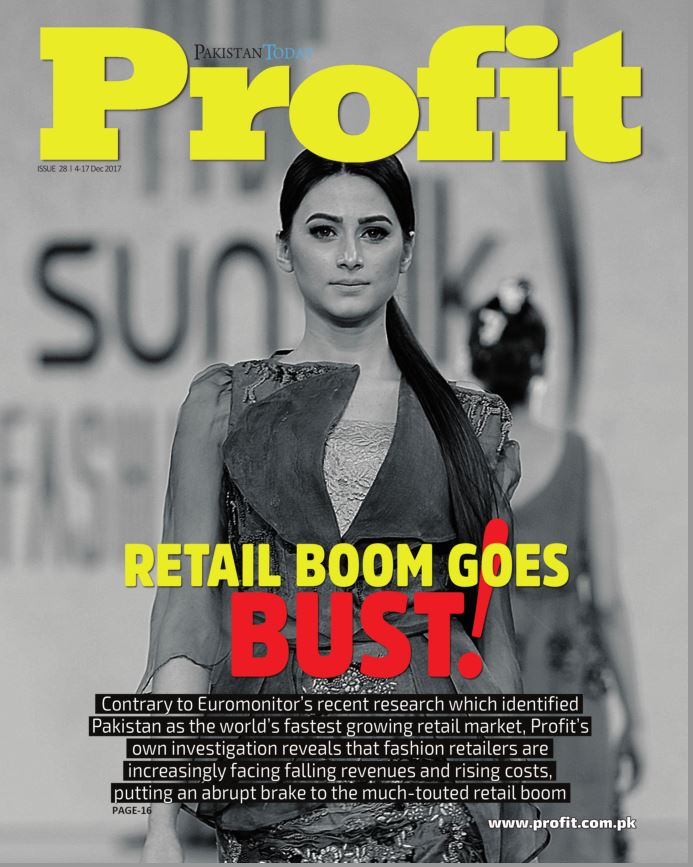 Pakistan’s retail market. Sound out anyone, not just within the country, but also abroad, you’ll hear the same optimism about it. “135 Million Millennials Drive World’s Fastest Retail Market,” read Bloomberg’s headline about the market.

Though there are many sub sectors within retail, the apparel market in particular seemed to have become the poster child for this growth. After seeing one brand after the other being launched, with their respective string of glitzy stores dotting even the third-tier urban areas of the country, one could broadly surmise one simple truth: there’s a lot of money in selling Pakistanis’ clothes.

Well, those good times seem to be slowing down. From retailers in plush, swanky malls staging protests against the latter, asking them to lower their rents as they are not seeing anywhere near the sales that they thought they would, to informal chats with senior apparel sector executives, we are now finding out that the sector is losing its edge, fast.

Why? Well, for starters, consumer sentiment, that unactionable entity, is going down. This is not a treatise on behavioral economics, and we really don’t know why, exactly, consumer sentiment is going down, but here we are. Those viral videos of women physically fighting each other at clothing stores that you remember your cousin WhatsApping you are not showing a scramble over regular pricing, but over sales. The sort of sales that are not sustainable for these brands anymore. Barring those sales, the customers are just not there anymore.

But perhaps the real explanation, one that will be confirmed after the government gets around to compiling the economic activity statistics of this year, could be that the customers actually are there; it’s just that there aren’t as many customers per outlet. There are so many new brands and new outlets of older brands but – huge millennial population notwithstanding – there is still a finite number of customers to go around.

This state of affairs underlies both the serious lack of imagination on part of our entrepreneurial class and also its laziness. They’ll just look at businesses that seem to be doing well and want to jump on that bandwagon, without even doing the research on the sector and its upcoming threats. Nothing appears sexier to our businessmen than the prospect of owning a fourth tyre shop next to three existing ones. If there’s room for three, then there’s room for another one, right?

Well, this Fallacy of Composition seems to have ruined the apparel sector. The newer entrants into the market, whose brands are nascent and whose supply chains aren’t yet too efficient, will take the biggest hit. The heavy hitters, the ones that have significant brand equity and whose supply chain mechanisms are lean machines without an ounce of fat on them, are the ones that will weather the storm by price gouging.

The problem: once this market correction takes place and the newer entrants are weeded out, and things are back to being good again, it will only be a countdown till that first businessman looking for opportunities, says, “Hmm…there seems to be a lot of money in selling clothes to Pakistanis…..”