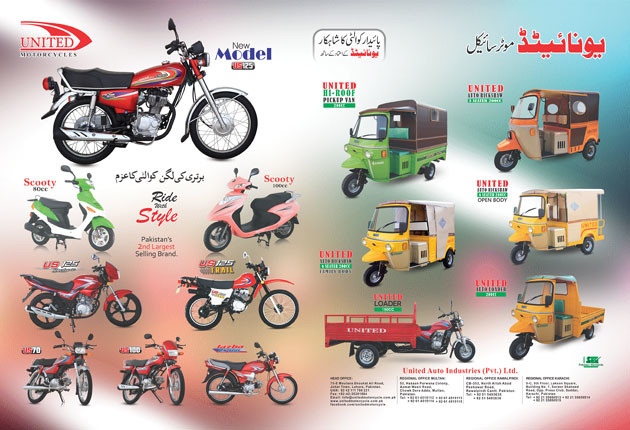 LAHORE: United Auto Industries which announced its entry into car manufacturing last month is set to launch an 800cc car in 2018.

The company which claims to be Pakisan’s second largest selling brand, published an advertisement last month in a newspaper saying it was looking for business partners (dealers) to move forth into automobile manufacturing.

It had sought interested parties to submit their applications for consideration by December 15th, 2017. United Auto’s is engaged in manufacturing of loaders, scooter, rickshaws and bikes in Pakistan.

In a statement to Dawn, United Motors General Manager Muhammad Afzal from Lahore confirmed the company was venturing into car and pickup manufacturing.

He shared the company will be utilizing Chinese technology and will sell its vehicles under the brand name of United. Afzal said local assembly of these vehicles is set to begin in 1st half of 2018.

Since Pak Suzuki Motors is set to end production of its popular Mehran model, the market is afloat with rumours United is planning to bring an imitated version of it with minor design changes and modifications to avoid copyright litigation.

Mr. Afzal clarified its vehicles won’t be an imitation of Suzuki’s automobiles and would be entirely different, having attractive features and meet safety standards. Regarding its pricing, he said it would be affordable.

No investment figure was provided by Mr.Afzal in respect to the greenfield project, plant capacity, level of localization and monthly production number.