Need for deep cooperation in the Energy sector discussed 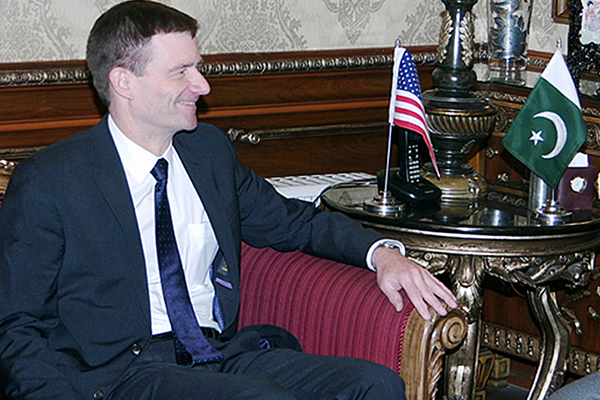 ISLAMABAD: The United States will explore ways and means to assist the Power Division in the establishment of Pakistan’s First Renewable Energy Institute, and also share the expertise of the US National Renewable Energy Laboratory.

This was revealed by the US Ambassador to Pakistan, David Hale who met the Federal Minister for Power Sardar Awais Ahmed Khan Leghari today.

In the meeting, the Federal Minister for Power informed the US Ambassador that government has initiated the process of interaction with all provinces and the federating units for the formulation of Energy Policy and National Electricity Plan. In this regard, the Government has also decided to take into consideration various proposals of the power sector potential stakeholders including the service providers during the formulation of policy and plan.

The Minister appreciated the US General Electric Company for its Repowering Initiative proposal which includes conversion or rehabilitation of existing power generation units across Pakistan.  He said that he has asked GE to be part of the process of energy policy and electricity plan so that their proposal can be materialized based on the decisions taken.

The Federal Minister underscored the need for deep cooperation between Pakistan and USA in the renewable energy sector. He said that renewable energy is the only way forward for Pakistan to meet its energy requirements.

The Minister also informed the US Ambassador on the progress made so far by the Power Division for the establishment of Pakistan’s first Renewable Energy Institute. He said that HEC and AEDB are finalizing the university in Pakistan to house the Institute.

The US ambassador underscored enhanced cooperation between the two countries in the energy sector and assured to appoint a focal person for Energy in the US Embassy to deal with future interactions in the sector.