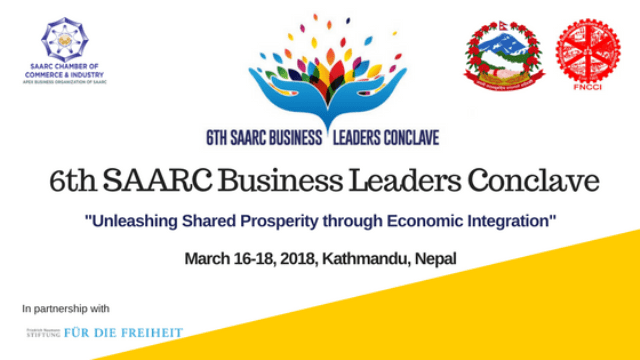 Speaking to journalists after returning from 3-day “6th SAARC Business Leaders Conclave” held at Kathmandu, leader of Pakistan’s delegation Iftikhar Malik said “SAARC countries of this region need to work together with a very strong business agenda to take advantage of our geographical proximity, cultural similarities and economic complementaries that we all inherited in this region.”

He said the conclave was a big success as all the business leaders and ministers from Bhuttan, Nepal and Aghanistan hailing from the SAARC member states  especially Prime Minister of Nepal KP Sharma Oli who graced the mega event unanimously agreed to this point that economy has to be the most important agenda for the SAARC nations despite political challenges and compulsions coupled with political vibrations. Economic agenda has to be the foremost important agenda for the political parties. Unfortunately, in our region, it is not the top priority, somehow due to all our thought process. He said thrusting the economic agenda foremost should be all ours guiding force for our durable relationships. Our political agendas are never-ending. We really need to come out of conglomerate and see how economic agendas can be prioritized and equally materialised.

Comparing South Asia with other regions across the globe, Iftikhar Malik said with more than one-fifth of the world’s population, the SAARC region is home to two-fifths of the world’s poor. However, it accounts for only 3 per cent of global output and 2 per cent of world exports. Intra-regional trade has stagnated at around 5 per cent of its total trade, compared to over 50 per cent in East Asia and around 20 per cent in Latin America. Even

Sub-Saharan Africa, with poor transport and telecommunication infrastructure, scores over South Asia, with over 10 per cent of its trade being intra-regional.

He said India, a connecting land mass and the largest economy of the region, has a special responsibility in increasing intra-regional economic integration and must facilitate access to its large markets for SAARC members. Its above-average growth, expanding the middle-class population, and demand for global goods can prove to be an engine of growth for the region.

He said another issue which is creating hindrance is non-tariff barriers and again it is the duty of India to step forward to resolve this issue by extending cooperation with other member states to boost trade in the region. He said another hurdle is lack of awareness about non-tariff barriers (NTBs) and stakeholders like business associations should organise seminars to make traders aware of the procedures followed by each country. The move would help in increasing trade,” he added.

SAARC member states unanimously widely appreciated the remarkable contribution of “Pakistan” for raising a state of the art 9 story SAARC Chamber headquarters building in Islamabad which speaks of the dedication and wholehearted personal efforts of Iftikhar Ali Malik for successfully taking the project into hand which is now scheduled to be completed by September 2018.

The development of logistical hubs that facilitate the flow of trade across the region would greatly reduce the costs of doing business. Such hubs should be multi-modal, incorporating containerised and non-containerised cargo and moving via rail, road, air and shipping links. “These logistical hubs would connect critical regional corridors, especially with countries having no common borders,” he concluded.