Pakistan not ready to reap full benefits of CPEC 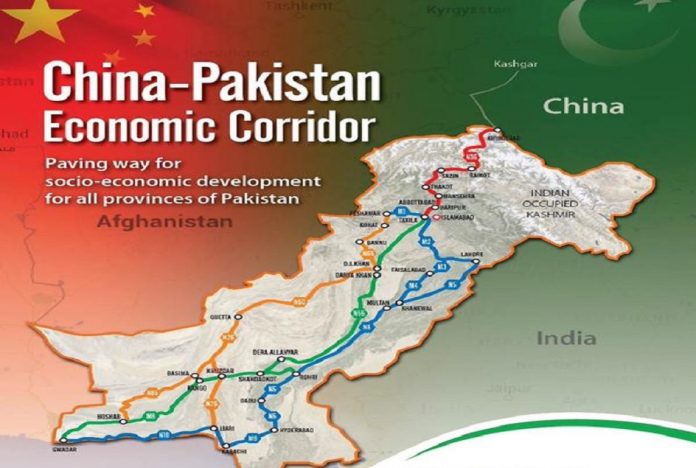 LAHORE: The commander of Lahore corps Lieutenant General Aamer Riaz, stressed the need to remodel institutions in order to get the maximum benefits out of a changing global environment.
Chairing a seminar, “Golden Ring Economic Block – the emerging horizon for Pakistan’s economy‘, organised by the Golden Ring Economic Forum (GREF) which is a strategic economic think tank. Lahore’s Core Commander was of the view that Pakistanis have the capability to adapt and get used to changes taking place in technology, “however, we have been unable to get the required results so far”.
Commander Lahore Corps said that Pakistan has made great contributions in moralising peace in the region, however, forces, well known to the world, do not want peace and stability in the region.
The panellists of the seminar were unanimous in their views that the China-Pakistan Economic Corridor (CPEC) and Central Asia Regional Economic Cooperation (CAREC) projects can be the game changers for approximately 2 billion people in the region, and these projects could open enormous business opportunities for Pakistani businessmen and industrialists. “However, Pakistan’s readiness was the main issue in getting the benefit. they remarked.
The topics covered including Pakistan’s Economic Security in Partnership with Golden Ring Countries by the Dean of Nust, Ashfaq Hassan Khan, Pakistan’s Strategic Economic Compulsions in the Geopolitical Scenario, former Finance Minister Dr Salman Shah,  Banking Financial Mechanism Economic and Trade Development within the Golden Ring Countries by PIDE’s Dr Raja H Mohsin, and’ Absence of Policy Framework for CPEC- Ramifications by Fast Cable’s Kamal Mian.
Leading businessmen, industrialists, chambers of commerce and industry, industry and trade associations, former diplomats, ex-servicemen, academia, and consul generals of four countries were also present.
In his briefing, a well-known economist, dean NUST and former Special Secretary Finance and Economic Adviser Ministry of Finance, Dr Asfaque Ahmad Khan was of the view that economic security has closely been linked with the country’s national security.  A strong economy can ensure a strong defence, which in turn, enhances a country’s power and strengthens national security. He said economic backwardness, on the other hand, generates violence, social conflicts, political turmoil and hence, weakens a nation’s security, he added.
Dr Ashfaq said that economic security is essential for promoting the well-being of the people and providing resources to strengthen ‘hard power’. In today’s global environment, economic security also promotes ‘soft power’ that is, it can win ‘hearts and minds’ of the people across the globe.
He was of the view that connectivity required building up of new infrastructure (roads, highways, railways, ports, communication network, energy) and strengthening the existing ones. Empirical evidence, he said, suggests that infrastructure investment contributes to economic growth and bring prosperity on a sustainable basis.
Dr Ashfaq underlined that importance of infrastructure investment that promotes economic growth through raising domestic demand as well as through trade and investment by solidifying connectivity.
Dr Salman Shah stressed the need to understand the importance and potential of connectivity, and its capacity to contribute to Pakistan’s economy. He said that Pakistan was not ready to get the benefits of CPEC despite what everyone had been talking about it.
- Advertisement -
Facebook
Twitter
Linkedin
WhatsApp
Email
Previous articleFBR registers 16pc growth in first 9 months
Next articleWorsening balance of trade and exchange rate damaging economy