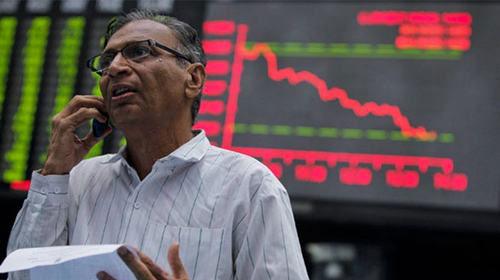 LAHORE: The KSE-100 index was down by 995.66 points on Monday, July 9 as uncertainty prevailed in the market as heads of three banks face investigation in the Supreme Court (SC) coupled with the general political unrest post SC’s Friday’s verdict sentencing the former prime minister Nawaz Sharif, his daughter Maryam Nawaz and his son in law Captain Safdar to jail terms.

“The downturn in the market is because of the current political unrest and the money laundering investigation involving Summit Bank, Sindh Bank and UBL in the SC,” says Arif Habib Limited Head of Research Samiullah Tariq.

The SC on Sunday had summoned the heads the three respective banks in a case related to suspicious transactions carried out through fictitious bank accounts directing the interior ministry to put their names on the Exit Control List.

Samiullah Tariq predicts the uncertainty to stay till the end of the current week. However, he downplays the probability of the market going down by such a huge amount again in that time period, insisting that the worst has already passed.

The SC’s decision came later in the day around the close of market on Friday, hence not having a substantial impact at that time. “The market was yet to respond to the imprisonment decision against the former Prime Minister which came just minutes before close on Friday. Reports stating Supreme Court orders barring Presidents and Chief Executive Officers of top banks and high profile politicians to leave the country added fuel to the fire,” says Capital Stake Director Research Maha Jafer Butt.

Investors were quick to respond and trade screens showed blood red on Monday.

The benchmark KSE 100 index is now trading 26 per cent below its 52-week high.

Muhammad Faran Bukhari
The writer is an economics and business journalist reporting for Profit. He is currently an MBA candidate at LUMS University and holds a Bachelors degree in Economics and Politics from the same university. He can be reached at muhammad.f[email protected] or at twitter.com/muhammadfaran