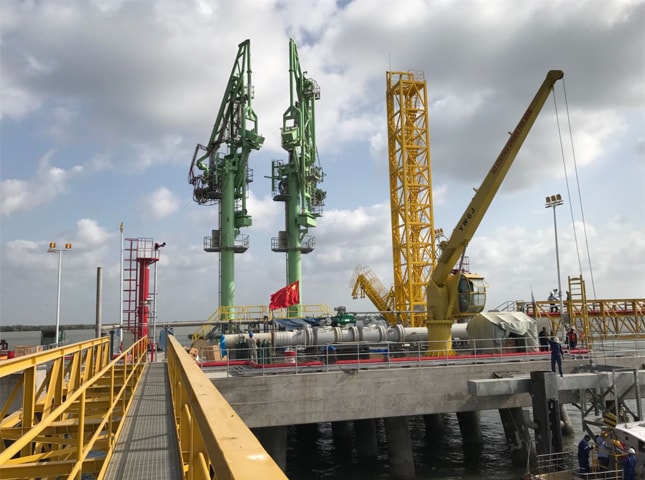 ISLAMABAD: A new controversy has emerged as Pakistan Gas Port Consortium (PGPC) has so far refused to pay customs duty and withholding tax worth Rs2.5 billion. Due to this, a stoppage of regasification through the LNG terminal of PGPC might take place in the future, according to sources.

Well-informed sources in the LNG sector informed Pakistan Today that PGPC’s apparent refusal to clear the third instalment comprising customs duty and withholding tax worth Rs2.5 billion might cause criminal proceedings under Customs Act against PGPC besides stoppage of regasification through LNG terminal of PGPC.

They said two cheques worth Rs480.68million of PGPC were dishonoured by the concerned ban with remarks while the honourable Islamabad High Court has dismissed the writ petition of PGPC. However, PGPC has so far refused to clear the third instalment of outstanding duty and withholding tax imposed for the import of LNG terminal. By refusing to pay customs duty and withholding tax, PGPC has allegedly been committing a violation of LNG operation and service agreement, said sources.

The sources also added that taking cognizance of the matter, Pakistan LNG Limited has called an important meeting of its Board of Directors as the Customs Collectorate Port Qasim has decided to initiate criminal proceeding against PGPC under Customs Act, 1969.  Model Customs Collectorate Port Muhammad Bin Qasim Karachi has issued a demand notice to M/s PGP Consortium Ltd for payment of deferred customs duty on import of floating storage and re-gasification unit (FSRU) by 15 August 2018, said sources.

An available copy of a demand notice of Model Customs Collectorate Port Muhammad Bin Qasim Karachi to PGPC dated 15 August, 2018 informed that an approval to pay Rs1.5 billion worth customs duty in five instalments in one year on defer payment basis was made on 10 January 2018. Similarly, though PGPC has given cheque worth Rs480 million for the payment of the third instalment, yet it (PGPC) stopped Customs to encash it.

The Customs Collectorate has also declared in its demand notice to PGPC that violation may result into the initiation of criminal proceedings under relevant rules besides other actions for recovery of the outstanding leviable duties and taxes including but not limited to stoppage of regasification through FSRU installed at PGPC jetty.

According to Customs notice, M/s PGPC Consortium Ltd imported consignment of “Vessel BW integrity FSRU, Liquefied Gas Carrier RV, equipped with gasification plant and claimed concessionary rate of customs duty 5 per cent in terms of SRO-678(I) 2004 dated 7 August 2004. And, upon specific request/application dated 28 December 2017 made by M/s PGP Consortium Ltd for deferment of leviable duty in terms of section 21A of the Customs Act, 1969, the  Federal Board of Revenue allowed deferment of customs duty vide order C.No1(7)Mach.94 dated 10 January 2018.

The honourable court vides order 26 July 2018 instructed the collectorate not to encash Post Dated Cheque submitted by PGP Consortium in advance for payment of the third instalment. However, on the next date of hearing dated 8 August 2018, the court after hearing both sides dismissed the writ petition of M/s PGP Consortium. And, in pursuance of court order the two PDCs bearing No.8050546669 dated 8 Juky 2018 for Rs454,454,550 and No. 8050546672 dated 28-07-2018 for Rs32,405,473 respectively were sent for encashment to the concerned bank but the same was dishonoured and returned by the bank with remarks that payment stopped by the drawer and cheque returned due to Islamabad High Court stay order dated in WP No 2941-2018.

According to the notice, stoppage of encashment of cheques by PGP Consortium on grounds which are factually incorrect and without legal backing tantamount to breach of terms and conditions and obligations of Deferment Order dated 10 January 2018 and such dishonouring of the submitted cheques constitute a criminal offence under the Customs Act, 1969 punishable under clause 95A of section 156 of the Customs Act.

The Customs Collectorate also declared in its demand notice to PGPC that violation may result into the initiation of criminal proceedings under relevant rules besides other actions for recovery of the outstanding leviable duties and taxes including but not limited to stoppage of regasification through FSRU installed at PGPC jetty.

Now therefore you, M/s PGP Consortium Ltd are hereby directed to make payment of Rs 454,454,550 plus surcharge @ KIBOR plus 3 per cent per annum immediately through pay orders, failing this Collectorate shall be constituted to take action in terms of sub-section 95A of the section 156 besides initiation of recovery proceedings under section 02 of the Customs Act, 1969, said demand notice of Model Customs Collectorate Port Muhammad Bin Qasim Karachi issued for M/s PGP Consortium Ltd for payment of deferred customs duty on import of floating storage and re-gasification unit (FSRU) by on 15-08-2018.

When contacted Iqbal Z. Ahmed to get his stance on the matter stated, he said PGPC has obtained a stay order from the IHC and next hearing will be held on 10 September, 2018.  He also said that petition was heard today (Friday) and fixed for 10 September and there was no adverse order. And the stay was not vacated. There is a court order under which cheques were stopped not dishonoured, said Iqbal Z. Ahmed of PGPC.

Over a question about the demand notice of Model Customs Collectorate, energy tycoon said, this is of no value as there is a stay order.

Sources in the LNG sector further said that PGPC is bound to pay 5 per cent duty over the import of $270 million LNG terminal. But, PGPC stopped clearing outstanding duty with a surprising stance that the terminal was imported on a temporary basis and customs duty do not apply on temporary imports. They said the PGPC has actually imported the terminal following a 15 years long re-gasification contract and customs department is not ready to consider the import as temporary. They also said that chairman PGPC Iqbal Z. Ahmed has submitted another application in Islamabad High Court against the customs duty on PGPC terminal and hearing scheduled to be held on 10 September, said sources.