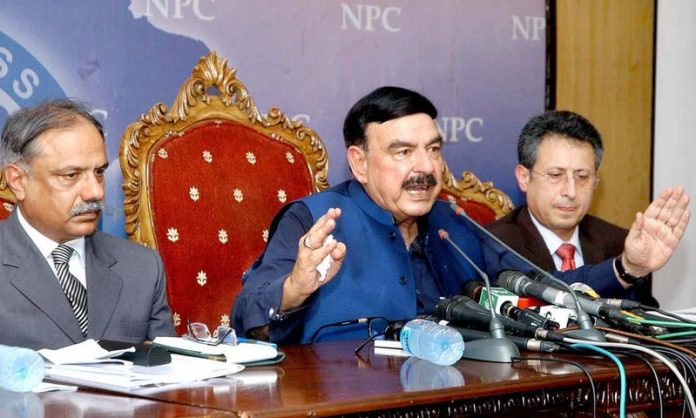 ISLAMABAD: Newly-appointed Railways Minister Sheikh Rasheed on Monday said he will need at least four months to bring Pakistan Railways “back up on its feet”, as he invited investors to benefit from the huge potential of the railways.

“PM Imran Khan is a powerhouse and has asked for only 90 days, I need a little more time but you will see results by December 30,” Rasheed said while addressing a press conference.

“I will double the number of freight [trains] in this [120 day] time period,” the minister said, emphasising that no railway system could survive without a strong freight train system.

“The Chaklala and Margalla stations will be upgraded on a priority basis. I wish to start a fast train from Karachi to Sukkur and one from Rawalpindi to Multan and then Karachi. This would start as soon as we have railway coaches available,” Rashid said.

“We will plant trees on both sides of the track form Keemari to Peshawar,” he said while praising the new government’s emphasis on tackling environmental issues in the country.

Rasheed was of the view that the National Logistics Cell and the Frontier Works Organisation (FWO) should be given a major chunk of the railway construction work, “so that there is no waiting around for tenders”.

The railway’s minister also vowed to solve problems for disabled and elderly members of the community and said that they would start by adding elevators and escalators to railway stations for their ease.

“I am announcing today that Railways is open [for business] anyone who wants to bring any kind of investment, they can. In fact, if overseas Pakistanis want to run [passenger] trains or freight [trains] here, they are welcome to do so, all they need to do is pay us the rent for our tracks,” the railway’s minister said.

Rasheed also invited private companies to brand rail cabins with their product advertisements, as “we do not have money of our own, this is why we are inviting outsiders to come and invest in Pakistan.”

The railway’s minister announced that eight dry ports and 32 railway stations will be upgraded. “We do not have the money to do this ourselves, thus we are inviting private companies to help us. No railway [company] can survive without freight [trains] and neither can we,” he explained while putting forward his plans for Pakistan Railways.

“Again, private investors can take these stations from us, we know that private companies and individuals have no lack of resources in this country and we would like to use this to our advantage,” Rasheed added.

Rasheed invited the public to provide suggestions for the railway department’s improvement through social media. He also said that the public should hold the department accountable for each and every move and call the railways out if they witness any wrongdoing.

“Anyone holding a phone today is a walking talking media cell and we want people to use that power and help us improve. They can give us ideas on how to improve our services and they can call us out on anything that they think is wrong,” he said.

Rasheed also said that the department itself will start using technology smartly and travel agents will be given railway ticket quotas to facilitate travellers. “Our online booking system will also be modernised so that people can book train tickets with ease,” he added.

He also asked that people who had illegally occupied land belonging to Pakistan Railways should vacate it. “We will see what is to be done about this in a meeting to be held on Saturday,” he maintained.