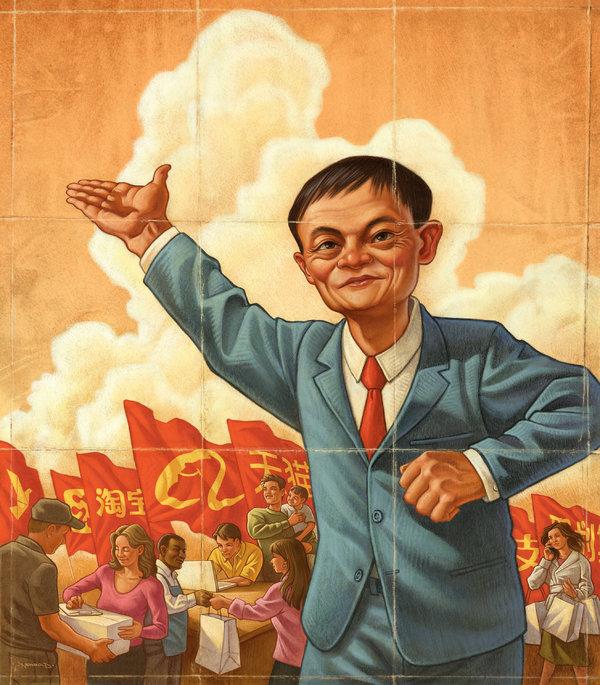 Long before he became China’s most globally prominent business figure, Jack Ma was just an English teacher trying to persuade his friends that they would one day buy things over the internet.

His vision changed China. As Ma makes plans to leave Alibaba Group Holding Ltd., his legacy will be an enduring one. He did far more than just create and build an e-commerce juggernaut into the most valuable company in Asia, impressive as that may be.

He showed that an innovative private enterprise could thrive under a Communist Party regime once hostile, and still at times suspicious, of ambitious capitalists. To a remarkable degree, his path-breaking success created a model that gave rise to a technology industry that rivals Silicon Valley, propelling a Chinese economy on track to eclipse that of the U.S.

Ma is now China’s richest man, worth about $40 billion, and a headliner at global talking salons like Davos. At the same time, he’s complied with — and fiercely defended — his country’s ruling party even as it exerts ever tighter control over media, the internet and any hint of dissident speech. He’s gone so far as to praise the stability of one-party rule and chastise Western companies like Google that objected to China’s censorship practices. His approach demonstrated how entrepreneurial success can coexist with the Communist regime, paving the way for a new wave of startups.

“He’s been a role model for our generation,” said Peiran Wei, a 36-year-old who says he had the confidence to co-found a startup, an app developer called VideoUP, in large part because of Ma and Alibaba.

Jack Ma’s personal story is now the stuff of schoolyard legend. He was born in 1964 to traditional Chinese musician-storytellers in Hangzhou, an ancient capital known for its historic sites and natural beauty. He his English by hanging around the town’s main hotel to practice with tourists.

After working as a teacher, Ma turned to business, starting Alibaba.com in 1999 with 17 co-founders. He wasn’t the most technically savvy entrepreneur, nor would he claim the smartest. But he proved an inspiring leader who could rally his forces to fight foreign intruders or articulate a vision for modernizing China’s economy.

“Intelligent people need a fool to lead them,” he once said. “It’s easier to win if you have people seeing things from different perspectives.”

Alibaba has brought e-commerce to remote villages of China and expanded into artificial intelligence, healthcare and Hollywood movies. Less than 20 years after its founding, the business that Jack and his co-founders built is valued at $420 billion, more than any of the older state-backed enterprises in his country.

“He started his company with 18 people in an apartment and even today whenever I pass that place I think of him,” said Wei, who is also from Hangzhou. “It’s a 20-year-old apartment complex that doesn’t look posh but I still get inspiration from it.”

One of the first to see the promise of Ma was Japan’s Masayoshi Son. His SoftBank Group Corp. led a $20 million investment in Alibaba in 2000 and now holds a stake worth about $120 billion.

“He had no business plan, zero revenue,” Son said of Ma on The David Rubenstein Show. “But his eyes were very strong. I could tell from the way he talked, he has charisma, he has leadership.’’

It was Alibaba’s record-setting initial public offering that altered the country’s tech industry for good. Ma and team raised $25 billion, more than any other company before or since, a wake-up call for venture capitalists that there were fortunes to be made on the country’s startups.

The impact was immediate. Beijing-based smartphone maker Xiaomi Corp.raised venture funding a few months after the IPO at the highest valuation in the world, at $46 billion. It was soon surpassed by Uber Technologies Inc., but the floodgates were open. Venture deals in China rose from $4.4 billion in 2013 to $16.6 billion in 2014 and reached $62.6 billion in 2017, according to the market research firm Preqin. This year, China is on track to surpass the U.S. in both venture capital raised and IPOs.

“The China startup scene wouldn’t exist in the same way without Jack Ma,” said William Bao Bean, a Shanghai-based partner at venture capital firm SOSV. “The celebrity of Jack Ma and the success of Alibaba made startups an acceptable career choice, which has fueled one of the biggest technology markets in the world.”

Ma wasn’t just successful. He broke the mold for China’s business leaders, typically faceless chiefs running mammoth state-owned enterprises like PetroChina and China Mobile. He dressed up like Michael Jackson and tried the moonwalk. He wore a three-foot feather Mohawk and makeup to perform at a company party. And he dispensed Yoda-like axioms that were collected in dozens of management books.

“To many, he’s the face of China’s internet – no one really knows what Pony Ma looks like,” said Bean, referring to the CEO of Tencent Holdings Ltd.

In that role, Ma would occasionally criticize his home country, including for its pollution problems, a potentially dangerous proposition given the power of the ruling party. But especially under current President Xi Jinping, he was forced to quieten his independent voice and often defended the government’s practices against its critics.

Mark Natkin, managing director of Beijing-based Marbridge Consulting, said business leaders including Ma have faced pressure to support the government under Xi, who has emerged as the country’s most powerful leader since Mao Zedong.

“In the last four years the environment has become one in which one must toe the government policy line much more closely,” Natkin said.

China’s government repaid Ma’s fidelity, making it difficult and in some cases impossible for foreign technology companies to operate in the country. Facebook and Twitter Inc., for example, are blocked in China.

In the field of business, Ma is often compared with Amazon.com Inc.’s Jeff Bezos because both of their companies are in e-commerce. But a more fitting parallel may be Bill Hewlett and Dave Packard, the founders of Hewlett-Packard Co. who developed breakthrough innovations and gave birth to the next generation of technology companies.

“During the Cultural Revolution there was no entrepreneurialism – it was punished,” said Wang Huiyao, an adviser to China’s cabinet and founder of the Center for China and Globalization. “Ma represents the first international generation of Chinese entrepreneurs.”