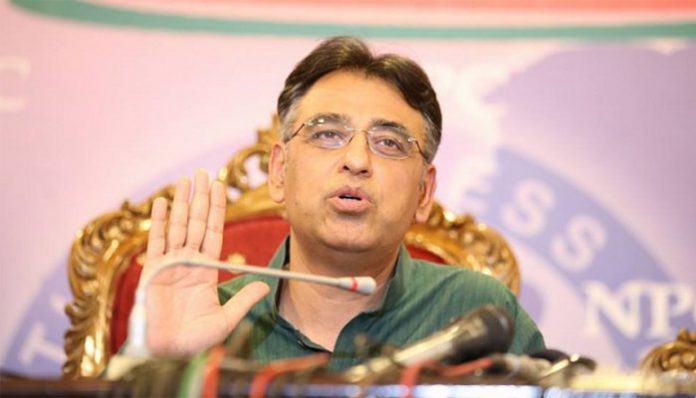 ISLAMABAD: Pakistan will be sharing the details of debt it received from China with the International Monitory Fund (IMF), as there was nothing to hide in this regard, said Finance Minister Asad Umar while talking to media on Saturday.

“Pakistan has received short and cheaper loans from China which would be paid back in three years,” the finance minister told reporters in a press briefing. “Although Pakistan has requested IMF for $12 billion, but the lender is likely to agree for less than the demand. Since formal talks would commence with the IMF team on November 7, it is premature to talk about conditions of the lender.”

Umar said the decision to approach IMF was made after due consultations with all friendly countries, including China and Saudi Arabia. Like the previous programme, he added, the next programme would also be for three years. He, however, avoided sharing the expected amount from the fund.

“The government has approached the IMF owing to the wrong policies of the previous government. I had admitted on floor of the house in 2013 that former finance minister Ishaq Dar had no option but to approach IMF, keeping in view the economic condition after the Pakistan People’s Party (PPP) government. We would also be responsible in case the next government goes to the IMF,” Asad Umar remarked, while criticizing the opposition parties for portraying the recent approach to IMF as a “historic” development.

“Prime Minister Imran Khan, during the election campaign, had never shunned the IMF option, as I had briefed him clearly about the economic situation where IMF was the only solution,” the finance minister maintained.

Talking about the US objection on the IMF programme, he said that the US should not object the move as it has no veto power to force the fund to change its decision.

“I totally disagree with what the US State Department spokesperson Heather Nauert said regarding the Chinese debt,” the minister said, referring to the spokesperson’s recent statement in which he viewed Chinese debt as a reason for Pakistan’s request for an IMF bailout package.

In reply to a query, he said that Chinese investment has not significantly increased the country’s overall foreign debt burden, adding that Pakistan would only be paying at least $300 million annually to China.

He claimed that the fund received from IMF would not be spent on repayment of Chinese debt.

According to him, the overall public debt was $95 billion and the country needed to make a repayment of $9 billion this financial year.

The minister also dispelled the impression that IMF has sought details about agreements with China, saying that the lender, in the initial talks, has asked about debt sustainability. “I have not been asked about the China Pakistan Economic Corridor,” the finance minister confirmed.

He admitted as long as the country does not remove the causes of increasing debt burden, the deficits will continue to haunt the economy.

“If one rupee is devalued against dollar, the burden of debt increases by Rs95 billion. Previous governments are responsible for the same,” he said, adding the only way to stabilize rupee was to increase the country’s exports, for which the new government has taken various steps like incentives to the textile sector and removal of regulatory duties.

Defending the government’s move to approach IMF, the minister said there was “no option left” for his government, as the current account deficit was increasing by $2 billion every month, while there were not enough reserves to pay off the import bill of two months.

Showing details, the minister said the reserves were recorded $18.925 billion when the previous government concluded the loan programme of IMF in October 2016. “But the fall of reserves continued afterwards and reached $8.408 billion in September 2018. The current account deficit which was $4.867 billion in 2015-16 has reached to $18.130 billion by the end of 2017-18,” he informed.

To a question, the finance minister claimed that his government may reconsider the IMF option in case the lender fixes conditions that Pakistan may not be able to accept.

On another query, the minister said Pakistan was in talks with Saudi Arabia for provisions of oil on deferred payment.

The minister on the occasion was accompanied by State Minister for Revenue Hamad Azhar.