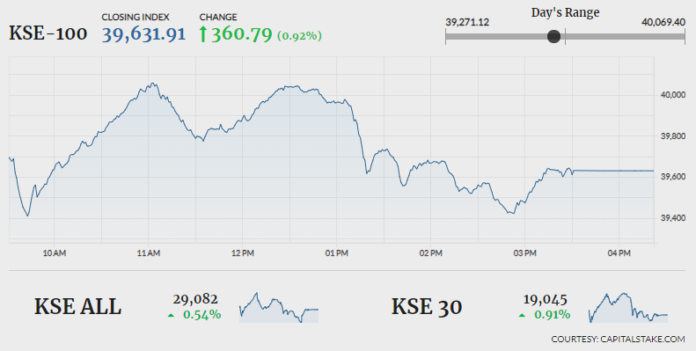 KARACHI: Investors of the Pakistan Stock Exchange (PSX) saw another good trading session on Thursday with indices inching further up.

The trend of foreign investors remained unchanged and they ended as net sellers on Wednesday with a net outflow of $9.68 million.

According to the news reports, the Economic Coordination Committee (ECC) of the Cabinet gave an approval for an increase in average electricity prices by at least Rs1.20 per unit or Rs10.35 to Rs12.91.

Trading volumes appreciated further from 333.64 million in the last trading session to 343.85 million. The Bank of Punjab (BOP +1.44 per cent) was the volume leader of the day with 25.47 million shares exchanging hands, followed by Lotte Chemical Pakistan Limited (LOTHEM +0.00 per cent) and K-Electric Limited (KEL -3.17 per cent) with 24.47 million and 23.40 million shares respectively.

The largest sector by market capitalization declined, lost 0.28 per cent even though the market trend was positive due to the decline in global oil prices. Pak Petroleum Limited (PPL) was up by 1.42 per cent while Mari Petroleum Company Limited (MARI) and Pakistan Oilfields Limited (POL) were down by 0.95 per cent and 1.49 per cent respectively.

Oil and Gas Development Company Limited (OGDC -0.82) also ended the day in red after the company announced its financial performance for the first quarter of Financial Year 2018-19 (1QFY19). An interim dividend of Rs2.75 was declared by the company. Sales appreciated by 41 per cent QoQ whereas the earning per share improved from Rs3.95 in the same period last year to Rs6.22.

“The market has welcomed the Saudi package which has eased off the situation Pakistan was faced with of late,” said former EFG Hermes Pakistan chief executive Muzammil Aslam.

On Tuesday, PM Khan had struck a 12-month deal for a balance of payments lifeline during a visit to Saudi Arabia, which will deposit $3 billion with Pakistan’s central bank and provide a matching deferred payment facility for oil imports.