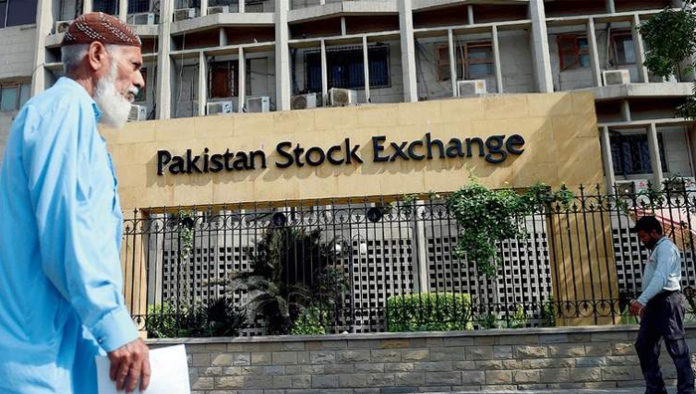 KARACHI: The Pakistan Stock Exchange (PSX) during the last trading week recorded a gain of more than 1,400 points, with an average daily turnover increasing by 7.07 per cent. The KSE-100 Index closed the week on a nine-week high at 42,004. This was also the first time since April that all five sessions of the week closed on a positive note.

The current wave of bullish trends in the country’s stock market has given investors renewed confidence. Investors during the week shrugged off all the political tensions, as the market witnessed an increase of 3.7 per cent despite fears of the country going towards a lockdown. However, foreign investors still remained net sellers offloading positions worth $12.62 million during the week.

It has been noted that the declining stock market managed to revive in the second half of October only after Prime Minister Imran Khan visited Saudi Arabia and secured a bailout package of $6billion, with expectations of a similar aid coming from the UAE. As the prime minister is currently in China, the capital markets are hoping that China will follow Saudi Arabia and provide Pakistan with financial assistance which would help bullish trends to sustain for the short term.

Commercial banks and cement sectors drove the market upwards during the week, adding 812 points cumulatively, while on the other hand, exploration and production chipped away 174 points.

The international crude prices continued to follow a downward trajectory on the back of waivers given to several countries on Iran sanctions, refuting supply constraints. This dragged the local exploration and production stocks under the hammer with MARI taking the biggest hit and losing four per cent in a single session.

According to an analyst, several blue chips and investment stocks, despite an overall gain in the index, muted due to the poor law and order situation in the country.

Among textile names, Nishat Mills showed the most notable uptick in earnings, reflecting a turnaround in fortunes for all export-oriented textile plays.

Stellar results in textiles were attributed to improved energy availability, weaker rupee giving traction to exports and better cashflows, as funds stuck in refunds and rebates with the government got released gradually, said an analyst from Habib Metrofinance Securities.

BMA Capital Management analyst said that the investors keenly await details of the financial package by China, as September 2018 result season is drawing to a close and high expectations are pinned on the PM’s visit to China.

The IMF programme mission is set to visit Pakistan in the coming week to discuss a potential bailout package for the country. This remains a key event for market participants.