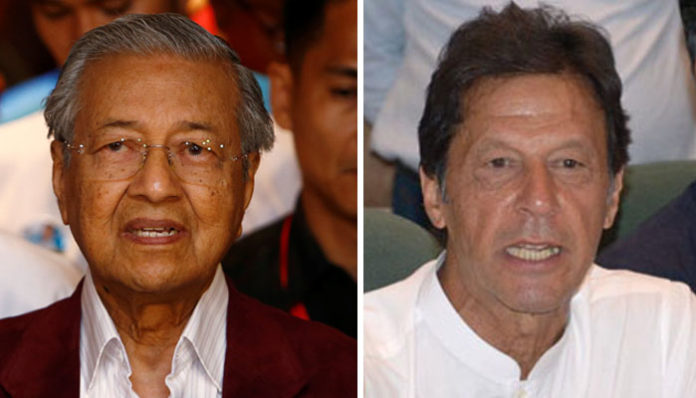 ISLAMABAD: As Prime Minister Imran Khan is expected to visit Malaysia after returning from China, the Ministry of Commerce has suggested to revise the Free Trade Agreement (FTA) or seek unilateral concession on a number of export items, as the existing bilateral trade was “highly in favour of Malaysia”.

According to sources, the prime minister will take up the issue of imbalance of trade with Malaysia owing to the huge import of palm oil. The exports to Malaysia remain highly negligible despite the FTA the two countries signed in 2008, they added.

Although the PM wanted to visit Malaysia early last week, it was later decided to postpone the trip until his visit to China. PM Khan will be leaving for Malaysia on the invitation of his counterpart Mahathir Bin Mohamad in the second week of November.

Earlier on October 18, Prime Minister Khan had made a telephone call to Malaysian Prime Minister Mahathir Mohamad during which both leaders invited each other to visit their respective states and agreed to extend cooperation in various sectors.

According to sources at the Ministry of Commerce, the major reason behind Pakistan’s negligible exports to Malaysia was that the items which have the highest potential for exports are either not part of Malaysia’s concession list or they are outright unfavourable for Pakistan, as competitors enjoy better tariff rates.

Although Malaysia’s exports to Pakistan amount to only 0.52 per cent of its total exports of $234 billion, the country managed to get concessions for its most important export to Pakistan i.e. palm oil, sources said.

As per the documents, 10 items amounted to 86 per cent of Pakistan’s total exports to Malaysia. These included cereals (rice), cotton, textiles and articles of apparel, and fish. Meanwhile, the top 10 items imported by Pakistan from Malaysia contributed to 85 per cent of total imports from Malaysia. These consisted mainly of palm oil (52%), machinery (7.82%) and mineral fuels (7.31%).

According to the sources, under the existing trade agreements, Pakistan has given 15 per cent discount in import duty on palm oil but has not received concessions in return despite being one of the largest consumers of the commodity.

The commerce ministry will reportedly suggest the government to convince Malaysia for more imports of rice from Pakistan. It has been noted that Malaysia buys 1 million tonnes of rice, however, not even 100,000 tonnes are exported from Pakistan.

After giving concession and preferential treatment to palm oil imports, Pakistan may ask Malaysia as well as Indonesia to give it a special treatment with regard to selected export items like rice.

Unfortunately, Pakistan has been asking Indonesia and Malaysia for opening the border for Kinnow and some other agricultural items. As per a report, palm oil is worth $550 per tonne whereas kinnows are not even $50. Pakistan may not have products worth up to $550 per tonne to balance out imports, but it does have rice valued at $350 per tonne, which should be exported instead.