ISLAMABAD: Planning, Development and Reform Minister Makhdoom Khusro Bakhtiar on Monday met Ambassador Yao Jing at the Chinese Embassy in Islamabad to condemn the attack on Chinese Consulate in Karachi.

Both sides on the occasion expressed their commitment to defeat the enemies of their friendship and to further expand cooperation under the China Pakistan Economic Corridor.

The minister said that the bilateral relations between Pakistan and China were time-tested, as both countries shared a long history of cordial, friendly and strategic cooperation in all areas and domains. “The entire nation is standing in support of Pak-China relations and cooperation under CPEC,” he added.

The minister termed the attack on Chinese Consulate as “a conspiracy to sabotage CPEC”. However, he said, “The detractors cannot hinder our resolve to successfully implement CPEC projects. Evil designs of such coward perpetrators would face a clear defeat.”

Bakhtiar informed that thorough investigations were being carried out to apprehend the perpetrators, their financiers, planners and facilitators.

During the meeting, both sides agreed on moving forward with CPEC by further strengthening and expanding its base.

Ambassador Yao Jing strongly condemned the terrorist attack against Chinese Consulate in Karachi, and appreciated the quick, prompt and effective action of Pakistan security and law enforcement officials who sacrificed their lives to protect the Chinese Consulate.

He said that the terrorist attack was an attempt to impact Pak-China relations and to harm CPEC. He stressed that Pakistan-China brotherhood was clad in iron and such cowardly attacks could not affect it.

The planning minister said that the government was fully committed to providing foolproof security to Chinese nationals working on CPEC projects across the country.

During the meeting, both sides discussed progress made on CPEC projects and preparation for the upcoming Joint Cooperation Committee Meeting, planned next month.

The minister said that Pakistan attached top priority to the promotion of socio-economic development and industrial cooperation under the apex bilateral forum of CPEC. 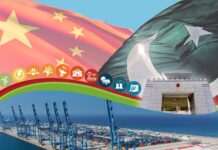