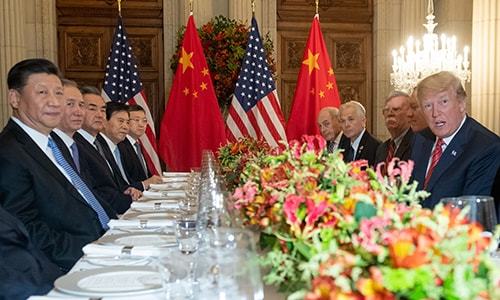 BEIJING: A United States-Chinese ceasefire on tariffs gives jittery companies and investors a respite but is no sign the two sides have changed stances in a war over Beijing’s technology ambitions that threatens to chill global economic growth.

China’s main market index was up 2.7 per cent, while Tokyo rose 1.0 per cent.

The outcome of the weekend Xi-Trump meeting in Argentina was “as good as we could have expected,” the chairman of the American Chamber of Commerce in China, William Zarit, said in a statement.

There was no sign, however, of progress in their core dispute: American pressure on Beijing to roll back industry plans that Washington says are based on theft and violate Chinese market-opening obligations.

“It’s impossible for China to cancel its industry policies or major industry and technology development plans,” said economist Cui Fan of the University of International Business and Economics in Beijing.

Trump’s promise gives Xi political room to negotiate after Beijing said earlier talks were impossible while Washington “holds a knife” of tariff threats to Beijing’s throat. But both leaders still face a complicated mix at home of economic nationalists, free trade advocates and other conflicting forces.

Without progress, Trump will face renewed pressure from hardliners to resume escalating the tariff fight.

China retaliated by raising its own charges on US imports.

The American complaints strike at the crux of a development strategy Chinese leaders see as a route to prosperity and global influence.

They have offered to alter details but reject pressure to discard blueprints such as “Made in China 2025,” which calls for state-led creation of Chinese champions in robotics and other fields.

Those are “central to Xi’s core agenda of making China an innovation superpower,” Michael Hirson, Jeffrey Wright and Paul Triolo of Eurasia Group said in a report.

It is linked to “intense geopolitical competition” with Washington.

Negotiators face a daunting agenda and a 90-day window to produce progress.

The weekend agreement indicates “dialogue will intensify,” but China will need to “agree to very substantial measures” to reach an agreement, said Rajiv Biswas of IHS Markit in a report.

Cui put the odds of an agreement at “higher than 50 per cent” but said he had no idea how long that might take.

Beijing previously agreed to narrow its trade gap with the US by purchasing more soybeans, natural gas and other exports but scrapped that after Trump’s tariff hikes went ahead.

Xi’s weekend agreement is along similar lines, pledging to buy a “not yet agreed upon, but very substantial amount of agricultural, energy, industrial” and other American exports.

Xi’s government has announced a drumbeat of changes this year that Washington and other trading might have welcomed at another time as progress. But they have been overshadowed by the tariff battle.

While Beijing retaliated for US tariff hikes by imposing penalty charges on American soybeans, autos and other goods, it has cut duties on factory machinery and other imports from other countries.

The government also has promised to ease limits on foreign ownership of automakers, insurance ventures and other companies.

Business groups welcome those changes but complain over other rules limiting access to markets including finance, logistics and agricultural technology.

Companies want a “genuine response to those concerns, with measurable goals,” Kenneth Jarrett, the president of the American Chamber of Commerce in Shanghai, said in an email.

Threats of additional US penalties loom in the background.

Trump has said he might consider raising tariffs on all remaining Chinese imports, or about $267 billion of goods. US Trade Representative Robert Lighthizer complained last week China’s 40 per cent tariffs on imports of US-made autos are higher than Washington’s 27.5 per cent rate for Chinese vehicles and said he was looking at ways to equalise US duties.